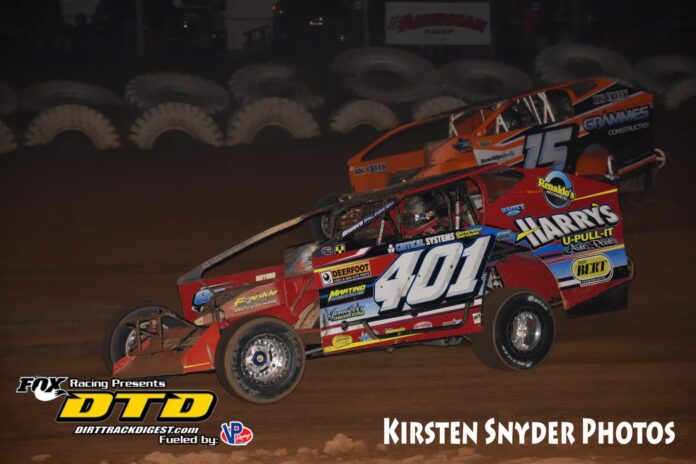 MINERSVILLE, PA – Saturday’s scheduled practice at Big Diamond Speedway went off without a hitch with over 40 cars covering multiple divisions taking part in the two and half hour scheduled session. Promoters Jake and Jasmine Smulley had the track in tip-top condition as the 358 modifieds who took part were turning fast laps around the four-tenths of a mile dirt oval.

With practice complete, all attention now turns to the big season opener on Friday, April 2nd as the track is set to begin its most anticipated season maybe ever with multiple divisions of racing scheduled to take place highlighted by the return of the ULMS Super Late Models (Friday, May 7th), the AMSOIL USAC 410 Wingless Sprints (Friday, April 23rd) and the high flying 410 Winged Super Sprints (Friday, August 13th).

But before we get there, it is the much-anticipated season open taking place next Friday night which will feature the Insigner Performance Modifieds going 25-laps for a first-place winners share of $4,000. The field of modifieds scheduled to compete this season at Big Diamond Speedway is second to none. With Big Diamond being the first track to open its regular Friday night season, expect a few northern invaders to make the trek down to Minersville, PA to take part on opening night. Winner of last Saturday’s Doug Hoffman Memorial race at Bridgeport Speedway Michael Maresca out of Potsdam, NY has made his intentions known that he plans to be on hand this Friday.

The USS Achey Open Sportsman will be in action opening night going for $1,000 to win their 20-lap feature event. With last year’s champion Brad Brightbill not expected to return, this division is wide open for the taking. Brandon Edgar who had multiple wins last year must be considered the favorite to take home the title in 2021 but I am sure there are others who are ready to challenge for the championship this season.

Back returning for their second year of competition will be the Savage 61 Crate 602 division. Last year the division saw only one repeat winner with that being Tyler Peet. Last year’s champion Cody Manmiller will be back to defend his crown, but the competition will tough as this division is expected to expand with many new teams waiting to compete in 2021. The 20-lap Crate 602 feature will pay $800 to the winner.

Last, but certainly not least will be the Red White and Blue Autos Roadrunner division. Last year the competition is this division was downright exciting to watch and with more teams expecting to attend this year, the racing can only get better if that is possible.

Once again in 2021, DirtTrackDigest.tv will partner with Big Diamond Speedway to provide all the action via pay-per-view if you cannot make it to the track.