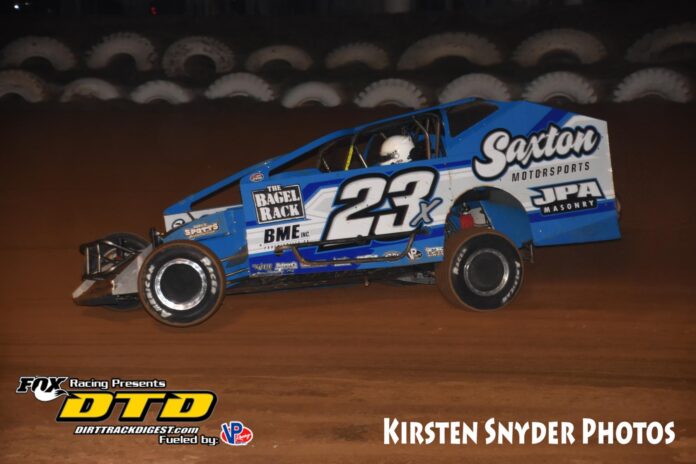 MINERSVILLE, PA – After a one week delay due to the weather, Big Diamond Speedway hosted their 2021 season opener to a crowd filled grandstand despite the occasional mist that permeated the damp chilly night.

After missing most of last season due to injury Timmy Buckwalter made a statement to the modified field last night that he is back with a vengeance. Buckwalter who won his first modified feature ever last year at Big Diamond was determined to pick up where he left off last season. Buckwalter lived up to that determination as he went out and led all 25 laps to win the Insigner Performance Modifed feature worth $4,000.

Buckwalter led the 24-car starting field to starter Jeff Merkel’s green flag after a small delay for a mist that had developed just as the field entered the track. Once the race got going, it was Buckwalter who took off from the pole to take the lead. Buckwalter continued to lead the way as the yellow was out on lap 3 for a disabled Jeff Strunk on the front stretch. Back to racing with Buckwalter leading when Billy Pauch Jr slowed with a flat tire on lap 5 to once again bring out the yellow.

When the race resumed, it once again was Buckwalter who showed he was the car to beat on this night as he rocketed away from second place running Alex Yankowski. Buckwalter and Yankowski continued to lead the field but the action behind the two leaders was hot and heavy as Kevin Beach, Duane Howard, Brett Kressley, Danny Bouc and Dominick Buffalino were going at it tooth and nail for positions in the top five. The race would be slowed one more time as Andy Burkhart brought out the yellow on lap 10. That would be the last caution of the race that would give the field a chance at Buckwalter. But Buckwalter was up to the challenge on this night as once again when the racing resumed shot out to a commanding lead over Yankowski. Buckwalter would go on to lead the remaining 15 laps to take his first win of 2021 over Alex Yankowski, Ryan Krachun, Duane Howard and Brett Kressley.

“We got off to a killer start last year until an unfortunate accident at Bridgeport put us down,” said a happy Buckwalter in victory lane. “But my guys never quit, and we made sure we worked all winter to get this thing fresh and try to come here and run every week. It was a good start, thanks to Monk for a good draw tonight, our draws since Florida have not been that good. It is easy when you start on the pole. They asked me over there what do I think about starting on the pole and if I like long or short races and I told them that I like the payout window!

Tim Fitzpatrick led wire to wire to win the USS Achey Sportsman feature. Fitzpatrick started on the outside pole and immediately jumped to the front over pole sitter Mike Schneck. With no cautions to slow Fitzpatrick’s pace, he was able to take his No. T102 to win the 20-lap feature by over a straightaway. Former sportsman champion Doug Hendricks was able to wrestle away second from Wayne Witmer in the last couple of laps to finish second. Mike Schneck ended up third with Witmer dropping to fourth. Brandon Edgar rounded out the top five.

Danny Buccafusca brought the Savage 61 Crate 602 Sportsman to the green flag with Joel Smith to his outside. Buccafusca took the lead at the drop of the green as the field thundered into turn one. Unfortunately for outside pole sitter Smith his race ended before a lap would be scored as he stopped in turn four. After a called back restart and another caution, fifth place starter Steve Lyle began to assert himself as he takes over the lead on the restart over Buccafusca. Lyle went on to win the 20-lap feature over 10th place starting Doug Snyder, rookie Logan Watt, Daryl Dissinger and Kevin Brady.

The always entertaining Red White and Blue Autos Roadrunners put on another exciting feature race with Andrew Fayash III taking the lead from Joe Bassininsky on lap 5 and hold off a strong challenge from last years champion Alex Schoffstal to take the win. Following Fayash III and Schoffstall across the line was Bussininsky, Jim Kost and Don Murphy.

The consi race was won by Craig Von Dohren

The heat races were won by Brandon Edgar and Tim Fitzpatrick

Did Not Start – Brandon Firestine and Eric Palmer

The heat races were won by Steve Lyle and Doug Snyder

The heat races were won by Matt Ney and Jim Kost