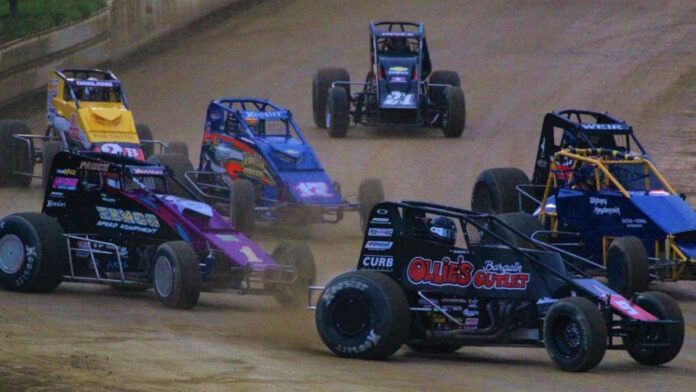 MINERSVILLE, PA – It’s been nearly a decade since the USAC AMSOIL National Sprint Cars have paid a visit to Big Diamond Speedway in Pottsville, Pennsylvania, but a new era begins as the hiatus comes to an end on Friday night, April 23, for the second round of Keystone Invasion.

The four-race Pennsylvania mini-series begins Thursday, April 22, at Grandview Speedway, before heading to Big Diamond for the first time since 2012 and concludes the weekend with stops at BAPS Motor Speedway on Saturday, April 24, and Path Valley Speedway Park on Sunday, April 25.

Chris Windom (Canton, Ill.) enters on a two-race winning streak at Big Diamond, albeit with the most recent victory occurring nine years prior. However, Big Diamond has been a special venue for the USAC career Triple Crown champ who won his very first career USAC National Sprint Car feature at the 3/8-mile dirt oval in 2010, then backed it up in the revisit there in 2012 with another triumph. In five Big Diamond starts, Windom hasn’t finished outside the top-ten with 9th place runs in 2007 and 2008 to go along with a 10th in 2008.

Series point leader and three-time USAC National Sprint Car champ Brady Bacon (Broken Arrow, Okla.) has two Big Diamond starts to his credit, both of which were top-ten runs, anchored by a 9th in 2008 and a 10th in 2007.

Robert Ballou has had many fine days in sprint car racing, earning the 2015 Eastern Storm crown as well as the 2015 USAC National Sprint Car championship. However, Big Diamond has not treated the Rocklin, Calif. driver kindly in his four previous appearances, finishing a best of 15th in 2007 and 2008, a 16th in 2009 and a 21st in 2012.

Thomas Meseraull (San Jose, Calif.) won his heat race and finished 13th in his lone venture to Big Diamond back in 2008. Meseraull will be competing throughout the duration of Keystone Invasion aboard the Tim Hogue No. 39.

Chase Stockon (Fort Branch, Ind.) debuted at Big Diamond during his first foray to the east in 2010, turning in a heat race victory and an 11th place result in that night’s feature. In the ensuing visit to Big Diamond in 2012, it was a proud night for Stockon who achieved his first career USAC “podium” finish with a 3rd place result behind Windom and Tracy Hines.

As you see, USAC hasn’t been completely absent from Big Diamond in recent years with the club’s Rapid Tire East Coast Sprint Cars presented by Capitol Trailers making eight appearances between 2018-20. Among them are Keystone Invasion competitors Steven Drevicki and Timmy Buckwalter, who have each won once there.

Carmen Perigo (Stoystown, Pa.) has four top-five finishes with the USAC East Coast Sprint Cars over the past two seasons with a 3rd and 4th in 2019 and a 3rd and 5th in 2020. Likewise, Craig Pellegrini (Buena, N.J.) has made two USAC EC Big Diamond starts with a best of 17th in 2019. Kyle Lick (Lehighton, Pa.) earned a solid 6th with the East Coast series there in 2018. Briggs Danner (Allentown, Pa.) debuted with the East Coast Series at Big Diamond late in 2020, but had some misfortune, ending his night early following the heat race.

The event will also feature Modifieds and Roadrunners at the event. Pits open at 5pm Eastern with grandstands opening at 5:30pm and hot laps at 7pm.

Adult admission tickets are $30, children 11-12 are $10, kids 10 and under are free and active military with valid ID are free.

The entire event from Big Diamond will be streamed live on FloRacing at https://bit.ly/3dgONXz.