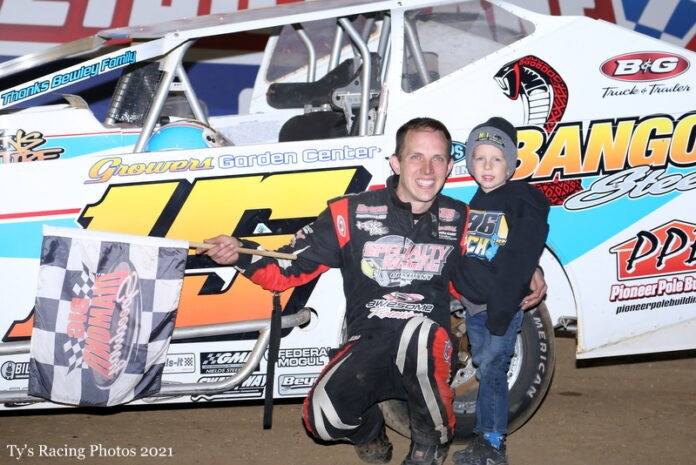 MINERSVILLE, PA – Under a beautiful spring night at Big Diamond Speedway with the USAC AMSOIL National Sprint cars on hand for the first time in almost a decade it was Billy Pauch Jr, Tanner Thorson and Andy Fayash III taking home the victories before a packed house.

It had been almost 21 months to the day since Billy Pauch Jr has stood in victory lane on a Friday night at the Big Diamond Speedway. July 26th, 2019 to be exact and it was a huge relief for the Frenchtown, NJ driver Friday night as he held off a determined Ryan Krachun for the win.

Eddie Strada and Jeff Strunk brought the Insigner Performance modified field to the green flag with Strada able to vault to the lead over Strunk. A yellow on lap three for Loudon Reimert slowed the race and on restart it was Strunk able to overtake Strada and take away the lead. A red flag only a few laps later for the No. 126 of Dominck Buffalino who slammed the turn three wall stopped the action.

Fortunately, Buffalino was okay after his hard but the same could not be said for the right side of the Hyneman No. 126 which showed significant damage. When we returned to racing it was once again Strunk taking charge in the Zubi’s Racing No. 88Z with Strada, Rick Laubach and a fast-moving Billy Pauch Jr who charging through the field. Strunk continued to lead the way with Pauch Jr moving by both Laubach and Strada to takeover second with Craig Von Dohren following Pauch Jr into third.

Strunk was maintaining a safe lead over both Pauch Jr and Von Dohren when disaster struck for the leader. Coming down the frontstretch, Strunk was attempting to go under a lapped car when his left front tire clipped the yuke tire ever so slightly but enough to cause Strunk to slowly spin bringing out the lead and handing the lead over to Pauch Jr. with Von Dohren and a fast-closing Ryan Krachun right on his heels.

Pauch Jr led the way on the restart with Krachun getting by Von Dohren to take over the second spot. Krachun who has shown so much speed in both races this year at Big Diamond was all over Pauch Jr as the leaders took the five to go sign. Coming around for the white flag Krachun made his move and went by Pauch Jr on the inside for the lead. As the leaders entered turns one and two it was Krachun showing the way but as Krachun was going through turn two he slipped up just a little and Pauch Jr was able to drive back around him to take back the top spot. Krachun tried one more move through the final set of turns but it was Pauch Jr taking the big win. Krachun finished second with Von Dohren, Laubach and opening night winner Timmy Buckwalter completing the top five.

“Ryan Krachun is a phenomenal drive and he’s come a long way,” as Pauch Jr talked about his last lap battle for the win in victory lane. “Ryan could’ve used me up there, but he gave me a lot of room and we were able to get back by and get the win. I was worried a little there at the end when I was starting to hang but I would rather be the mouse out front being chased by the cat than the other way around. It’s been a while since I have been here in my own No. 15 and my guys are awesome and are the ones who make this happen. This field is tough here, there might be only 28 cars, but 20 of them could win on any Friday night and it’s the toughest field around here on Friday nights in my opinion.”

The return of the USAC AMSOIL Sprint cars saw Jake Swanson take over the lead from his pole starting spot over his front row partner Tanner Thorson. Swanson continued to lead the way over Thorson opening up a one-second lead when the red flag was displayed for a flipping Brandon Mattox. Thomas Meseraull and Robert Ballou were also involved. All drivers were okay with Mattox and Meseraull done for the night.

Back to green flag action and Swanson was the leader and starting to pull away. With the halfway flags being displayed it was still Swanson leading the way but now Thorson was starting to move in on the leader. A caution on lap 16 for Nash Ely who slowed was the break Thorson was looking for. When the race resumed it was still Swanson but now Thorson was all over the leader looking for an opening to get by. As the leaders completed lap 19, Thorson committed to the high side going into turn one and went around leader Swanson to take over the top spot-on lap 20.

Once in front, Thorson easily pulled away and with only one more yellow to slow his pace scored his first ever win on the sprint division over Swanson, Kevin Thomas Jr., Brady Bacon and C.J. Leary.

“It feels good,” said a happy Thorson. “We’ve been working hard to get our car better and better and more comfortable for me. I don’t have very many starts, especially compared to most all of these guys, but I knew we could do it. It was just a matter of me getting comfortable with the car.”

The Red Whit and Blue Autos Roadrunners were also on the card for Friday night and once again it was Andy Fayash III taking the win for his second of the season and two in a row. Terry Kramer led the early laps with Don Murphy taking over the top spot-on lap seven. Fayash is on the move making his way towards the front and on lap 17 goes around Murphy to take over the lead and go onto victory. Murphy, Kris Ney, Seth Reichert and Kramer are your top five.