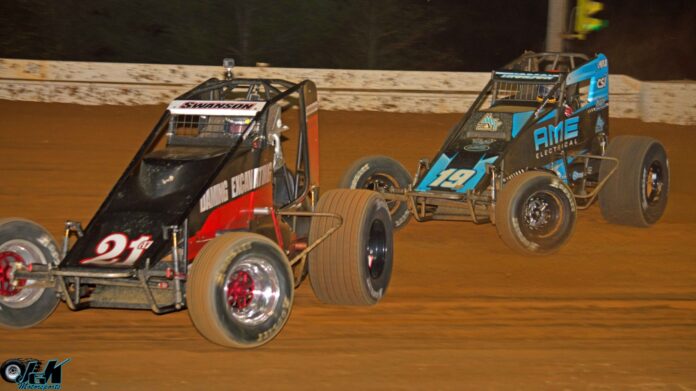 MINERSVILLE, PA – Tanner Thorson made clear his intentions to not just be known as the “top Rookie” with the USAC AMSOIL National Sprint Cars; he let it be known he’d rather be the top dog of the series as not only a contender for feature wins, but also for a title run.

Thorson (Minden, Nev.) took the first step on Friday night during the second stop on the Keystone Invasion tour in the series’ first visit in nine seasons to Pottsville, Pennsylvania’s Big Diamond Speedway, grinding his way around the outside of racelong leader Jake Swanson with 11 laps remaining to score his first career victory with the series in just his 13th career start aboard the Reinbold-Underwood Motorsports/AME Electrical – CSI – MVT/Spike/Stanton Chevy.

“This is not something in which I’d settle and be okay with just winning Rookie of the Year,” Thorson admitted. “We aren’t here for that. We’re here for the championship in the sprint car and the midget. We’re not done going forward; that’s for damn sure. We’re getting faster and faster and it’s just going to get better from here.”

In doing so, Thorson kept intact a run of first-time USAC National Sprint Car feature winners at Big Diamond dating back to 2007. All four drivers that have won with the series at the 3/8-mile dirt oval, in fact, captured their first series victory at Big Diamond: Ricky Stenhouse Jr. (2007), Cole Whitt (2008) and Chris Windom (2010). Whitt repeated his Big Diamond triumph in 2009 while Windom did the same in 2012.

Thorson, the 2016 USAC NOS Energy Drink National Midget champion and owner of 21 wins in the smaller-statured cars, started the 30-lap feature from the outside of the front row. Jake Swanson powered to the lead from the pole position, besting the all-Arizona based team front row with Swanson (#21AZ) gapping Thorson (#19AZ) in the early stages to the tune of a full second.

On the fourth lap, trouble ensued when 10th running Thomas Meseraull got sideways in turn four, collecting Robert Ballou (11th) and brand-new 10-lap track record holder Brandon Mattox (12th). Ballou escaped the melee and continued on while Mattox got the worst end of it, spiraling and flipping over. Meseraull’s evening was also finished. All drivers involved were uninjured.

Swanson, also seeking his first career USAC National Sprint Car victory on this night, blasted away from Thorson on the lap five restart, but nearing the halfway point, the interval had closed up with Thorson sniffing high and low for a way around Swanson. Thorson took a run at Swanson, diving to the bottom of turn one and sliding up, to no avail, but stayed right near the back bumper of Swanson when the two made slight contact halfway down the back straightaway.

After first-time USAC National Sprint Car feature starter Nash Ely stopped to bring out a caution on lap 16, during the yellow, Thorson showed a little bit of gamesmanship, pulling alongside Swanson to indicate he was in his presence, among other things.

As the green flag was displayed for the restart, Thorson was relentless, poking his nose to Swanson’s left and right before committing to the top all the way around turns one and two on the 20th lap, which propelled him around Swanson to secure the lead exiting the second turn.

A spin by series Rookie Ricky Lewis clamped down on Thorson’s 1.247 second advantage with just five laps remaining, resetting the deck and placing Thorson in a position to have to defend his throne up front from a potential haymaker. Swanson knew he had one shot, and one shot only. He took that shot at the entrance to turn one on the final, lap 27 restart, throwing it to the bottom and sliding up toward Thorson, but it wasn’t enough to overtake the position.

Thorson shuffled away without any qualms the remainder of the way, becoming the first “first-time” winner with the series since Stephen Schnapf on June 14, 2020, at Tri-State Speedway in Haubstadt, Ind.

“It feels good,” an elated Thorson said. “We’ve been working hard to get our car better and better and more comfortable for me. I don’t have very many starts, especially compared to all these guys, but I knew we could do it based off my past results where I was able to beat them. It’s just a matter of me getting comfortable.”

Most of Thorson’s previous experiences in sprint cars have come with a wing atop his car, but now, after a partial schedule one year ago and a full run this year, the experience level has gradually increased, which has coincided with his increased level of confidence.

“We’re making progress,” Thorson acknowledged. “This is the most comfortable I’ve been yet. A lot of that just comes with laps. There are many variables that go into making this car fast. We’re fast, but we weren’t “just there.” It’s all about fine-tuning the little things and we’ve just got to be faster and faster every time we go out.”

Jake Swanson (Anaheim, Calif.), who initially wasn’t even intending to make the trek out to Pennsylvania this week due to engine problems in his regular ride, teamed up with car owner Joe Daming, renumbered the car to #21AZ and has promptly recorded his two best finishes of the year in the last two races, a 5th a Grandview on Thursday and a career-best 2nd place result on Friday at Big Diamond after leading a race-high 19 laps in his Team AZ Racing/Daming Excavating – USW Cat Construction – RSS Industries/DRC/Tranter Chevy.

Kevin Thomas Jr. (Cullman, Ala.) turned in yet another fine performance, backing up Thursday’s 2nd place finish at Grandview with a 3rd on Friday at Big Diamond aboard the KT Motorsports/Dr. Pepper – McDonald’s – KT Construction Services/DRC/Speedway Chevy.

Meanwhile, 11 of the 26 cars in during the Fatheadz Eyewear Qualifying session at Big Diamond broke the former USAC AMSOIL National Sprint Car track record of 15.237 seconds, set by Levi Jones in 2012. Timmy Buckwalter (Douglassville, Pa.) led all challengers on this night with a time of 14.924, his third fast qualifying time of the season in just four series appearances this year.