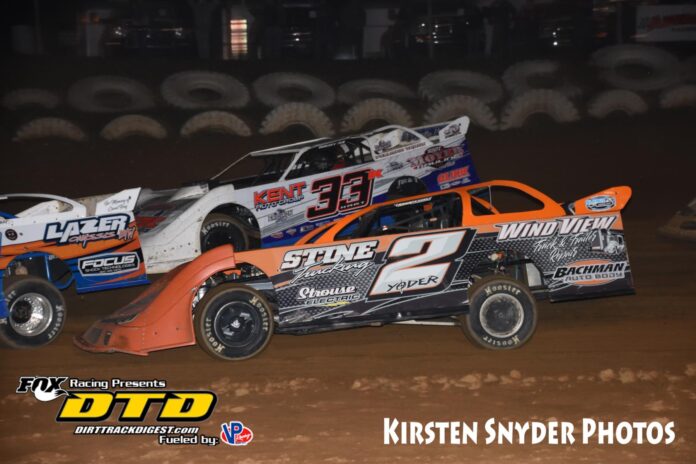 MINERSVILLE, PA – For the first time ever at the Big Diamond Speedway, promoters Jake and Jasmine Smulley present the Zimmer’s Service Center, Inc. United Late Model Series this Friday night May 7th. The fan popular ULMS series has grown dramatically over the past few seasons and the Big Diamond Speedway is welcome to have them aboard giving our fans a chance to witness the ground pounding late models as they twist and turn around the four-tenths mile dirt oval.

The No. 111 of Max Blair is the current points leader of the series with a 41-point advantage over the No. 24 of Dylan Yoder. Sitting in third position is Greg Satterlee driver of the No. 22 who leads the series in victories with three. These drivers along with the balance of the series regulars put on quite a show week in and week out and it will be a treat to have them bring their talents to Schuylkill County this Friday night for a $3,000 to win first place prize.

The mighty Insigner Performance 358 Modifieds will also be in action after a week off thanks to Mother Nature. The last time the modifieds raced it was Billy Pauch Jr returning to victory lane after a nearly two-year absence. Pauch Jr held off a determined Ryan Krachun for the win in a spirited last lap duel. Krachun who has arguably had the fastest car after two weeks of competition is a driver to look out for weekly in his quest for his first ever Big Diamond win.

Returning to the speedway this Friday will be the Savage 61 Crate 602 Sportsman division, this division has only raced once so far this season with Steve Lyle taking the win over Doug Snyder and Logan Watt.

Rounding out the schedule for Friday will be the Red White and Blue Autos Roadrunners. Andy Fayash III has been the man to beat so far in 2021 going two for two on the season.

Pit Gates will open at 5:00 PM on Friday with the grandstands opening at 5:30 PM.

Warmups will get the green light at 7:15 PM with racing getting underway at 7:45 PM

General admission for this Friday’s racing program is $28, Senior admission is $26. Kids under 16 are free. Active Military with a valid ID are also free.

We hope to see you all at the track but if you cannot make it, DirtTrackDigest.tv will have all the action live via pay-per-view.

Last Friday the “Money in the Mountains” race postponed due to the high winds which caused the track to lose power will be made up on Friday night May 14th. There will be a change in the rules. The MITM race will now be a SPEC HEAD SHOW ONLY, no Big Blocks. Spec head motors on gas must weigh 2275 and spec heads motors on alcohol must weigh 2350. 75 Show up points will go to all drivers.