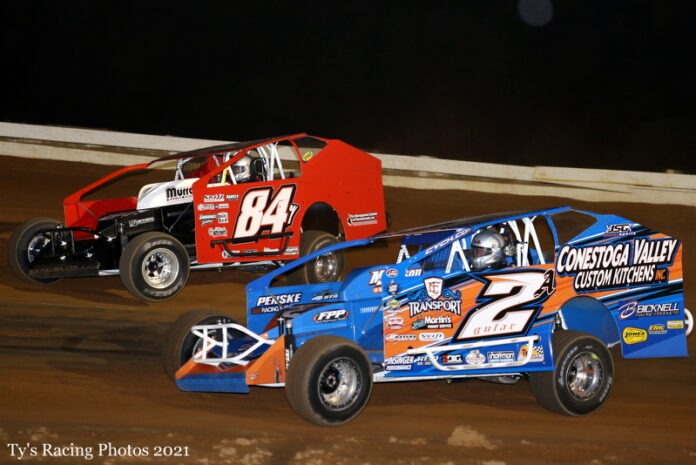 MINERSVILLE, PA – It was a busy night of racing on Friday at the Big Diamond Speedway presented by Tony’s Meat Market with five division in competition including the return of the ARDC Midgets. However, the big race of the night was the twice postponed Money in the Mountains race for the Insigner Performance modifieds and at nights end it was “Kid Rocket” Alex Yankowski standing in victory lane after a dominating performance in the No. 84Y. Shawn Jackson was the winner of the ARDC Midget feature with Brandon Edgar (Open Sportsman), Eric Palmer (Crate Sportsman) and Alex Schoffstall (Roadrunner) the victorious drivers.

Mike Gular would lead the field to the green in the 40-lap Money in the Mountains feature event and immediately take control of the race. Alex Yankowksi was on the move quickly and started to put the pressure on Gular after only a few laps were completed. A couple of early cautions slowed the pace of the race but when we returned to racing Gular was still in command with Yankowski hounding him from behind.

Lap nine saw the Covington Township, PA driver make his move. The preferred line seemed to be the bottom but Yankowski knew if he was to get by Gular, he would have to go around him at this point. Yankowski went to the outside in turns three and four and found the bite he needed to get around the 2020 Big Diamond Speedway champion and take the lead. Once in front, Yankowski was gone and opened up a safe lead as now Gular was left to battle with a hard charging Craig Von Dohren. Gular and Von Dohren battled clean and hard with Von Dohren finally getting by with only a couple of laps left in the race. By that time Yankowski was gone and went on to take the $5,000 first place prize over Von Dohren, Gular, Loudon Reimert and a hard charging Timmy Buckwalter.

Yankowski made it a clean sweep of the night winning his heat, the DirtTrackDigest.tv Dash for Cash worth $400 along the with Money in the Mountains feature race.

In the ARDC feature event it was Shawn Jackson who took the lead from his pole starting spot and immediately opens up a nice lead. Kenny Johnson aboard the No. 46 starts to rundown Jackson and by the halfway mark a good battle for the lead starts to ensue. Unfortunately for Johnson lap 11 proved to be his downfall as he tried the high-side and lost control and spun to bring out the race only caution. Jackson remained in command and unchallenged for the final laps and went on to take the win over Michael Markey, Jimmy Glenn, Jake Winters and Steve Craig.

The Savage 61 Crate 602 division was back on the racing card for Friday night with Eric Palmer in the No. 12E taking the big win. Palmer was your pole-sitter and took the lead at the start and never looked back as he led all twenty laps of the race. Joel Smith put some pressure on Palmer for the lead early in the race, but Palmer was able to keep the lead and dominate the race. Smith, Cody Manmiller, Danny Buccafusca and Tyler Peet rounded out the top five.

In the USS Achey Open Sportsman, it was Brendan Edgar getting back to his winning ways after a subpar performance on opening night. Chris Brennan who was the pole-sitter would also bring out the first caution on lap one. Second-place Nico Flammer would assume the lead on the restart with the No. 29 of Ken Eckert pressuring for the lead. Edgar who started in the seventh spot wanted in on the action and joined the top two for the lead battle. Lap nine, saw Eckert take the lead away from Eckert with Edgar also getting by to move into second. Eckert and Edgar battle hard for the lead as they race each other side by side never touching before Edgar finally gets by for good on lap 13. Once in front Edgar is able to open up the gap a little and goes on to take the win followed by Eckert, Wayne Witmer, Mike Schneck and Doug Hendricks.

Last years Red White and Blue Autos Roadrunner champion Alex Schoffstall returned to victory lane winning their 20-lap feature event. Pole-sitter Ronnie Suhr Jr would spin in front of the field at the start causing a big crash which took out a bunch of competitors. Schoffstall would take the lead after the cleanup and would go on to win over two-time winner this season Andrew Fayash III. Jesse Krasnitsky, Kris Ney and Alex Ditzler completed the top five.