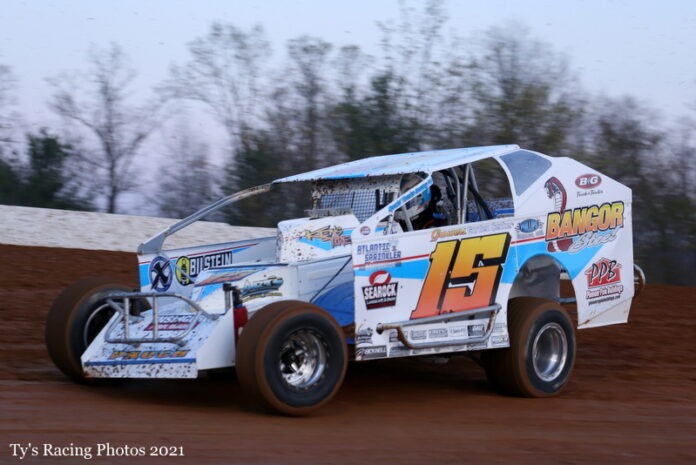 MINERSVILLE, PA – After going winless in the Insigner Performance Modifieds in 2020, Billy Pauch Jr has made it known that he is back in 2021 as he powered his way to victory last night in the 25-lap modified main event for the second time this season. Michael Burrows was the dominant winner in the USS Achey Open Sportsman division with Steve Lyle winning the Savage 61 Crate 602 feature. Alex Schoffstall was the Red White and Blue Autos Roadrunner winner with Landon Lewis the winner of the Central PA Legends feature.

Cliff Quinn and Corey Renninger led the Insigner Performance Modified field to the green flag with Quinn getting the jump to take lead on lap one. However, a hard charging Jared Umbenhauer was on the move from his fourth starting spot to take over second right away and by lap three had moved by Quinn to takeover the top spot. Jeff Strunk who was the winner the last time we raced brought out the first caution on lap six when he slowed coming off turn four.

Back to green and it is no start as Craig Von Dohren in the Dave Dissinger No. 88X slows and heads to the pits. Umbenhaurer continues to lead as we get back to racing with Billy Pauch Jr charging through the field and into third. As the field completes lap eight, a hard crash happens off turn four involving Renninger, Strunk and opening night winner Timmy Buckwalter. Buckwalter was able to drive away and continue after a trip to the pits but Renninger and Strunk were done for the night.

On the restart Umbenhauer continues to set the pace with Nick Rochinski and Pauch Jr giving chase, Pauch Jr goes by Rochinski one lap later to race into second and sets his sights on Umbenhauer. The last caution of the race would come on lap nine as Brett Kressley slows on the track. Back to green and Ryan Krachun slows to cause a no start.

When we get back to racing it is Pauch Jr shows he is the boss on this night as he powers around Umbenhauer going into turn one on the start to take the top spot away. Once in front, Pauch Jr would open a sizeable lead only to have it all go away with three laps to go as Pauch Jr was trying to put cars a lap down. Umbenhauer & Rochinski moved in on Pauch Jr quickly along with a hard charging Duane Howard and Alex Yankowski. Pauch Jr would weather the challenge to go on and take the win. Rochinski had his best run in a long time to finish second with Umbenhauer, Howard and Dillon Steuer who stole fifth away from Yankowski on the last lap.

“It was an awesome race, I hope it was good for the fans,” said a happy Pauch Jr. “I am glad we came here instead of going to Georgetown. My little guy (BP3) who is not here tonight watched about every week last year and so many times he would say that I never won a weekly race here last year and that is what got me going here this year. I wish my wife and the little ones were here, but they are coming tomorrow, were a racing family and that’s what we do. My guys are awesome and keep working at it and tonight we got it done. Thank you to the fans for coming out and we’ll see you on Tuesday.”

Shon Elk would lead the Savage 61 Crate Sportsman to the start from the pole. Elk would continue the lead with young Talan Carter staying right with the leader. Meanwhile, eighth place starter Steve Lyle was working his way through the field and enters the top five on lap five. Three laps later and Lyle gets by Carter for second and is pressuring Elk for the top spot. The first yellow of the race is displayed on lap 18 as we have a huge pileup in turn four which results in the red coming out as Kevin Brady flips. Brady was okay, but the #OINK car was not. After a long delay we go back to green and Lyle leads the last two laps to take the win over Elk, Doug Smith, Talan Carter & Tyler Peet.

After a dominating heat win earlier in the night, Michael Burrows went into the feature looking to do the same and that he did as went out and dominated the USS Achey Open Sportsman feature and take the win. Burrows who started on the outside pole grabbed the lead at the start and would lead all 20 laps. With limited cautions to hold him back, Burrows led from start to finish. Although the battle for the win was never in doubt, there was some great racing behind the leader with Mike Schneck, Tanner Van Dohren and Doug Hendricks all going at it for the spots in the top five. Burrows was the winner with Van Dohren, Schneck, Wayne Witmer and Ken Eckert Jr completing the top five.

Once again, it was 2020 points champion Alex Schoffstall taking the win in the Red White and Blue Autos Roadrunner division. It was Schoffstall’s second win of the season tying him with Andrew Fayash III in that category. Jesse Krasniktsky was the early leader with Kris Ney and Schoffstall making their presence know early on. Schoffstall would take the lead on a lap three restart and never look back as went on to take the win. Following Schoffstall across the line would be Kris Ney, Matt Ney, Fayash III and Don Murphy.

Landon Lewis would take the lead after leaders Guy Howard Moore and Scott Houdeshell came together hard on the backstretch which brought out the red flag. Lewis would assume the lead at that point and went on to dominate the remaining laps to take the win over Eric Hurst, Aaron Updegraff, Logan Carbaugh and Bryan Green.