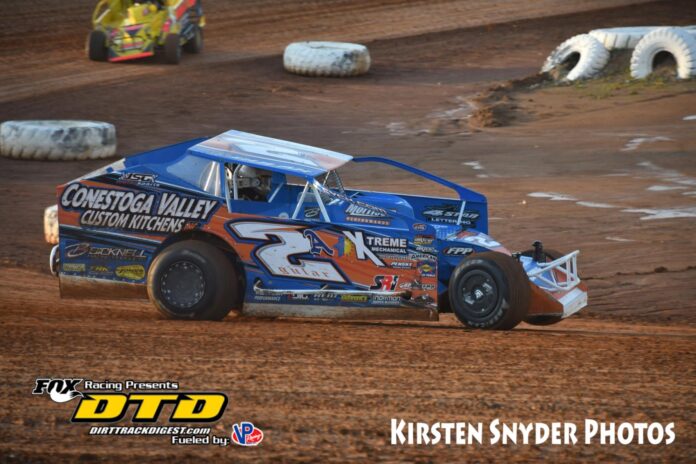 MINERSVILLE, PA – 2020 Big Diamond modified champion Mike Gular has not had the start to the season the team expected so far as he looked to defend his title. Mired back in the 19th in the season long standings going into Friday night, Gular would need nothing short of a miracle to defend his title after a myriad of problems to start the season. Friday night Gular took a huge step to get back into contention as he went out an won the 25-lap Insigner Performance modified feature holding off his good friend Jeff Strunk on S.A. Comunale night. Robbie Stillwaggon was the winner of the URC Sprint car feature with Doug Hendricks winning his first race of the year in the USS Achey Open Sportsman division. Kris Ney and Alex Schoffstall picked wins in the Red White and Blue Autos Roadrunner feature events.

Young Cole Stangle and Mike Lisowski would bring the 24-car field to the green flag in the Insigner Performance main event with Stangle jetting to the lead on lap one. Third place starting Mike Gular didn’t waste no time as he moved past Lisowski into second on lap three with Jeff Strunk following suit to move into third. A lap five yellow slowed the race as Brett Kressley came to a stop in turn four.

Stangle continued to lead at the start, but the veteran Gular was all over the 14 year old Stangle as he looked for the lead. Lap six saw Gular finally make his way past Stangle to takeover the top spot with Strunk now pressuring Stangle for second. Stangle was tough but on lap ten, Strunk was able to make his way by for the runner-up spot. Rick Laubach brought the yellow once again as he suddenly slowed on the backstretch.

Gular took command on the restart, but Strunk was all over the leader. Gular and Strunk raced side by side with Gular seeming to have the edge coming off the corners to remain in front. The two friends and leaders continued their torrid battle until about five to go when Gular was able to put a small gap on Strunk. Gular raced under starter Jeff Merkel’s checkered flag to take his first win of the season with Strunk in second. Stangle ran a great race to finish third with Timmy Buckwalter and Ryan Krachun rounding out the top five.

“It’s really good to be back here in victory lane,” as Gular mentioned in victory lane. “I have to thank my guys and Terry (owner Terry Fasnacht) and everybody who works so hard. We’ve had a dry spell here so far and really glad to be back here in the winner’s circle. I knew Strunk was close and when I saw him next to me on the restart, I knew I was in for a battle. I knew I had to make sure and hit my marks because of one bad push there and I knew he would be by me. We had a good hot rod tonight and it was a fast heavy track which is not usually my style, but we got it done and we’ll take it.”

The 20-lap U S S Achey Sportsman feature saw pole-sitter Mark Gaugler get together with Tim Fitzpatrick on the opening lap sending Fitzpatrick into a yuke tire and Gaugler being sent to the rear. When the race resumed it was fifth-place starter Doug Hendricks taking the lead with Tanner Van Dohren in tow and battling for the top spot. Brandon Edgar was on the move early on and moved by Van Dohren for second on lap four. The battle was now on between former champion Hendricks and the always fast Edgar as the two drivers raced nose to tail and side by side for the lead. Hendricks kept his No. 80 wound up on the high side as Edgar put the No. 57 down low lap after lap. Finally with four laps to go Hendricks would start to pull away over Edgar and race to the win. Edgar finished second with Michael Burrows, Van Dohren and Brad Roberts the top five.

The Red White and Blue Autos roadrunner division ran their make-up feature from last week to open the program with Kris Ney taking the win after leading the remaining 15 laps. Kris Ney was the winner winner with Jesse Krasnitsky, Andrew Fayash III, Don Murphy and Matt Ney the top five. In the regularly scheduled feature it was Alex Schoffstall taking his third win of the season. Matt Ney would take the to lead at the start with Schoffstall on the move and taking over the lead on lap seven. Fayash III would come through to challenge Schoffstall for the lead as the two multi-time winners battled hard but at the end it was Schoffstall taking the win over Fayash III, make-up feature winner Kris Ney, CJ Ferguson and TJ Fitzpatrick.