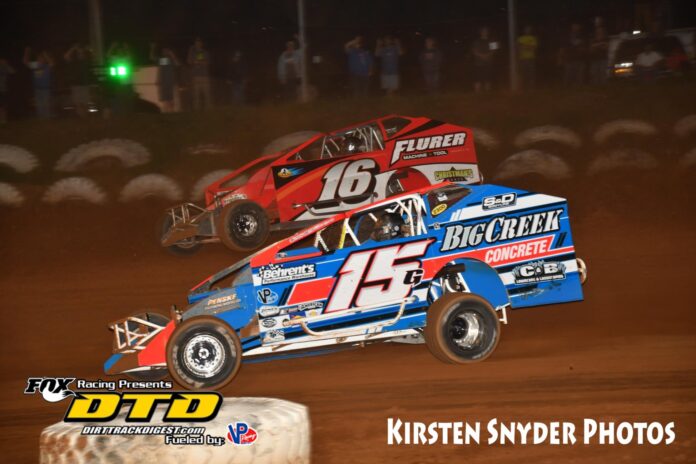 MINERSVILLE, PA – This Friday night, July 2nd at Big Diamond Speedway will be huge night or racing as the track presents it’s annual Georgie Stevenson Memorial races. On the racing card will be the Insigner Performance Modifieds, the Rapid Tire USAC Wingless 360 sprint cars along with the Savage 61 Crate 602 Sportsman and the Red White and Blue Autos Roadrunners. There will also be great fireworks show on tap for the fans!

For those who do not know, Georgie Stevenson was an avid fan of the Big Diamond Speedway along with his family. Georgie and his family supported the speedway religiously each week. Sadly, Georgie was diagnosed with cancer at a young age and while fighting the dreaded disease, the young man worked hard to raise money for cancer research. Georgie’s battle with cancer concluded at the age of twelve when the courageous young man passed away. Georgie loved the sport of dirt racing especially at his home track, the Big Diamond Speedway.

The Insigner Performance Modifieds will run five extra laps in their feature event with the winner taking home a $4,000 payday. 2020 Modified Champion Mike Gular got off the snide last Friday night taking his first win of the year over a stout Jeff Strunk. After three DNF’s in his last four races, leading Big Diamond Speedway feature winner Craig Von Dohren will be on the gas as he looks for win #100 at the track. After a disappointing 10th place finish last week, points leader Duane Howard who is still looking for his first Big Diamond win of the season will be raring to go to improve on what was a bad week for the No. 15G team. Two-time 2021 feature winner Billy Pauch Jr also had a bad run last week and will be back looking to avenge his bad finish and go for win number three. Big Diamond Speedway has arguably the toughest field of drivers on a Friday night with many potential winners in the field so whoever takes home the extra cash will no doubt have to work for it.

After being rained out on their first scheduled show of the year at Big Diamond, the Rapid Tire USAC Wingless 360 Sprint cars will look to make their 2021 debut this Friday night. The Wingless 360 division continues to grow every year with the competition being stout. A trio of young stars lead the way with Briggs Danner, Alex Bright and multi-time champion Steven Drevicki putting on great battles every race. The fans at Big Diamond are in for a treat this week as the wingless warriors look to put on a great show for the fans.

With a night off last Friday, the Savage 61 Crate 602 Sportsman will be back in action this week and raring to race. This division continues to put on great races with multiple winners so far this season. Steve Lyle leads the way in the race for the 2021 points title and will be looking to add to his lead on Friday night.

The Red White and Blue Autos Roadrunner division has turned into the Alex and Andrew show as Alex Schoffstall and Andrew Fayash III continue to dominate the action on a weekly basis. Schoffstall leads the way with three wins over Fayash’s two but due to Schoffstall missing a couple of weeks Fayash III has a commanding point lead as we head to July. Kris Ney won his first race of the season last Friday night and is starting to come on, but it will take quite an effort to dethrone the two big winners of the season.

As an added bonus to the three Big Diamond weekly divisions this week, the Big Diamond Dog Pound is putting up some big bonus money for the Modifieds, Crate 602 Sportsman and the Roadrunners. Pound keepers Brad Keitsock and Kevan Schaffer continue their support of the Big Diamond racers by collecting money through t-shirt and sticker sales along with donations from the rest of the Dog Pound members along with other fans. The extra bonuses are listed below.

Dog Pound co-leader Kevan Schaffer is also donating $300 in memory of his uncle Sonny Gradwell who raced at Big Diamond and other local speedways. Kevan will award $100 to the fifth-place finisher in the Modified, Crate 602 Sportsman and the Roadrunners features on Friday night as part of the Georgie Stevenson Memorial. The speedway would like the thank Brad, Kevan and the dog pound for their continued support of Big Diamond Speedway.

General admission on Friday night will be $25, Kids under 16 are free. Active military are admitted free with a valid ID.