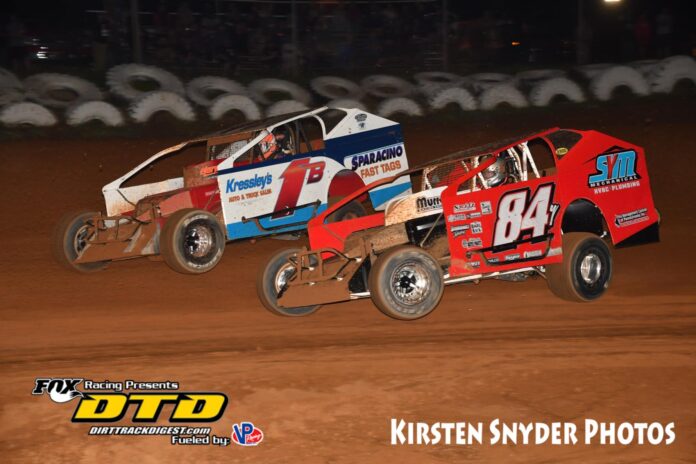 MINERSVILLE, PA – It has been a long time since Brett Kressley stood in victory lane at the Big Diamond Speedway, August 17, 2017, to be exact. Friday night on B & H Landscaping night, Kressley was able to hold off a late challenge from Ryan Krachun to record his fifth career win at the speedway in the Georgie Stevenson Memorial race. Alex Bright was the winner of the USAC East Coast Wingless sprint feature with Jonathan Swift taking his first career checkered flag in the Crate 602 division and Alex Schoffstall continued his winning ways in the Roadrunners.

Cole Stangle and Mike Lisowski brought the field to the green flag for the Insigner Performance Modified 30-lap main event with Stangle taking getting out front to lead lap one. A major crash developed on lap three when Craig Von Dohren slowed coming out of turn four with what looked to be front end issues. As the field charged out of turn four at full speed, cars piled into the slowing Von Dohren resulting in a red flag situation. Thankfully all drivers were okay, unfortunately the same could not be said for the modifieds of Von Dohren, Jared Umbenhauer, Louden Reimert, Rick Laubach, Dillon Steuer, Scott Alberts and Kyle Merkel many of whose cared suffered severe damage.

On the restart it was Stangle back to the front with fifth place starting Kressley now on the move. A lap six yellow for debris once again bunched up the field. Back to racing an Kressley works his way past Lisowski and into second place and starts to pressure the young Stangle. Kressley kept up the pressure and on lap eleven was able to wrestle the lead away from Stangle. Lisowski’s good run came to a stop one lap later as he slowed to bring out the yellow flag.

On the restart, Stangle surprised Kressley and got a good run coming off the topside to take back the top spot coming out of turn two, unfortunately Stangle’s lead would come to an end when the right rear tire went flat on lap 14 handing the lead back to Kressley. Alex Yankowski had now worked his way up the second spot with a battle looming for the top spot. During last week’s feature event, Kressley and Yankowski had some on track incidents causing Kressley to get disqualified. The anticipation of these two drivers battling for the lead had the crowd waiting for more. Thankfully both drivers kept their heads and proceeded to race each other clean as the battled for the lead side by side. Eventually Kressley gained some space on Yankowski and looked to be home free for the win.

Caution was out again on lap 24 when Matt Stangle and last week’s winner Mike Gular got hooked together on the back stretch and came to a stop. On the restart, the No. 23X of Timmy Buckwalter slowed to negate the green. Back to racing and Kressley was back to the lead but now a hard charging Ryan Krachun was now on the move getting by Yankowski to take over second bringing a strong running Nick Rochinski with him past Yankowski and into third. Krachun had the faster car and immediately started to apply pressure to Kressley for the lead. Krachun had the bottom side working and tried to work his way past Kressley as race neared to an end. The final lap saw Krachun dive low going into three and four and pull up alongside Kressley. Kressley was able to keep up his momentum up on the outside going down the frontstretch to take the big win and the $4,000 first-place prize. Krachun finished a close second with Rochinski third over Yankowski and Billy Pauch Jr.


“We really wanted to make it a point this year and get a win here,” said a happy Kressley. “I told the guys we have to do whatever it takes; we weren’t the best in the beginning of the year, but we’ve been plugging away with the setup, and we’re close now. I appreciate Ryan Krachun for racing me clean there at the end. The top seemed to be working better for me on the restarts and I was able to get a good launch off the corner especially after losing the lead there on the one restart when I took the bottom. I appreciate Big Diamond putting up the big money every week and hopefully we can get some more of it before the season’s done.”

Alex Bright took advantage of Briggs Danner’s misfortune to take home the win in the USAC Wingless 360 Sprint car man event. Tommy Kunsman Jr and Alex Bright led the field to the start with Kunsman taking the top spot and put some distance on Bright. Danner however was on the move quickly after starting in eighth and by lap four had caught the top two and got by both to takeover the top spot only to have a yellow come out to negate the passes.

The following restart saw Danner all over Kunsman for the lead as they raced hard for several laps. Lap ten saw Danner finally being able to get by Kunsman to takeover the top spot and quickly pull away to a big advantage. While Danner was dominating the race, Bright had caught back up to Kunsman starting to work on him for the runnerup position. Lap 19 saw disaster happen for Danner as he suddenly slowed in turns three and four. While the field was slowing, Steven Drevicki caught an inside yuke tire hard as he went for a ride. Thankfully Drevicki was okay. Bright who had just passed Kunsman for lead had to go back to second as the lap was not completed. On the restart it was Kunsman leading the way with Bright in pursuit. As the race was coming to an end, Bright caught back up to Kunsman and on lap 23 made the winning pass for the lead and the win. Following Bright and Kunsman across the line were Chris Allen, Colin White & Nash Ely

The ultra-competitive Savage 61 Crate 602 Sportsman division saw another first-time winner standing in victory circle as Jonathan Swift took the big win. Swift would take the lead from his pole starting spot and go on to lead all 20 laps while field battle behind him for the balance of the top five. Josh Mooney, Joel Swift, invader Steve Davis and Doug Smith were all fighting hard behind the leader Swift. Lap 16 saw the last yellow of the race, but Swift was not to be beaten on this night as he held off his competitors to take home the win over Joel Smith, Davis, Tyler Peet and Mooney.

Once again in the Red White and Blue Autos Roadrunner feature event it was a battle between the big two of Alex Schoffstall and Andrew Fayash III along with Ronny Suhr as those three battled tooth and nail for most of the race. Suhr would lead the way as Schoffstall and Fayash were racing side by side for the runnerup spot right behind the leader. As the trio headed to the white flag, Suhr and Fayash made contact as they both tried to avoid a lapped car with Suhr getting the worse of it as he spun out to bring out the caution. A one lap shootout ensued between Schoffstall and Fayash as the duo raced door to door on the last lap with Schoffstall edging out Fayash for the win. Matt Ney, Don Murphy and Joe Bassininsky completed the top five.