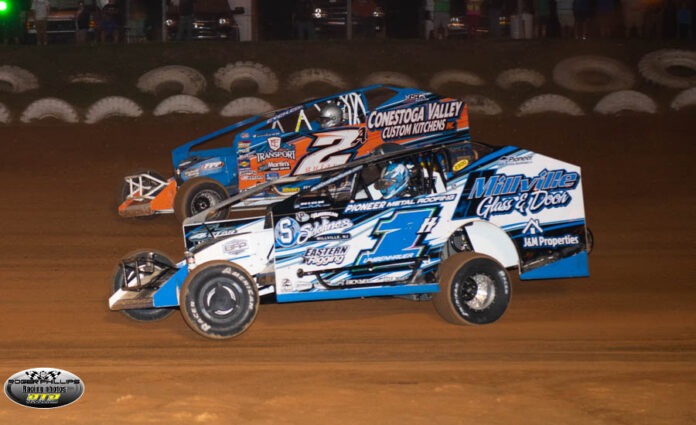 MINERSVILLE, PA – In a exciting run to the finish, Mike Gular held off a determined Timmy Buckwalter over the final five laps to take his second win in three weeks at Big Diamond in the Insigner Performance Modified feature. Michael Burrows also won for the second time this season in the USS Achey Open Sportsman division while Tyler Peet won his first race of the season in the Savage 61 Crate 602 class. In the Red White and Blue Autos Roadrunner division, it was Andrew Fayash III with a last lap pass of Alex Schoffstall to take the big win.

Shawn Light and Mike Lisowski would lead the 24-car field to the start in the 25 lap Insigner Performance Modified feature race with Light taking the front spot on the start. A lap two yellow would slow the action. Back to racing and Lisowski would take over the lead with Light, Rick Laubach and Mike Gular in hot pursuit but before a lap can be completed the car of Nick Rochinski would go around in turn three.

Gular would take the lead on the restart but a multi-car pileup in turns one and two would bring out the red flag and stop the racing. Cars involved were last week’s winner Brett Kressley, Light, Scott Albert, Loudon Reimert, Andy Burkhart, Dillon Steuer, Kevin Beach and Ryan Krachun. All drivers were okay but Kressley, Reimert and Burkhart were done for the night. When we finally returned to racing, it was Gular back to the lead and start to pull away until a lap four yellow slowed the action once again.

The lap four yellow would turn out to be the last stoppage of the race and when we went back to racing it was Gular who would pull away from his competitors as the battles raged behind him. Ninth-place starter Timmy Buckwalter was on the chip as he steadily moved up through the field and took over the runner-up spot on lap nine. Buckwalter was on a mission on this Friday night as he slowly started to make Gular’s big lead dissipate.

As the field took the five lap to signal from starter Jeff Merkel, Buckwalter had caught Gular by working the inside to perfection. Gular who was having trouble keeping his car down low as the race progressed was able to hold his line in the middle to top and stay ahead of Buckwalter who was charging the inside every lap. It looked like Gular was going to have a hard time holding off Buckwalter, but lapped traffic was Gular’s friend tonight as he was able to use the car of Heath Metzger as a pick to hold off Buckwalter and take the big win and the $3,200 first place winners’ money. Buckwalters gallant effort found him in second place with a charging Jeff Strunk in third. Point’s leader Duane Howard was fourth with Lisowski finishing in fifth.


“This is nice, we are getting there with this car,” said a happy Gular after his second win in three weeks at Big Diamond. “Jake (promoter Jake Smulley) is throwing everyone a curve with a different track evey weeks but that’s cool, it makes it exciting and a challenge for us. It was far different from last week and we’ll see what next week brings. I saw him (Timmy Buckwalter) there on the bottom and I didn’t have nobody to gauge myself off of most of the race so I figured if I could get around these lapped cars and pin him behind them that’s what I would do. He (Timmy) is a smart racer and the last lap there I just tried to block him off. Our car is really working good, these Bicknell chassis are great, Morrison gives us great power and Penske is hooking us up. I have to thank Dave Reedy (Penske Shocks), Terry (Fasnacht) who owns the cae and all my guys who put a lot of hard work into this thing. We missed the big one last week, but we still got tore up some and had a lot of work to do to get everything fixed up.

The USS Achey sportsman were back in action on Friday with Jeremy Hertzog and Glenn Rowan taking the field to the green flag. Tim Fitzpatrick would lead lap one from his fourth starting spot. Sixth place starter Michael Burrows moved through the top spots quickly to take over the lead on lap five with Tanner Van Dohren in tow and into second. Burrows was clean and green to the checkered flag points leader Doug Hendricks and Brandon Edgar charging through the field but with no cautions to bunch of the field it was Burrows cruising to the win over Hendricks, Edgar, Van Dohren and Mike Schneck.

It was Tyler Peet returning to victory lane for the first time in 2021 as he ran away and hid to win the 20-lap Savage 61 Crate 602 Sportsman feature. Peet who won twice back in 2020 had yet to find victory lane in 2021 until tonight. Kevin Brady would take the early lead from his outside pole starting spot. Peet who started eighth was showing early on that he meant business on this night as he charged through the field to take the top spot-on lap eight. Once in front it was all Peet as easily cruised to the win over Brady, Josh Mooney, Eric Palmer & Ryan Graver.

The Red White and Blues Auto Roadrunner feature turned out to be a barnburner as Andrew Fayash III and Alex Schoffstall put on a show for the fans in a caution filled race that was shortened to 15 laps due to the excessive yellows. Jim Kost would be the early leader until Schoffstall took over the top spot on lap six with Fayash following suit into second. The two veteran drivers would put on a show for the fans as they ran side by side cleanly for most of the remaining laps with Fayash III being able to sneak underneath Schoffstall for the lead and the win as they raced towards the checkered flag. Ronny Suhr Jr, Joe Bassininsky and Dave Schultz completed the top five.