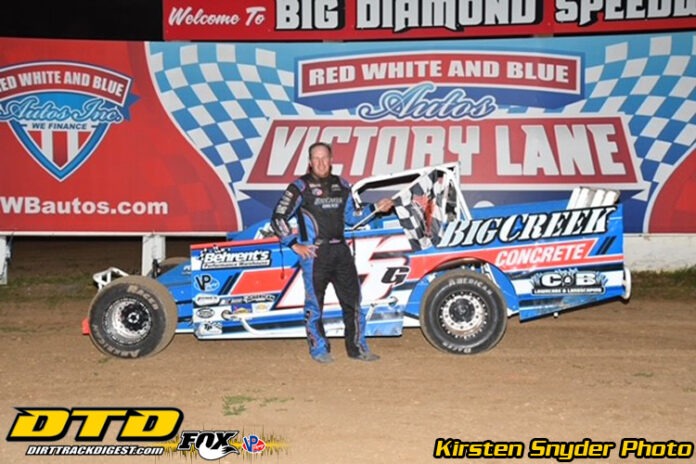 MINERSVILLE, PA – Duane Howard sits atop the Insigner Performance Modified standings due to a string of consistent finishes aboard the Butch Getz owned Big Creek Concrete No. 15G. In nine weeks of competition, Howard has only missed the finishing in the top ten one time with no DNF’s. The only thing the Howard / Getz team was missing so far in 2021 at Big Diamond Speedway was a victory. Howard put an end to that quest last night as he won the third annual “Topless” modified 25-lap feature. The Savage 61 Crate 602 Sportsman division saw yet another new winner as twelve-year-old Logan Watt won his first ever career sportsman main event. Ronny Suhr Jr was the winner of a highly competitive Red White and Blues Auto feature with Andrew Yoder winning the Limited Late Model feature.

Kevin Beach Jr and Mike Lisowski led the 23-car starting field to the green flag with Beach grabbing the lead on the start. The first yellow of the race was displayed on lap two as Scott Albert slowed. Before the caution was out, Duane Howard has already worked his way to fourth from his tenth starting spot. Back to green Loudon Reimert takes the lead away from Beach as Howard goes by Lisowski to take over the third spot. Lap three saw the yellow out again, this time for Rick Laubach.

We go back to racing and Reimert continues to lead with Howard now up to second as he vaulted by Beach. Craig Von Dohren would bring out the third caution of the race on lap seven as he had problems in turn two. This time when the race restarted, Howard was not going to be denied as he powered the Performance Engines by Billy the Kid, Bicknell chassis No. 15G around Reimert for the lead. While Howard was trying to put some distance on the field, Ryan Krachun was on the move as he now raced into second and start running down the leader Howard.

Jeff Strunk slowed on the front stretch on lap 10 bringing out another yellow. Howard got the jump on the restart but Krachun still looking for his first ever win at Big Diamond was right there and when Howard left a hole open on the bottom Krachun powered his way past the multi-time Big Diamond champion and into the lead. Krachun was starting to pull away from Howard when the last yellow of the night was put out for Louden Reimert who spun in turn three.

Howard was as determined as ever on this night and knowing this might be his last chance of getting back to the lead powered by Krachun on the outside to reassume the lead only to have the yellow come out to negate Howard’s pass. That was no problem for the Oley, PA driver as he did the same thing on the ensuing restart to take the lead away from Krachun. Once in front this time, Howard never looked back as he was able to put some track between himself an Krachun to take his first win of the season and his 85th career win at Big Diamond. Krachun finished second for the second week in a row with last week’s winner Mike Gular in third. Brett Kressley and Jared Umbenhauer rounded out the top five.

“It was nice being topless tonight and man it’s been a freaking long time,” said a happy and relieved Howard in victory lane. “I got to thank Butch (car owner Butch Getz) for sticking with us, we had some bad race cars I couldn’t give Butch the feedback he needed. Butch has done a helluva a job setting up the race car the last two weeks. It was all about being comfortable and finding a good line and Butch and the crew work so darn hard at this and we needed to show what we can do, and tonight was the start of that. I could roll the top really well early, and I thought the bottom was too free and loose, but I spun the tires there getting off turn four and Ryan (Krachun) got by me and fortunately I was able to get back by him and I had such a good car that I wasn’t giving this one up. Jake (promoter Jake Smulley) had a nice racetrack for us tonight, it was dust free with two lanes and that’s what you need.”

In the Savage 61 Topless Crate 602 Sportsman feature event we not only had a first time Big Diamond Speedway winner but a career first winner in teenager Logan Watt. Logan, the son modified driver Ryan Watt won in only his fourth start of the season. Polesitter Shon Elk brought the field to the green flag and leads lap one. Third place starter Logan Watt makes quick work of outside polesitter Jonathan Swift to move into the second spot as the field completes lap four. The red flag is displayed on lap eight as Zane Roth rolls over in turn three and is okay. On the restart Watt powers around Elk to take the lead as Danny Buccafusca moves by Elk and into second. Watt would survive a lap 17 restart and pull away for the crowd-pleasing win. Buccafusca held on for second over a hard charging Steve Davis with Elk in fourth and Doug Smith in fifth.

The Red White and Blues Autos main event was a scorcher as a total of five drivers would battle for the win over the last half of the race with Ronny Suhr Jr holding off the quartet of Andrew Fayash III, Matt Ney, Alex Schoffstall and Kris Ney. Suhr took the lead on lap two with Matt Ney moving to second as multi-time 2021 winners Fayash III and Schoffstall were working their way forward. Kris Ney joined the party as well and the battle these drivers put on was simply fantastic as they sliced and diced with each other without touching putting on a show for the fans. Suhr Jr emerged from the battle as the winner with Fayash III, Matt Ney, Alex Schoffstall and Kris Ney the top five.

The Limited Late Model main event saw Andrew Yoder take the lead on lap one and never look back as he dominated the feature event to take the win in a race that went start to finish with no yellows. Previous winner at Big Diamond Travis Mease held off the charges of Shawn Merkel and Wayne Pfiel to take second with Merkel, Pfiel and Miller completing the top five.