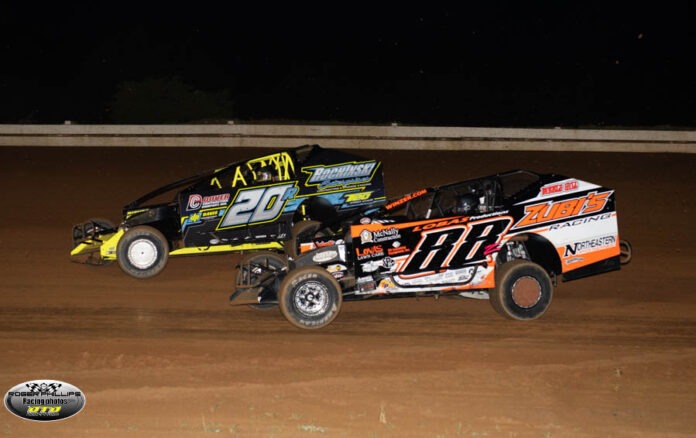 MINERSVILLE, PA – After weeks of battling uncertain weather, Mother Nature finally gave Big Diamond Speedway a great night for racing and provided us with sunny skies and no threat of rain. It was a big five division night of racing and Jeff Strunk was the winner of the Insigner Performance Modified feature for the second time in 2021. The PASS/MASS 305 sprints made their first start of the season with Kevin Nagy taking home the checkered flag. Tim Fitzpatrick won the U.S.S. Achey Open Sportsman main event for his second win of the year and Doug Smith was a first-time winner in the Savage 61 Crates. Alex Schoffstall continued his winning ways in the Red White and Blue Autos Roadrunner.

Scott Albert and Kevin Beach Jr would lead the field to starter Jeff Merkel’s green flag in the 25-lap Insigner Performance Modified feature event. Albert was looking good on this night as he rocketed away from Beach on the start to take control of the race. Jeff Strunk was a man on a mission as he was taking a fast track towards the front from his sixth starting spot. Lap two saw Strunk make his way into the second spot as he was charging on the outside.

Albert was setting a torrid pace out front and had built up close to a straightaway lead at this point. That was not problem for Strunk who started running down Albert and had moved in considerably on the leader. Lap ten and Strunk is there putting the pressure on Albert. Albert and Strunk are side by side on lap eleven with Strunk taking over the top spot as lap twelve was scored. Once in front Strunk continued to hit his marks as he sped away from the field to take the dominating win in the nonstop race. Albert’s great run found him finishing second over Craig Von Dohren, Mike Gular and Louden Reimert.

“This car was spot on tonight,” said an excited Strunk in victory lane. “This is the same car that we won with at Bloomsburg, and I think in the last five races we have had 3 wins a second and a third. We are performing and we are getting the breaks and lady luck is on our side right now and that is all you can ask for. I have a great car owner in Zubi (Dave Zubikowski) and a great crew along with a great bunch of supporters that keep us coming here and if it weren’t for them, we wouldn’t be here in victory lane tonight. Thanks for the cheers and thanks for all the fans coming out and thanks to Jake (Big Diamond owner Jake Smulley) for a great track tonight.”

The PASS/MASS 305 feature race got off to a bad start with a major crash on the start right at the flagstand resulting in a red flag, thankfully all drivers were okay. Devlin Adams grabbed the early lead from his third starting spot with sixth place starting Kevin Nagy quickly making his way towards the front. A lap five restart saw Nagy take the lead as he then proceeds to check out on the field running the extreme outside. Tim Tanner Jr charged from starting deep in the field to finish second over Adams, Tyler Cochran and Cody West.

The Savage 61 Crate 602 feature event produced another first-time winner as Doug Smith stood in victory lane for his first win of his career. Kyle Kania would take the early lead from his pole starting position with Doug Smith on the move using the outside groove to take second on lap four. A lap nine restart was what Smith was looking for as he made his way around Kania to take over the top spot. Once in front it was all Doug Smith as kept a safe distance between himself and second place Kania. Joel Smith finished third with Steve Lyle and newcomer Grant Hilfiger completing the top five.

Tim Fitzpatrick held off a charge from Brandon Edgar to win his second U.S.S. Achey Open Sportsman feature of the season. Fitzpatrick would rocket from his third starting spot to the lead as the field completed lap one. Edgar was quickly ascending his way towards the front and by the halfway mark was starting to apply the pressure to Fitzpatrick for the lead. Edgar tried everything to make a move for the lead but on this night, Fitzpatrick had the better car being able to hold off Edgar’s charge and being able to put a small gap between the two. Fitzpatrick took the win over Edgar, Doug Hendricks, Mike Toth and Tajae Adams.

It was not a vintage feature for the Red White and Blue Autos Roadrunners last night as the main event was plagued by yellows throughout the 20-lap race. Don Murphy would lead lap one as the dynamic duo of Alex Schoffstall and Andrew Fayash III would charge through field. This week is was Schoffstall who made his way to the front first taking the lead away from Murphy on lap five. Schoffstall manage to steer clear of the carnage the remainder of the race to take the win over last week’s winner Ronny Suhr Jr, Fayash III, Murphy and Jim Kost.