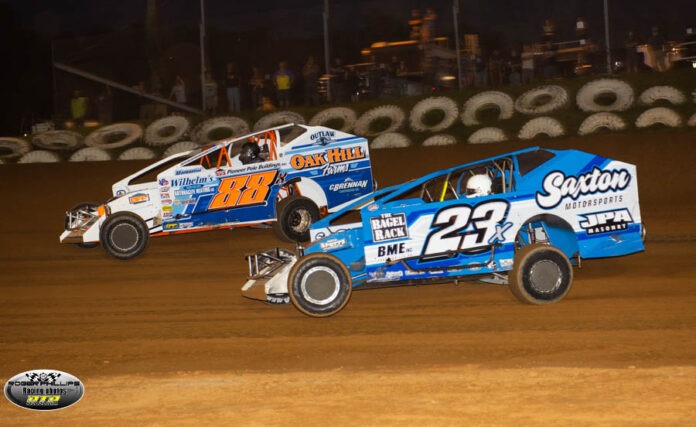 MINERSVILLE, PA – It might have taken a little longer than expected and it definitely did not come the way it was expected but when all was said, and it was Craig Von Dohren standing in victory lane and celebrating career win number 100 at Big Diamond Speedway. Steve Davis once again invaded the speedway and came away with the win the Savage 61 Crate divison part of the Andrew Fayash Memorial race and Doug Hendricks continued his run to the 2021 title as he won the Open Sportsman portion of the Andrew Fayash Memorial. In the Red White and Blues Autos Roadrunner class, it was TJ Fitzpatrick with the win.

It was a wild and wooly Insigner Performance Modifed feature to say the least with the driver who crossed the line second standing in victory lane after a tumultuous last lap. The 25-lap feature got underway with Kevin Beach taking the lead from his outside pole starting spot. It was yellow fever early on with cautions coming out on laps one, two and four all for minor incidents. Despite the yellows, there was some good racing throughout the field and on the second lap, it was Jared Umbenhauer driving his dad Tom’s No. 5 tonight take over the race lead. Brett Kressley who started seventh and looked extremely fast in his heat race was on the move and had moved into the runner-up spot when the yellow came out on lap 12.

Umbenhauer chose the inside lane on the restart with Kressley to his right on the outside. Umbenhauer fired first but Kressley timed it right and was right alongside Umbenhauer as the top two raced down the front stretch. Kressley was able to keep the momentum going and beat Umbenhauer into turn one to take over the top spot and looked to pull away. However, a lap 13 yellow slowed the field once again pitting the two rivals alongside each other once again. Kressley chose the top lane on the restart and once again they raced door to door down the front on the restart. This time Umbenhauer was able to keep pace with Kressley and as the two raced into turn one there was contact and as they exited turn two it was Umbenhauer back out front as Kressley slipped back to third as Craig Von Dohren was able to slip by as well.

Kressley wasn’t through yet and worked his way past Von Dohren and back to second determined to catch back up to the leader Umbenhauer. With five to go, Kressley was working the outside lane and caught up to Umbenhauer. Kressley could get up along Umbenhauer through turns one and two and with three laps to go was alongside of the leader as they raced down the back stretch. The racing was intense amongst the two leaders with Umbenhauer and Kressley using all of the back stretch and then some as Kressley found himself over the edge on multiple occasions, but he never lifted and kept pace the with Umbenhauer. Coming into turn three on the last lap it was Kressley driving it in deep making contact with Kressley who spun in the middle of turns three and four as Kressley kept it straight and crossed the finish line taking the apparent win. However, Big Diamond officials made the call to penalize Kressley to the tail end of the lead lap thus making Von Dohren who had crossed the line in second place the winner. I am sure it was not the way that Von Dohren wanted to win his 100th Big Diamond race but it was a win, nonetheless. Louden Reimert, Dillon Steuer, Alex Yankowski and Timmy Buckwalter the top five.

“I don’t know what to say,” said a stunned Von Dohren in victory lane. “I didn’t really see what happened on the last lap, I was just trying to concentrate on what I was doing and staying on the bottom lane. 100 wins is a lot of wins here or at any track for that matter and I’ve made my share of mistakes here over the past few weeks trying to get this win and now we’ve started to correct those mistakes and it is starting to show. There are so many people to thank starting with my parents, the No. 126 team, Bob Faust, the No. 114 and others and this team (No. 88X) is very good. Dave (Dissinger) gives us what we need and I know there are others I forgot to mention.”

Doug Hendricks kept up his winning ways in the U.S.S. Achey Open Sportsman division taking his second win in a row and putting a stranglehold on the 2021 points title. Matt Clay would take the lead at the start as the third place starting Hendricks immediately starting to put pressure on Clay for the lead. Hendricks was able to work himself past Clay on lap eight for the lead and once in front it was all Hendricks as he set sail on the outside lane which has become his signature groove. Hendrick would dominate the remainder of the nonstop race and take the big win along the $1,157 first place prize. Clay would hold on to finish second with Tanner Vandoren, Ken Eckert and Tim Fitzpatrick the top five.

The Savage 61 Crate 602 saw the traveler Steve Davis invade the speedway in the Mascker No. 72 and take home the big win. Doug Smith led from the outset taking advantage of his pole starting spot. Smith started to check out on the field, but the second-place starter Davis had other ideas as he slowly started to run down Smith. Lap 14 saw Smith and Davis coming up on traffic which would prove to be crucial. The leaders split the lapped cars and coming out on top was Davis as they raced into turn one. Smith’s good race came to an end as he spun on lap 19 bringing out the only yellow of the race. A one lap shootout ensued but Davis was up the task as he raced under the checkered flag to take $1,157 winner’s check. Logan Watt ran a steady race to take second with Eric Palmer, Danny Buccafusca and Ryan Grim the top five.

The Red White and Blues Autos Roadrunner had a rough go of it as the race was shortened to twelve laps as they exceeded their time limit. CJ Ferguson led lap one with points leader Andrew Fayash III taking over the top spot on a lap three restart. A late race restart set up a three car battle for the lead TJ Fitzpatrick getting by Fayash to take the win. Alex Schoffstall was also able to get Fayash to finish second with Fayash having to settle for third.