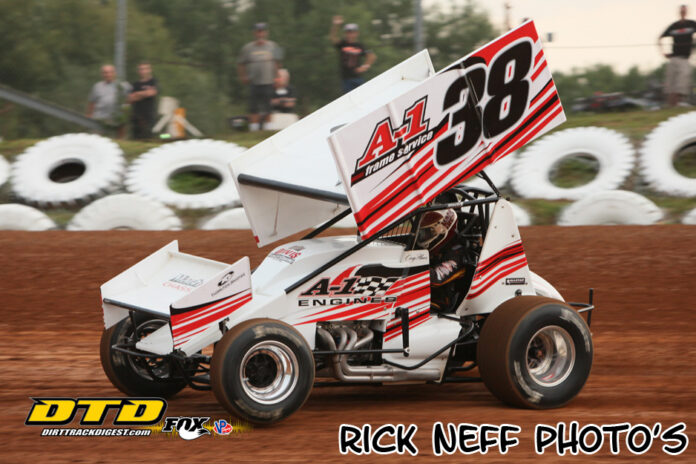 MINERSVILLE, PA – It has been eight years since the mighty 410 Sprint cars have taken to the track at Big Diamond Speedway. Friday night the popular class made their return to the track with Cory Haas taking the big win. In the Savage 61 Crate 602 Sportsman division it was Kevin Brady turning his season around with the big win. The Red White and Blue Roadrunners raced four eight-lap main events labeled as the Crazy 8’s with points leader Andrew Fayash III winning two features and Alex Schoffstall and Don Murphy each taking a win.

Cory Haas and Mark Smith led the field to the green in the 30 lap Sprint feature with Haas outgunning Smith for the lead. Chad Trout worked his way past M Smith and into second when the first yellow of the race was displayed for Billy Dietrich who spun his No. 8 in turn two. Haas continued to set the pace on the restart as he sped away from Trout. Trout found his groove and was running down the leader Haas when he caught a piece of the yuke tire coming out of turn four which sent him shooting to the fence coming down the front stretch. Trout hit the outside fence hard causing the No. 1X to flip bringing out the red and ending Trout’s good run.

When racing resumed, Haas continued to lead the way when the last yellow of race was out for the No. 6 of Ryan Smith slowed just past the start/finish line. Haas continued to pace the field when the green flag was back out with Mark Smith in tow as Austin Bishop maneuvered his way to third. Nothing had anything for Haas on this night as he motored away from M Smith to take his first ever Big Diamond Speedway win along with the $4,500 winner’s check. Mark Smith was second with Bishop, Kyle Moody and Tyler Ross the top five.

“Car was pretty good, especially for being on seven cylinders from lap one on,” said the victorious Haas in victory lane with track announcer Dino Oberto. “I don’t know how it made it, but it made it and it was pretty good right around the bottom. You know Mark Smith gets around pretty good here and has more races here and I haven’t been here since I think 2002 or 2003. This race fit our schedule pretty good, and our owner Buzz is from Scranton are and this is about halfway in between, and we wanted to try this car a motor. We had troubles with this motor before and we had troubles with it again tonight, but it held together, and we were able to get the win. You can’t thank Big Diamond Speedway and the people who put this race on. Unfortunately, there weren’t that many cars here, but I know how some of those guys feel, you race all year long and you finally get a Friday night off but to not support a race that pays like this I just don’t get it. Like I said, thank you to the track, all the workers and to the fans for having us and it really was a good racetrack. Hopefully they have us back and the support is better from the racers.”

The 20-lap Savage 61 Crate 602 Sportsman feature saw Kevin Brady overcome a season of troubles to win his first race of the season in No. OINK car. Brady took the lead from his pole starting spot at the drop of the green. An early rash of cautions led to single file restarts and when the race finally got going Brady led the way as the field hugged the bottom. Brady went on to take the win over Kyle Kania, Tyler Peet, Doug Smith and points leader Steve Lyle.

The Red White and Blue Autos Roadrunners division held their Crazy 8’s night on Friday night which consisted of four 8-lap feature events. Race #1 saw points leader Andrew Fayash III take the lead away from Dave Daubert on lap two and dominate the rest of way to take the win over Joe Bassininsky, Jim Kost, Jesse Krasnitsky and Don Murphy. Race #2 saw Tonya Lance lead lap one with Dave Schultz taking over on lap two. Leading feature winner Alex Schoffstall took over the top spot on lap six but Don Murphy surprised Schoffstall on a lap six restart to take the lead and was able to hold off Schoffstall to take win. Jesse Krasnitsky, CJ Ferguson and Fayash II completed the top five. Race #3 say Schoffstall redeem himself as he grabbed the lead away from Fayash III on a lap five restart to take the win. Fayash III, Murphy, Kost and Kris Ney were the top five. Race #4 saw Fayash III hustle to the lead early on after starting seventh to take his second win of the night over Kost, Murphy, Greg Zelinsky and CJ Ferguson.