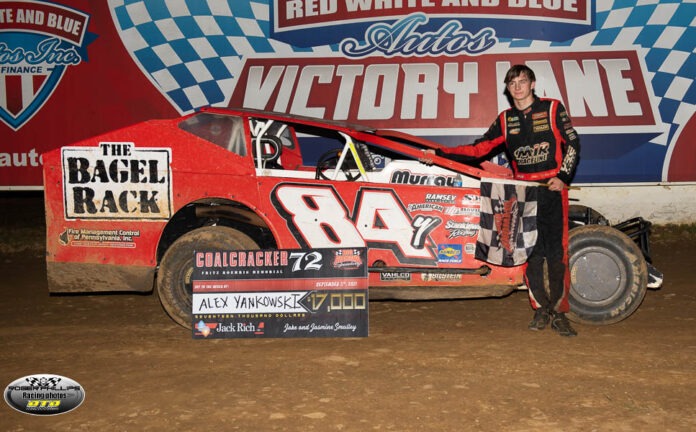 MINERSVILLE, PA – In only his third season racing a modified, teenager Alex Yankowski went out and dominated the Fritz Roehrig Memorial, Jack Rich Inc. Coalcracker 72 leading all but three laps against some of the toughest modified drivers in the northeast. In the companion Coalcracker Savage 61 Crate Sportsman 30 lap main event, it was invader Sammy Martz Jr leading all 30 laps to capture his first ever win at the speedway. Andrew Fayash capped his amazing season off with another victory in the Red White and Blues Auto Roadrunners division.

The 41st running of the Coalcracker 72 got underway with Alex Yankowski and Matt Stangle leading the twenty-five car field to the green flag with Stangle getting the advantage to lead Yankowski into turn one. Stangle was looking strong but on lap three disaster struck for the Neshanic Station, NJ driver as the No. 6 slowed quickly bringing out the first yellow of the race. Back to green and Yankowski lives up to his name “Kid Rocket” as he blasts away from the field to open a big lead over now second-place Duane Howard.

On lap 15 Yankowski had caught the tail end of the pack, starting to put cars a lap down. While Yankowski was slowly navigating his way through, Howard and third place running Jeff Strunk started to close in on the leader. A yellow on lap 23 for Billy Pauch Jr who spun on the backstretch was just what Yankowski needed so it would give him open track once again. The restart was called off when a strong running Frank Cozze backed it into the wall in turn three before a lap could be scored. When the race restarted it was Yankowski again putting some distance between himself and now second place running Dominick Buffalino who had worked his way past Howard on the restart. The last caution of race came on lap 36, exactly halfway when Craig Von Dohren slowed coming out of turn four to head to the pits.

The halfway mark of the race saw the top five as Yankowski, Buffalino, Howard, Strunk and Nick Rochinski. When we went back to green flag racing, Yankowski was gone as he left everyone behind in his wake. While Yankowski was way out front, the racing for the remaining top five spots was intense with Buffalino, Howard, Strunk, Timmy Buckwalter, Rochinski, Max McLaughlin and Anthony Perrego all the way from 22nd. Howard who had faded back to fourth after being passed by Strunk started to come to life again with around ten laps go as he worked his way past Strunk and quickly caught up to Buffalino starting to pressure the driver of the No. 126 for second. All the while, Yankowski was still adding to his big lead as the laps started to wind down. When starter Jeff Merkel threw the double checkers, it was Yankowski by almost a half a track taking the big win and the $17,000 first place money with Buffalino holding off Howard for second. Strunk ended up fourth with Perrego finishing a strong fifth. Finishing sixth through tenth were Rochinski, Buckwalter, Von Dohren, McLaughlin and Mike Gular.

“The past couple of night we were talking about how much this weekend seems to hate me,” cited an overwhelmed Yankowski after winning the biggest race of his career. “I am just so happy; we have worked really hard and were struggling there and we picked it back up and got it going again. I just don’t know what to say. This is biggest race they have here and to win it, I just can’t thank my guys enough. There are a lot of great competitors out the, a lot of them were my idols growing up and I have a great team and I don’t know what I would do without them. I am sure poppa Steve (Alex’s father Steve Yankowski) will be happy with the money tonight and I am just so pumped up.”

Unlike the modified race, the Savage 61 Crate 602 Sportsman race saw an invader come in and steal the money away from the track regulars as Sammy Martz Jr led all 30 laps in dominating fashion to take the Crate Sportsman Coalcracker 30. Martz shot out from his pole position to take the lead but before a lap could be put in the books the yellow was out for Bobby Kupp spinning in turn three and as the field was slowing down, Logan Watt and Dakota Kohler also came together in turn one. Second try at a start was the same result as Joel Smith spun in turn one and yellow was out again. Third time wasn’t a charm as Hunter Iatelese got into the back of leader Sammy Martz Jr causing Martz Jr to get sideways as the field stacked up behind them resulting in another yellow.

As a result of the yellows to get the race started, officials made the call to go single file on the ensuing restart. That proved to be the right call as the race had one lap scored before Beau Drobot stopped in turn three as the yellow appeared once again. Back to racing and Martz Jr is back out front as he starts to put some distance between himself and the rest of the field. While Martz Jr was on cruise control the action was hot and heavy behind him with as many as six cars battled for spots inside the top five. Friday night’s winner Doug Smith was on the move as he moved into third spot just past the halfway mark. With ten laps to go Tyler Peet was on the move as he moved past Smith to takeaway third and with five to go gets past Ray Woodhall to move into second but without a yellow there was no way Martz Jr was going to be caught as his lead was now up to a half a track. Martz Jr led all 30 laps to take the big win and the $1,600 first place prize with Peet coming in second, Woodall, Doug Smith & Ryan Conrad

“You have no idea how this feels,” said a champagne-soaked Martz Jr courtesy of his sister Angelica while talking to co-announcer Barry Angstadt in victory lane. “We have led so many laps here but just couldn’t get the laps done. One time we lost it on the last lap, another time we lost it with ten to go but to finally lead all of them and win this race is just amazing. I have to thank Hannah Korrman for picking me the pole tonight and all my crew for putting this car in victory lane tonight because it was hooked up. I want to give a special thanks to my mom back home, love her.”

The 20-lap Red White and Blue Autos Roadrunner feature race started off with Joe Bassininsky leading the first three laps until 2021 points Andrew Fayash III took over the top spot-on lap three. Fayash started to drive away from the rest of the field only to be slowed down by multiple yellow flags throughout the race. The last restart came on lap 17 with Fayash continuing to lead but he now had to contend with No. 992 of Terry Kramer who was able to stay with the leader until the last lap when Fayash once again started to pull away. Fayash III went on to win his seventh race of the season over Kramer, Dave Schultz, Bassininsky and Matt Ney.