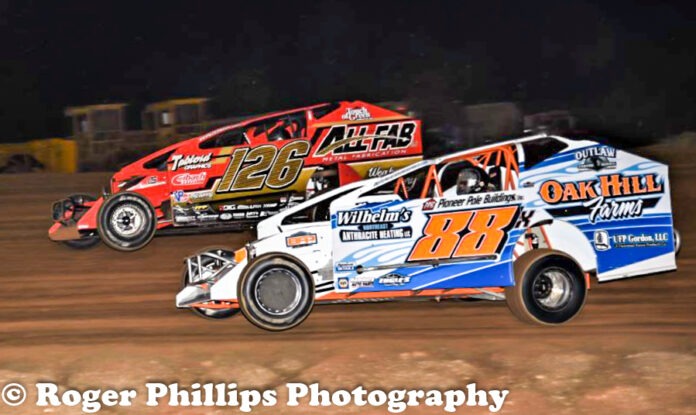 MINERSVILLE, PA – This year’s schedule for the Big Diamond Speedway was released later than we would have liked but believe me it was worth waiting for. This season will be the 50th season of competition at the Schuylkill County dirt oval and track owners and promoters Jake & Jasmine Smulley have put together a spectacular schedule that will give the fans plenty to watch and enjoy in 2022.

The season will get underway with the Minersville Racecar Parade of Power & Car show taking place on Saturday March 26 (Rain date Sun 3/27) to celebrate the 50th Anniversary of the Big Diamond Speedway. Next on the calendar is a test & tune session to take place on Sunday April 3rd which is open to any car with a roll cage.

As always, the mighty 358 modifieds will be the headline division in 2022. This season the modifieds will bring their exciting brand of racing to the track every Friday from opening day on April 8th until the season ending points finale on August 26th. Sandwiched in between will be a plethora of high paying races starting on opening night with a $4,000 to win feature. The following Friday, April 15th will be the annual Money in the Mountains race paying a whopping $12,000 to the winner. Friday May 15th will be the first of two races for Big Diamond as part of the Modified PA Tri-Track series which will pay $3,500 to the race winner. The Tri-Track series returns on Friday June 3rd with another $3,500 to win feature event.

The always popular Topless 30 returns on Friday, June 10th with a $4,000 to win race. Friday July 1st will be part of Georgie Stevenson night featuring the fan favorite Twin 20’s with each 20-lap feature paying $2,000 to the winner. Tuesday night July 12th will be the return of the big block modifieds to Big Diamond as part of the Super DIRTcar Series with the Anthracite Assault paying $7,500 to win the 75-lap feature event. Friday August 5th, the modifieds will run the Dave Kamp Memorial race with the modifieds racing for a $4,000 to win top prize. Friday August 19th will the Prelude to the Coalcracker race paying a cool $10,000 to the winner of the 50-lap feature as the modifieds look to tune their cars in for the top paying race of the season the annual Jack Rich Inc. Coalcracker 72 with the top prize of $17,000. It will be a season to remember for the modifieds.

The Sportsman division will find the Crate 602’s taking center stage this year with the demise of the Open Sportsman division. The Crate 602’s have shown growth ever since they were introduced at Big Diamond two years ago and have arguably been the most competitive class with many different winners. This season will find the Crate 602’s weekly with plenty of scheduled extra money races on the schedule. Those dates include the season opener paying $1,000 to the winner, Friday April 15th $1,000 to win. Tuesday June 7th will find the Crates racing for $1,500 to win. Then on Topless night June 10th, they will race for $1,000 to win followed up on the next Friday as they race the Fayash Memorial which will have a top prize of $1,157. The Crates will also race for $1,000 on the following dates, Friday July 1st, Tuesday July 12th, Friday August 5th, Friday August 19th. The season ending race will be on Sunday September 4th paying $1,500 as part of Coalcracker weekend.

Don’t fret if you are a Sprint car fan, this season will find the winged and non-winged sprints visiting Big Diamond Speedway on multiple nights. Starting with the mighty winged 410’s, this division returned to Big Diamond last and have been booked for two big nights in 2022. The first of two shows will take place on Tuesday June 7th as they race for a $5,000 to win first-place prize. The second of the two shows will take place on Friday August 12th with another $5,000 to pay race. The popular URC Sprint cars will bring their traveling show to Big Diamond on Friday May 20th and Friday June 24th. The USAC East Coast Wingless sprints will be part of the show on Friday May 27th for their one and only appearance of 2022. The very popular MASS Sprint series will make two appearances this season with races on Friday May 13th and Friday September 2nd.

After suffering a rainout in 2021, the ULMS Late Models will once again be on the schedule as the traveling show will be in town on Friday May 6th with a $3,500 to win feature race. The Limited Late Models have two dates scheduled for 2022, Friday July 29th and Friday August 26th with each race paying $1,000 to win.

There will be a spectacular fireworks show on Friday, July 1st as part of the Georgie Stevenson Memorial night.