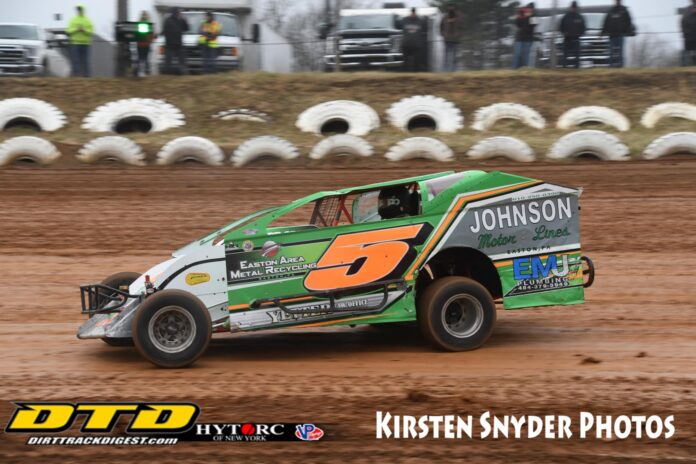 MINERSVILLE, PA – Friday, April 8th will see a new season of racing get underway at the Big Diamond Speedway as the track embarks on their 50th year of competition. Opening night will feature the Insigner Performance Modifieds racing 25 laps for a first-place prize of $4,000. The USS Achey Crate 602 Sportsman will go 20 laps for $1,000. Rounding out the racing card on opening night will be the Red White and Blue Autos Roadrunners with $400 going to the winner of their main event.

Big Diamond first opened back in 1972 on August 27th with the Sportsman being the only division racing. Drick Hendricks won that first ever feature event becoming the first driver to stand in victory lane at the dirt oval in God’s country. 1973 saw the Late Models join the Sportsman as the weekly divisions until the Small Block modifieds took over as the headline division in 1977 with Aaron Brommer winning the first small block modified feature event on opening night.

The Insigner Performance Modified division will once again be loaded with talent in 2022 led by last years point champion Timmy Buckwalter. Buckwalter will be back this season to defend his title against some stiff competion. The PA big three of Craig Von Dohren, Jeff Strunk and Duane Howard will be back and looking to add to their impressive resumes at Big Diamond. Between the trio of Von Dohren, Howard and Strunk they have accumulated a total of 19 track titles and 234 small block modified wins. Other modified drivers expected to appear weekly and battle for wins and titles include former track champion Rick Laubach, Brett Kressley, Mike Lisowski, Ryan Krachun, Nick Rochinski, Louden Reimert, Kevin Beach Jr, Scott Albert, Corey Renninger, Dan Hineline and a host of others expected to call Big Diamond Speedway their Friday night home. Others expected to be in the field for Friday night’s opener include former track champions Mike Gular, Ryan Godown and Billy Pauch Jr along with former Coalcracker 72 winner Ryan Watt who will be driving the Shawn Fitzpatrick owned T102 this season at Big Diamond when his schedule permits.

The USS Achey Crate 602 Sportsman division has turned out to be probably the most competitive division at Big Diamond with very few repeat winners in the division over the past two years and this season should be no exception. Steve Lyle will return to defend his 2021 title. The competition will be fierce for Lyle to repeat as the likes of drivers Logan Watt, Kyle Kania, Danny Buccafusca and a plethora of others will be looking to take the championship away. Former open sportsman driver Brendan Edgar who has visited victory lane at Big Diamond on many occasions in that division will be racing in the Crate 602 division this season looking to continue his winning ways.

The always exciting and competitive Red White and Blue Autos Roadrunner division will be back bigger and better in 2022. Last year it was the Andrew Fayash III and Alex Schoffstall show as those drivers won the bulk of the races with Fayash III taking home the king of the roadrunners title. Expect both of these drivers to be back at it once again this season with many others trying to get into the mix for wins and the title.

All gates will open this Friday at 5:00 pm