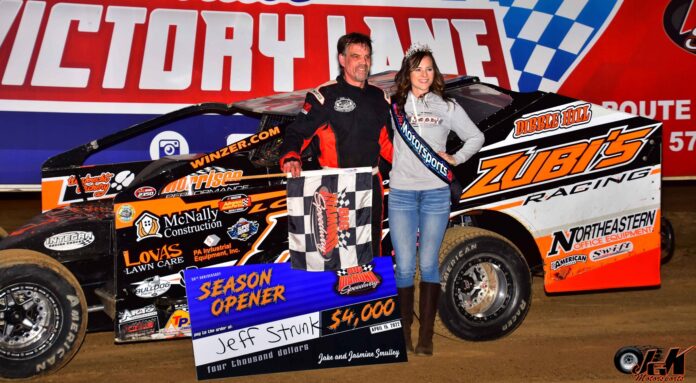 By virtue of the draw, Alex Yankowski driving the Stankiewicz No. 2 and Jeff Strunk aboard the Zubi’s Racing No. 88Z brought the 24 car Insigner Performance Modified field down to starter Jeff Merkel’s green flag. Yankowski immediately jumped out to the lead from his pole starting spot. Lap two saw the first yellow displayed for Eddie Strada who spun between turns three and four. Back to green with Yankowski still in front but before the lap could be completed, Frank Cozze brought the yellow back out as he went off the backstretch to a stop. Back to green but not for long as Billy Pauch Jr stopped in turn two with a broken front end requiring a tow truck.

When racing finally resumed, Yankowski still led the way, but Strunk was right there. Lap nine saw Strunk starting to work the inside of leader Yankowski to take away the lead. Lap 10 saw the last yellow flag of the race being displayed for a slowing Ryan Krachun. On the restart it was Yankowksi once again out front, but a determined Strunk was pressuring the young driver to take over the top spot.

Lap 15 proved to be the key lap for Strunk as he worked the inside and was able to get by Yankowski and take over the lead with a hard charging Louden Reimert following suit also getting by Yankowski. Reimert moved in on Strunk but as the race wore on Strunk was able to put a safe distance between himself and the second-place runner. Strunk streaked across the finish to take the $4,000 first place prize. With his opening night win, Strunk now ties Duane Howard with the most opening night wins at six. Following Strunk across the line were Louden Reimert, Alex Yankowski, Duane Howard and Mike Gular.

“I think he (Alex Yankowski) was starting to slow down a little bit and I was getting better,” said a happy Jeff Strunk from victory lane. “Alex is like a little brother to me, and I wasn’t going to rough him up or do anything dumb. It was just one of them deals. He was kind of searching there towards the end and I didn’t want to show myself too soon and I just wanted to get a good run at him. He knows that I run good here on the bottom. We missed a little on the setup, but we were pretty dam good and it’s great to get the year off with a win here and a second at Grandview. I can’t say enough about this team and Dave Zubikowski and everybody that supports us because without that we wouldn’t be here. Thanks to the fans for coming out, we appreciate it and like me or not I am glad you are all here and cheering for somebody. Hats off to Jake for getting the track ready for us and we are glad to be here.”

The USS Achey Crate 602 Sportsman main event featured a battle of youngsters as Talan Carter and Doug Smith Jr went at it for most of the 20-lap main event. Smith Jr brought the field to the green flag. Smith would hold the lead through a series of caution flags with third place starting Carter right behind. Carter stayed right on Smith’s bumper. The two leaders ran bumper to bumper as they completed lap nine with Carter able to get alongside the leader Smith on lap ten. Carter was able to take over the top spot as they crossed the line to complete lap eleven. Meanwhile Logan Watt who was shuffled back in the early stages of the race was flying through the field and was catching the top two when the yellow came out on lap 13.

Carter was off and running as the race resumed with Smith trying to hold off Watt and fast closing Kyle Kania. Carter went on to take the checkered flag for his first career win over Smith, Kania who got by Watt with two to go for third. Danny Buccafusca rounded out the top five.

In the Red White and Blue Autos Roadrunner division it was a repeat of last season with Andrew Fayash III wrestling the lead away from Mike Reichert and Jim Kost to take the win. Following Fayash across the line were Reichert, Chuck Fayash, Terry Kramer and Glenn Rowan

Up next on the schedule at Big Diamond Speedway on Friday April 22 is the annual Fritz Roehrig Memorial Money in the Mountains race for the Insigner Performance Modifieds paying a cool $12,000 to the winner of the 50-lap feature. The USS Achey Crate 602 Sportsman will also race for some extra cash with $1,000 to the winner.