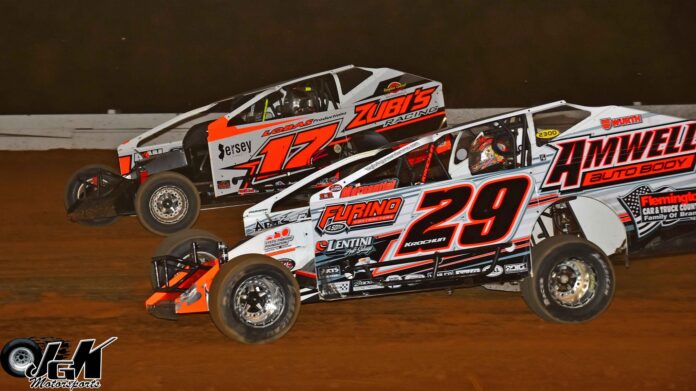 MINERSVILLE, PA – Ryan Krachun has come so close to winning previously at Big Diamond Speedway. Leading races and losing them in the late stages seemed to way it had gone for Krachun. Not on this night, not only did Krachun lead all 35 laps, but he held his line on the bottom and was able to hold off first Brett Kressley and then Alex Yankowski to take his biggest win of his career along with a $12,000 payday. For Krachun it was his first ever win at Big Diamond.

Doug Manmiller and Richie Pratt Jr led the 24-car Insigner Performance Modified field to start the Money in the Mountains 35 lap race. While those battled at the drop of the green, Krachun saw an opening going into turn one on the bottom and charged into the top spot. The leaders race to the line to complete lap one when the yellow was put out for a stopped Jared Umbenhauer in turn four. Krachun led the field back to racing and continued to lead the way as Pratt tried his best to get by but to no avail as Krachun was able to scoot back to the lead coming out of turn two.

The red flag was displayed a few laps later as Nate Brinker, Max McLaughlin and Billy Pauch Jr were all involved in a wreck on the frontstretch with McLaughlin’s No. 357 ending up on top of Brinker’s No. 14. Pauch Jr was able to drive away to the pits and return to the race. That would turn out to be the last stoppage of the race with Krachun maintaining his lead. Brett Kressley had worked his way up to second and as Krachun caught the back of the pack Kressley was able to pull up on the leader’s bumper.

Kressley hounded Krachun from behind, but the young Krachun held his line down low forcing Kressley to try and make the top work. Meanwhile Alex Yankowski had made his way to third and was tracking down the leaders at a fast pace. Yankowski saw his opening to get by Kressley when Kressley tried the high side through turns three and four and made it work to takeover the second spot with only a couple of laps remaining. Last year’s Money in the Mountains winner Yankowski gave it all he could to make it two in a row, but Krachun was not going to be denied on this night and streaked under starter Jeff Merkel’s double checkered flags to take the big win. Yankowski finished second with Kressley, Mike Gular and Craig Von Dohren the top five.

“We have been trying for years and coming up here for years,” said an elated Krachun in victory lane with track announcer Dino Oberto. “We have built a great fan base here, last year we had a fast car couldn’t get that win finishing second more than I would like. I am almost at a loss for words, we have been trying to get to Big Diamond victory lane for a long time. It was getting hard to pass so I knew I had to stay on the bottom and make them work for it. I knew I would be okay if I didn’t make a mistake, they would have a hard time going around me and I think I was right. Thank you to the fans, it makes it special when you see a bunch of your t-shirts and sweatshirts in the crowd.”

Brandon Edgar’s 2022 season at Big Diamond did not get off to a great start after being involved in a wreck on opening night resulting in an DNF. Edgar came back with a vengeance this week as he dominated the USS Achey Crate 602 Sportsman 20-lap feature to take the win.

Outside pole sitter Jonathan Swift would take the lead at the start after pole position starter Tajae Adams brings out the first yellow with a flat tire. Swift would continue to lead the way but on lap three fourth place starter Edgar was all over the leader and takes away the top spot. Once in front Edgar would never look back and dominate the race for the win. Tyler Peet, Matt Yoder, Ryan Conrad and Steve Lyle completed the top five.

In the Red White and Blue Autos Roadrunners feature race Jim Kost would be the early leader. Opening night winner Andrew Fayash III would be quick to the front and get by Kost to take the lead on lap three with Alex Schoffstall following Fayash through to take second. Fayash and Schoffstall would battle for the lead until Schoffstall took over for good on lap eight. Once in front it was all Schoffstall as would take the win over Fayash, Mike Reichert, Jim Kost and Chuck Fayash.