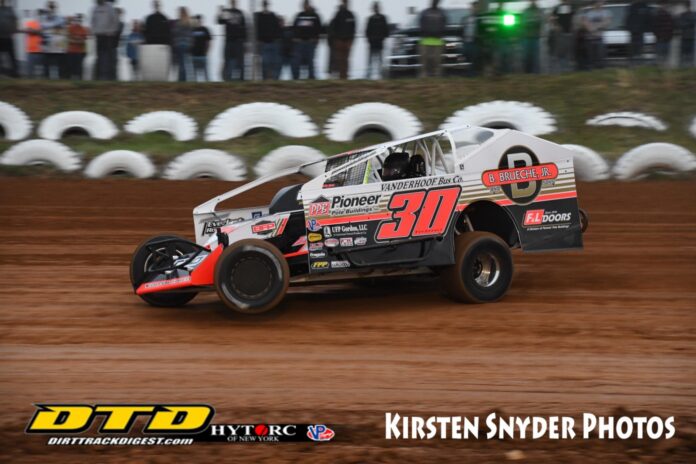 Due to a blown motor on opening night in the Dave Dissinger owned No. 88x, Craig Von Dohren returned to Big Diamond for the second week in a row driving the Bueche owned No. 30. With not making the feature on opening night, Von Dohren knew he would be starting towards the front and was prepared to take full advantage.

Cliff Quin and Von Dohren brought the field to the start with Quinn grabbing the lead at the drop of the green. After one lap was completed, the yellow was displayed for the spinning car of Joel Smith on the backstretch. On the restart Quinn led the way but the yellow was out once again for the spinning car of Billy Lasko. On the following restart, Von Dohren was able keep pace with Quinn down the front and edged in front of Quinn going into turn one. Once in front, Von Dohren started to pull away from the rest of the field. While Von Dohren was setting a torrid pace out front, the battle behind raged on as teams were vying for top five spots. Eddie Strada who started ninth and Brett Kressley from eighth battled hard for the runnerup spot.

Von Dohren was not going to be denied on this night as he opened up close to a half a track lead over the second place running Strada. Von Dohren would streak under starter Jeff Merkel’s checkered flag to win his track leading 101st career win. Strada would finish second over Kressley with a hard charging Duane Howard all the way from 14th to finish fourth. Ryan Watt rounded out the top five.

“We got a hole shot there, we were supposed to win this thing tonight starting up front,” said a happy Von Dohren after the race. “We’ll take it, we had a rough night two weeks ago and this is the benefit of that bad night. I had no idea (how far he was out front), I knew Ryan (Watt) was back there and you just don’t know who’s coming. Someone might find a different groove, Brett (Kressley), Jeff (Strunk) and Duane (Howard) are all back there so you just go as fast as you can and try to get there first.”

The USS Achey Crate 602 Sportsman feature saw yet another first-time winner in victory lane with James Costlow winning the 20-lap main event. Jonathan Swift and Costlow would lead the 24-car field to the green flag, but the race came to a screeching halt with multiple cars tangling right in front of the starters stand including last weeks winner Brendan Edgar. Back to racing and Swift leads but the caution is out again after one lap with three cars getting together in turn one. Swift continues to lead the way on the restart with Costlow and Craig Whitmoyer on his bumper. After a couple laps of racing, the red flag was put out for a hard crash on the backstretch involving Kyle Kania and Doug Smith with both cars going up and over. Thankfully both drivers were okay but the same could not be said for the racecars.

Once racing resumed, Costlow was able to beat Swift to the punch and take the lead with Whitmoyer to second. Lap five and the yellow was out again with due to a multi car tangle in turn four. At this point the race director made the call to go to a single file restart due to the multiple stoppages. Costlow continued to lead the way with Whitmoyer and Swift waging a hard battle for second. Whitmoyer and Swift made contact with Whitmoyer coming out on the short end falling back multiple spots. Costlow would go on to take his career first win over a hard charging Whitmoyer who fought his way back to second. Swift would end up in third with Kevin Olenick and Matt Yoder the top five.

“This feels great, I knew we were going to win at some point this season,” said an estatic Costlow in victory land for the first time ever. “I sure didn’t expect it to be so early on. Johnathan put up a tough front so big props to him, it was really hard to get around him. The car just drove well, I did make some mistakes that got in my head, but I ended up coming out on top and that is all that matters. I did have a rookie win last year at Thunder Mountain, but this is my first big boy win, and it feels great.”

In what was the easily the most exciting race of the night, Andrew Fayash III won his second Red White and Blue Autos Roadrunner feature of the season with a last lap, last corner pass of Mike Reichert to steal the win. Jim Kost took the lead at the drop of the green with Mike Reichert taking over after one lap. Lap nine finds the seventh-place starter Fayash III battling with Reichert for the top spot. Last week’s winner Alex Schoffstall decides to join the fun upfront as he throws his helmet into the battle. Fayash III takes the lead, but Reichert takes it right back as the three leaders battle hard and clean for the top spot. Disaster almost strikes for the leaders when a lapped car spins out directly in front of them in between turns three and four, but they all manage to avoid the spinning car. Back to racing and Reichert leads the way and opened up a 2-3 car advantage over Fayash III. Fayash III has a fantastic last lap and pulls right up on Reicher through turns one and two. Fayash III enters turn three in the middle groove and then ducks under Reichert coming out of turn four to take his second win of the season over Reichert and Schoffstall.

The XCEL 600 modifieds made their season debut at Big Diamond with Korey Inglin taking the win. Ritchie Hitzler took the lead at start with Tyler Bartlik quickly moving up to second after starting sixth. The early half of the race was plagued with yellows. Bartlik would take the lead on lap five with Inglin also getting by Hitzler for second. Inglin would take the race lead on a lap ten restart and go on to take the win over Hitzler, Geoffrey Sutton, Tyler Bartik and Kenny Harris III