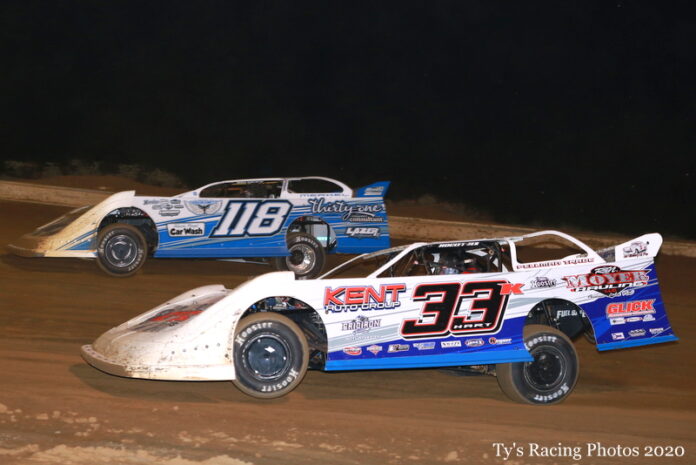 The Zimmers Service Center ULMS Super Late Models will be in the house this Friday night May 6th at The Big Diamond Speedway. The traveling Super Late Model series was set to make their Big Diamond debut in 2021 but unfortunately Mother Nature had other ideas.

Also, on the racing card for this Friday night will be the Insigner Performance Modifieds, the USS Achey Crate 602 Sportsman and the Red White and Blue Autos Roadrunners.

The ULMS Super Late Models were a very popular and anticipated addition to the Big Diamond schedule in 2021 and the debut succumbing to rain was a big disappointment for the series, the track and especially the fans. The ULMS series always puts on a great show and the banks of Big Diamond Speedway should add to that excitement.

The 30-lap ULMS main event will pay $3,500 to the winner. Greg Satterlee is the current points leader followed closely by the popular Rick Eckert. Both drivers have visited the winners circle in 2022 and will lead the traveling series at Big Diamond on Friday night. Other series regulars expected to be in attendance are Tyler Emory, Jared Miley (2015 series champion), rookie points leader Colton Flinner, Danny Snyder, Dan Stone, the Yoders Dylan and Andrew, Andy Haus and the Bernheisel father and son team of Jim and Bryan.

Last week in the Insigner Performance Modifieds it was Craig Von Dohren standing in victory lane for the 101st time in his Big Diamond career. This week the modifeds will be back in action running a 25-lap main event. Louden Reimert is the current points leader by a small margin over Jeff Strunk and Duane Howard.

With some of the top runners in the USS Achey experiencing some misfortune last Friday night, the chase for the title has taken a turn. The points leader going into last week Talon Carter failed to qualify after having issues, now leading the way in the chase for the 2022 championship is Matt Yoder with Brandon Edgar trailing by only ten points. Last Friday’s winner James Costlow will be back looking to double up on the season. The Crates will once again go 20 laps in their main event.

Andrew Fayash III, Mike Reichert and Alex Schoffstall put on the show of year so far in the Red White and Blue Roadrunners division with all three battling for the win with Fayash III pulling off a last lap, last corner pass to steal the win away from Reichert. All three drivers will be back again this Friday night to show the fans their exciting brand of racing.

General admission on Friday night will be $28, Senior admission is $25, Kids under 16 are free. Active military are admitted free with a valid ID.