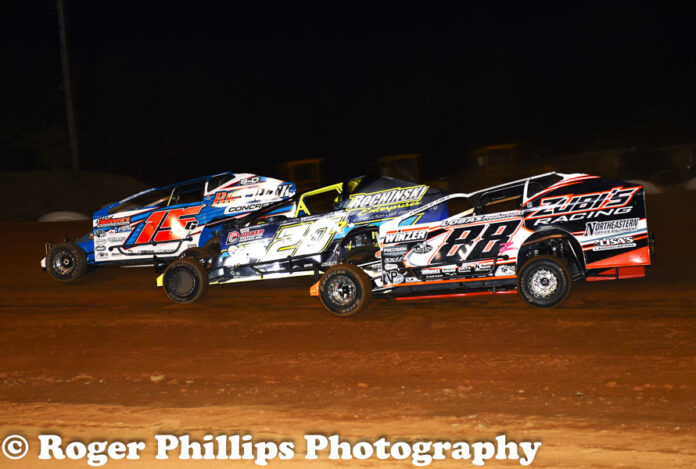 MINERSVILLE, PA – With the original debut of the PA Spec 358 Tri-Track Series previously rained out at BAPS Speedway, the first race on the series now shifts to The Big Diamond Speedway on Friday, May 13th.

The PA Spec 358 Tri-Track Series is a joint venture between BAPS Speedway, Grandview Speedway (through The Thunder on the Hill promotions) and Big Diamond Speedway under the direction of Kolten Gouse, Jake and Jasmine Smulley and Bob Miller with a goal to provide a unified series for the many PA/NJ 358 spec small blocks in the area. The series will pay a point fund at the end of the season with the hopes that the series will prosper and grow into a yearly series.

This Friday night, the series will hold its first race at the Big Diamond Speedway concluding with a 30-lap feature paying $3,500 to the winner. Currently Louden Reimert leads the points standing at the Schuylkill County dirt oval with savvy veterans Jeff Strunk and Duane Howard lurking in second and third. Along with the normal weekly competitors at Big Diamond Speedway, we can expect some outsiders to invade come Friday night looking to get a good start on the series. After missing the previous week, 2021 track champion is scheduled to return on Friday night. So far in 2022, there have been three features run with Jeff Strunk, Ryan Krachun and Craig Von Dohren taking turns standing in victory lane.

After a week off due to the rain, the USS Achey Crate 602 Sportsman modifieds will be back with many drivers looking to rebound after some bad misfortunes two weeks ago. Former points leader Talan Carter and Danny Buccafusca are just two of the drivers who will be looking to get back on track this Friday. Currently Matt Yoder is leading the way for the 2022 track title followed by Brandon Edgar and Logan Watt.

Two weeks ago, in the Red White and Blue Roadrunner feature event, it was Andrew Fayash III, Mike Reichert and Alex Schoffstall putting on a fantastic battle for win that had the crowd standing and cheering. Fayash III ended up the victor on that night but Reichert and Shoffstall hope to have something to say about that this Friday.

The Mid Atlantic Super Sprints (MASS) 305 sprint cars sponsored by Delaware Auto will also be in action on Friday night displaying their exciting brand of racing. The MASS sprint cars have completed five races this season with five different drivers winning. Current points leader Kevin Nagy has registered one win so far this year and has only finished out of the top ten one time. Buddy Schweibinz and Larry McVay are next in line in the race for the 2022 title.

General admission on Friday night will be $25, Senior admission is $23, Kids under 16 are free. Active military are admitted free with a valid ID.