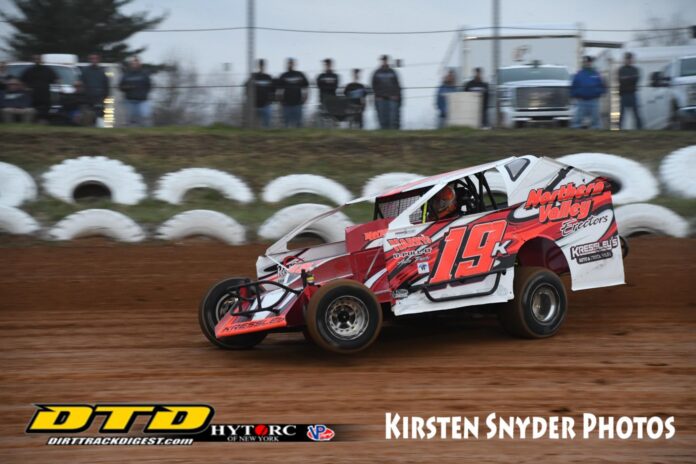 MINERSVILLE, PA – After a month-long hiatus due to the weather. The Insigner Performance Modifieds made their return to Big Diamond Speedway as part of the PA Tr-Track Spec 358 series. This was race number two on the series and after the checkered flag flew it was Brett “The Threat” Kressley standing in victory lane winning for the first time this season at Big Diamond. Brandon Edgar held off a stubborn Danny Buccafusca for the win in the USS Achey Crate 602 Sportsman while Mike Reichert was victorious in the Red White and Blue Roadrunners. The Central PA Roadrunner win was taken by Travis McClelland.

Mike Lisowski and Timmy Buckwalter led the 24-car starting field to the green flag in the 30-lap modified feature with Lisowski getting the upper hand on Buckwalter to lead lap one. Third place starting Kressley wasted little time throwing himself into the mix as he vaulted by Buckwalter and into second. Cautions on laps two and three slowed the pace of the race but as we returned to racing it was still Lisowski leading the way with Kressley applying pressure as the two raced for the lead. A lap 15 caution proved to be what Kressley needed as he was able to wrestle the lead away from Lisowski on the restart to take over the top spot.

One lap later and the yellow was out again but, on the restart, Kressley was able to maintain his lead. The last half of the race was run caution free, and Kressley was able to open up a safe lead with Lisowski now having to deal with Buckwalter who was all over him for second. While those two battled it was Kressley who streaked under starter Jeff Merkel’s checkered flag to take his sixth career small block modified win at Big Diamond. Lisowski was able to hold back the advances of Buckwalter to finish second with Buckwalter in third. A strong run for invader Jack Butler who finished fourth with Eddie Strada completing the top five. The win for Kressley was worth $3,500.

“Hat’s off to Mike (Lisowski), he is a hell of a racer, and he has his program turned around this year and is running well,” said a happy Kressley in victory lane after his big win. “I was able to get a good run on him on that restart and that was best thing that could’ve happened there. Then I realized that the middle groove was good once I got around him and then I was able to ride it to the top the last couple of laps. Hats off to my crew, the car was really good tonight. Thank you to Ron Seltman for getting me dialed in. Thank you to Big Diamond to putting up this money and to the fans in the stands that make it go around.”

The 20-lap USS Achey Crate 602 Sportsman feature saw Brendan Edgar be the first driver to rack up multiple wins in 2022. Brandon Oleski would take the lead at the drop of the green from his pole starting spot with Kevin Olenick coming from fourth to second. Lap five proved to be disastrous for the leader Oleski as he breaks in front of the field and stops. Second place Olenick has nowhere to go and runs into the leader and stops. Danny Buccafusca was the benefactor and was now the leader. Ninth-place starter Edgar had moved up through field and was now in the second spot and using the top to pressure Buccafusca for the lead. Edgar was finally able to work the high side to take the lead, but Buccafusca would not go away and stayed right with Edgar but didn’t have the extra speed he needed to take back the lead. Edgar takes the win over Buccafusca with Craig Whitmoyer, Matt Yoder and Steve Lyle the top five.

In the Red White and Blue Autos Roadrunner feature race it was Mike Reichert taking the win. Reichert took the lead early with the No. 77 of Alex Schoffstall all over him for the lead. Reichert worked the top side of the track with Schoffstall trying the bottom side. During the mid-race portion, Schoffstall hits the wall and breaks leaving Reichert with the lead. Jim Kost puts on a late race charge for the win, but Reichert holds him off for the win.

In a caution filled race, it was Travis McClelland holding off a late race charge from Robert Stough for the win. Seth Kearchner, Tanner Jones and Scott Houdeshell completed the top five.