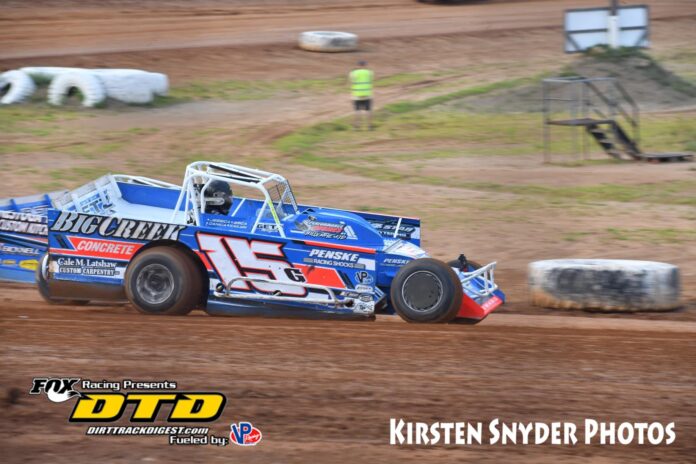 MINERSVILLE, PA – For the second year in a row, Duane Howard and the Butch Getz Motorsports No. 15G team won the annual Insigner Performance modified “Topless” race at Big Diamond Speedway as Howard completely dominated the race once he took the lead on lap 14. Danny Buccafusca backed up his strong second place finish from last week to win the USS Achey Crate 602 Sportsman feature with Mike Reichert winning the Red White and Blue Autos Roadrunner main event and Korey Inglin who was victorious in the Xcel 600’s.

The Insigner Performance modifieds took off their window panels and roofs for this once a year a year race which has seemed to become a crowd favorite and when the checkered flag flew it was Duane Howard standing in victory lane and taking home the $4,000 first place prize. Howard, who had gone winless since last year’s topless race left no doubt who was in charge on this night winning going away.

Outside polesitter Ryan Krachun would take the lead at the start until the caution flag was put out after one lap when Kevin Beach Jr and Ryan Watt tangled in turn two. Watt pitted and returned, and Beach was put to the rear for his involvement in the tangle. During this yellow, the leader Krachun exited the race with problems handing the lead over to Ken Eckert Jr. Consecutive yellows on laps three and four kept the racing in check but once we got back to some green flag racing Mike Lisowski had taken over the lead.

Last week’s winner Brett Kressley would take over at this point as Howard was on the move quickly getting by Nick Rochinski and Craig Von Dohren to move into second by lap 11. Howard wasted no time in running down the leader Kressley and within a lap was putting the pressure on Kressley for the lead. Howard kept working the inside groove and as the field completed lap 14 was your new leader. The No. 15G was on rails this night and started to open up a lead on the field. Lap 19 saw Kressley slow to a stop with a right rear flat tire putting Big Diamond Speedway’s all-time winner Von Dohren alongside Howard on the restart. Howard was up for the challenge and stayed in front on the restart. Lap 20 saw the yellow out once again for a tangle between Shawn Fitzpatrick and Scott Albert.

The ensuing restart did not faze Howard as he once again pulled ahead of Von Dohren and raced away to a big lead taking the checkered flag to win his first of the season. Von Dohren finished second with Rick Laubach, Nick Rochinski and Eddie Strada completing the top five. Howard took home $4,000 for his big win.

“You know what, I am not sure we are going to put a roof back on this car,” said a happy Howard in victory lane. “It seems like every time we take the top off, we run good. I have to thank the Getz family and the crew; we have been working really hard. We have been passing a lot of race cars here but just didn’t have the position on the racetrack to get it done but tonight I had an awesome race car. The car seems to free up without the extra body on it and it really plays into my hands when I can finesse the car a little bit and we hit it right on the money tonight. I also want thank Dave Reedy from Penske Shocks; he has been putting a lot of effort into making it work for us this year. This car was on rails, and I could rotate the bottom so good and like I said we had an awesome race tonight.”

The 20-lap USS Achey Crate 602 Sportsman feature saw Danny Buccafusca picking up his first win of the season. Buccafusca, who had a strong second-place finish last Friday night was able to get that one extra spot last night to pick up the big $1,000 first-place prize. Polesitter Xavier Sprague would lead lap one, but Buccafusca who started in eighth was on the move early and took over the lead from Sprague on a lap six restart.

While Buccafusca was stretching out his lead, all eyes were on last week’s feature winner and eleventh place starter Brandon Edgar. Edgar was flying around the outside lane of the track passing cars each lap on his way to the front, once Edgar moved into the third spot, he and Logan Watt battled hard for second. Edgar was able to work his way past Watt as the field was coming around for the two to go sign but Buccafusca was too far out in front for Edgar to challenge for the lead as Buccafusca streaked under Jeff Merkel’s checkered flag to take the big win. Edgar finished second with Logan Watt, Mike Schneck and Talan Carter rounding out the top five.

“I love topless night, everyone says it doesn’t mean a thing, but I think it just makes the car free enough to play right into my wheelhouse,” exclaimed an excited Buccafusca in victory lane. “I love racing in this division with everybody out there especially Logan (Watt) and Brendan (Edgar). On top of them being my friends, I really respect them as racers, and I think I can learn a lot from them each and every week. I love getting better every week and challenging myself. I can’t thank everybody on the side of this car enough especially John Gilroy for putting me this car every week of Gilroy Northeast and Ryan Grim for everything he does.”

Mike Reichert doubled down from last week’s win to take the checkered flag in the Red White and Blue Autos Roadrunner feature. TJ Fitzpatrick led early on and after a couple of early race cautions found himself in a battle with Reichert and Alex Schoffstall. Lap seven saw Reichert emerge as the leader with Schoffstall working the outside lane trying to get by Reichert for the top spot. Reicher was able to hold off all of Schoffstall’s challenges to win his second of the season over Schoffstall, Andrew Fayash III, Fitzpatrick and Chuck Fayash.

The Xcell 600 modifieds joined the program on Friday and it was Kory Inglin taking the lead early on and going on to win the feature over Kenny Harris III, Richie Hitzler, Tyler Bartik & Christian Donati