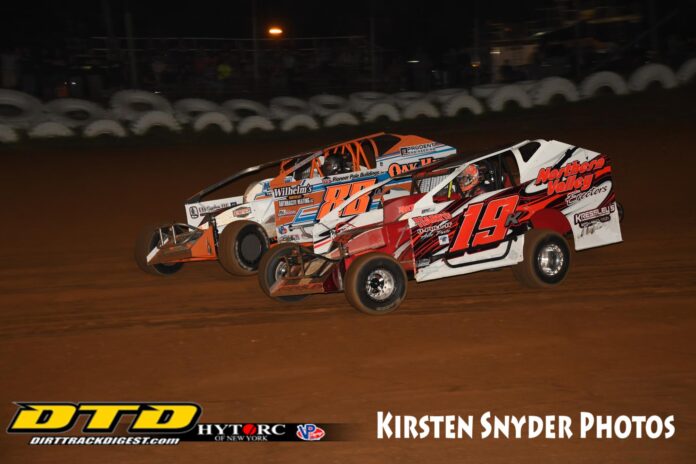 MINERSVILLE, PA-B&H Landscaping Services proudly presents a huge night of racing this Friday July 1st at Big Diamond Speedway. Friday night will serve as the annual Georgie Stevenson Memorial race featuring the mighty Insigner Performance 358 Modifieds headline the night of action as the PA Spec Head Modified Tri-Track Series make the second and final appearance of the season. The night’s action will be punctuated with a fabulous Fireworks show to celebrate our great nation’s birthday!

For those who do not know, Georgie Stevenson was an avid fan of the Big Diamond Speedway along with his family. Georgie and his family supported the speedway religiously each week. Sadly, Georgie was diagnosed with cancer at a young age and while fighting the dreaded disease, the young man worked hard to raise money for cancer research. Georgie’s battle with cancer concluded at the age of twelve when the courageous young man passed away. Georgie loved the sport of dirt racing especially at his home track, the Big Diamond Speedway.

After three races on the series, Timmy Buckwalter leads the way in the points standings by a mere margin of twelve points over Craig Von Dohren with Brett Kressley in third only thirteen points off the lead. Von Dohren has two series wins with Kressley winning the remaining race.

Last Friday night at Big Diamond saw Nick Rochinski win his first ever feature at the speedway over a determined Duane Howard and will look to make it two in a row. With his second-place finish last week, Howard has taken back over the points lead over Louden Reimert in a very tight race for the 2022 track championship. Brett Kressley remains the only driver who has multiple wins this season with two while Von Dohren, Ryan Krachun, Jeff Strunk, Nick Rochinski and Duane Howard have reached victory lane on a single occasion. This week 30 lap feature event will pay a nice $3,500 to the winner.

This week, the Insigner Performance Modifieds will race for show-up points toward the 2022 Big Diamond Speedway championship and will draw for groups at check-in. Modifieds will be put into groups for their heat races. Modifieds will hot lap in their respective groups with lap speeds determining how they will lineup for the heats. There will be no invert, lineups will be fastest to slowest.

The ultra-competitive USS Achey Crate 602 Sportsman will be racing for $1,000 to win this Friday night. Last Friday night, it was young Logan Watt winning for the second time in his short Big Diamond Speedway career. Brandon Edgar continues to lead the points over Danny Buccafusca as these two have established themselves as the drivers to beat in the season long battle for the championship.

The Red White and Blue Autos Roadrunners continue to thrill the fans each week with their exciting brand of door-to-door action. Mike Reichert and Alex Schoffstall put on quite a show last Friday night before Schoffstall was able to pull away in the last couple of laps to take the win. With his second-place finish, Reichert continues to lead the points.

General admission on Friday night will be $25, Kids under 16 are free. Active military are admitted free with a valid ID.