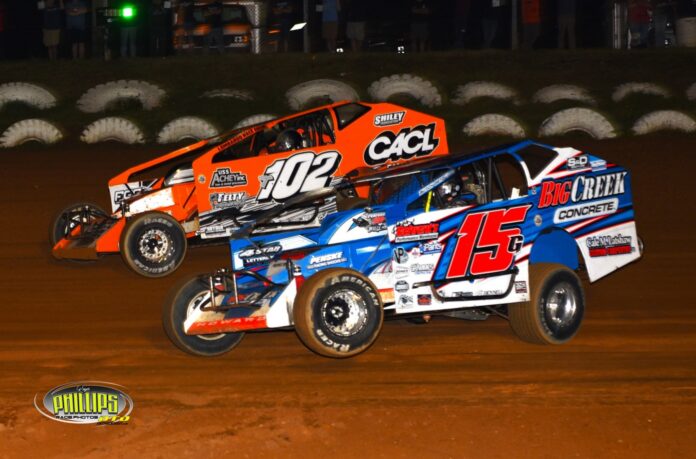 MINERSVILLE, PA – It was an epic night of racing at the Big Diamond Speedway last night. Despite rain all around the area, the track was spared of Mother Nature’s wrath. Jake Smulley and his track crew had the Schuylkill County dirt oval prepared to perfection which produced great racing in every division on Georgie Stevenson Memorial Night sponsored by B&H Landscaping.

The Inisgner Performance modified feature saw the “Diamond Cutter” Duane Howard run down two-time feature winner this season Brett Kressley to win the fourth leg of the PA Tri-Track Spec 358 race in an fight to the finish. Brandon Edgar was the winner of the USS Achey Crate 602 Sportsman race and Jim Kost and Alex Schoffstall both held off challenges to win the twin 15 lap Red White and Blue Roadrunner features.

Invader and former Coalcracker winner Doug Manmiller would lead the Insigner Performance modified field to the green flag with Jack Butler to his outside. Manmiller would lead lap one with Brett Kressley quickly getting by Butler to take over the second spot. Eddie Strada would bring out the first yellow of the feature when he backed his No. 33 into the third turn wall. The restart saw Kressley take overthe top spot and start to walk away from the field. PA Tri-Track Spec series points leader Timmy Buckwalter would bring out the next yellow flag when he slowed on the backstretch and headed to the pits. At this point it was Kressley leading the way over Manmiller, Butler, Louden Reimert, and a hard charging Duane Howard.

When racing resumed it was Kressley leading the way and starting to pull away from second place Manmiller. Meanwhile, Howard was making his presence felt as he worked his way past Reimert and Butler to move into the third spot. The final yellow of the race was displayed on lap nine as top ten runner Mike Gular slowed with a left front flat tire. Kressley continued to lead the way when the race restarted with Howard working his way past Manmiller for second.

As Howard moved to second Kressley held a big lead and starting to catch the tail of the field. As Kressley started to hit the lapped cars Howard started to cut into his lead and Kressley’s car started to show signs of losing the handle of the No. 19K. Howard started to close quickly as Kressley was having troubles getting by the lapped cars. Lap 25 proved to be the game changer as Howard worked his way underneath Kressley coming off of turn four to try and take the lead. The two leaders would come off the corner with Howard leading the way. As they raced down the frontstretch, the lapped car of Cliff Quinn was in front of the leader running the same line as Howard. Not backing off, Howard moved to his right to avoid Quinn and when he did made contact with Kressley’s left front wheel causing Kressley to bounce off the wall. Howard was the new leader at this point and pulled away over the remaining five laps to take the win and the $3,500 winners share. Kressley held on for second with Reimert, Pauch Jr and Strunk the top five.

“The hunger is still there,” said a fired-up Howard in victory lane following his big win. “We have to get other teams rattled and that is the way to rattle them right there. We threw something at this tonight that was a kind of unusual and it didn’t take off in the beginning quite the way I like but man did it come on in the end as long as I didn’t drive the car and get it hanging. It was a good racetrack tonight; you could run the bottom down in one and two and you kind of had to be on the lip in (turns) three and four. The last couple of weeks, it has been pretty good racing here, thanks to Big Diamond Speedway and the Butch Getz team. They give me stellar equipment and they work their butts off and for everyone involved, this is for them.”

After a couple of early yellows, the USS Achey Crate 602 Sportsman feature finally got underway with Brandon Oleski leading the way. Opening night winner Talan Carter was on the move quickly and by lap four was starting to pressure Oleski for the lead as point leaders Danny Buccafusca, Brandon Edgar and Logan Watt were all charging towards the front. A lap five restart saw Carter go to the outside and take the lead away from Oleski with Edgar moving to third. One lap later and Edgar went by Oleski on the outside and into second. One lap later and Watt went by both Buccafusca and Oleski to take the third spot.

Carter still led the way, but Edgar was determined and started to use the outside to move alongside the leader. Coming off of turn four to score lap 13 Edgar edged by Carter to take the lead but Edgar’s lead was short lived as the yellow was out before the lap was scored giving Carter back the lead. Back to green flag racing and Edgar wasted no time going by Carter on the outside to pass Carter and takeover the lead. While Edgar was starting to extend his lead, Watt was now all over Carter for the runner-up spot. Watt made his move by Carter with three laps to go and started to run down Edgar but ran out of time as Edgar won for the third time in 2022. Watt finished second with Carter, Buccafusca and Oleski completing the top five.

Friday night at Big Diamond saw the Red White and Blue Autos Roadrunners run twin 15 lap features with wins going to Jim Kost in feature one and Alex Schoffstall your winner in feature two. The first 15 lap feature saw Kost take the lead on lap one at the drop of the green with TJ Fitzpatrick in second. Points leader Mike Reichert moved through field quickly and on lap eleven slip into second and start to pressure Kost for the lead. Kost held his line and was able to hold Reichert for the remaining four laps to take his first win of the season over Reichert, Joe Bassininsky, Jarod Bassininsky & TJ Fitzpatrick

Feature number two saw Chuck Fayash take the lead on lap one, but the race was quickly halted as TJ Fitzpatrick went hard into the end of the third turn wall causing his car to stand straight up on end. The red flag was quickly displayed and after a few anxious moments word from the scene was the Fitzpatrick was okay with the exception of a sore ankle. Chuck Fayash was dq’d at this point for his role in the crash handing the lead over to Alex Schoffstall. Schoffstall did not have it easy though as Andrew Fayash III had worked his way back to the front after an early race pit stop. A late race yellow bunched up the field and Fayash gave it all he had to get by the leader Schoffstall but to no avail as Schoffstall was your winner over Fayash III, Reichert, Kost and Terry Kramer.