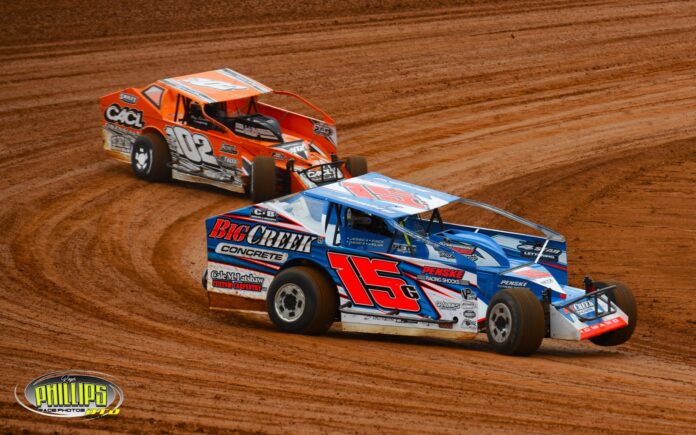 MINERSVILLE, PA – The third time was a charm for the Zimmer’s Service Center ULMS Super Late Model series as they were able to finally make their debut Friday night at Big Diamond after two rainouts. The traveling series brought 19 cars to the track with Greg Satterlee completely dominating the race for the win. The Insigner Performance Modified feature was won by Duane Howard, also in dominating fashion. Logan Watt continued his education in the USS Achey Crate 602 Sportsman feature race holding off a determined Brandon Edgar for the win with Alex Schoffstall taking top honors in the Red White and Blue Roadrunner feature.

The 30-lap Zimmer’s Service Center ULMS Late Model feature got off to an inauspicious start as two cars tangled in turn on before a lap could be completed. A complete restart was in order and when the green flag dropped it was polesitter Greg Satterlee immediately ascending to the top of the leader board. Lap two saw the yellow out again after a spin in turn four. On the restart it was all Satterlee as he immediately sprinted out to a healthy lead over Jared Miley and Tyler Hershey.

While Satterlee was dominating the action, the complexation of the top five changed on lap 21 as a car slowed coming off of turn two right in front of top five runners Dylan Yoder and Danny Snyder causing both to become involved as the yellow flag was brought out. Dylan Yoder and Snyder both headed to the pits to make repairs and returned.

When racing resumed Satterlee immediately ran away from the field and lead the remainder of the race to take the big win over Tyler Hershey, Jared Miley, Andy Haas and Dylan Yoder who blasted through the field after pitting.

“We had a really good night, certainly drawing the number one pill made my job a lot easier,” commented Satterlee in victory lane with announcer Barry Angstadt. “Starting up front made a lot of difference today, but our car was good, and I was able to get up to the lapped cars pretty good and I don’t know what kind of lead I had at that point but was just trying to make smooth laps and keep myself out of trouble. Thanks to Big Diamond and ULMS and all the fans for coming out tonight and supporting us. We couldn’t do without everyone.”

The Insigner Performance Modified 25-lap feature was completely dominated by Duane Howard as he obliterated the field on this night. Pole-sitter Corey Renninger took the initial lead at the start with Ryan Watt taking the lead from Renninger on lap four. Meanwhile the “Diamond Cutter” Howard was making quick work of the cars in front of him from his ninth starting spot.

Early leader Renninger would bring out the only yellow of the race on lap four when he pulled to stop in turn two. Howard who started in the ninth spot was already up to second in only four laps of competition. Watt would lead on the restart, but Howard was applying the pressure and on lap seven Howard made his way past the No. T102 of Watt to take the lead. Howard would leave the field in his wake as he easily pulled away setting a torrid pace. While Howard was in his own zip code on this night the action was hot behind him with Watt trying to hold off the likes of Brett Kressley, Craig Von Dohren who had made their way into the top five. Those three drivers ran nose to tail for the remainder of the race. Meanwhile Howard continued to lap the field and take starter Jeff Merkel’s checkered flag by almost a half a lap for his second consecutive win and third of the year. Watt held off Kressley for second with Von Dohren and Rick Laubach completing the top five.

“Butch Getz and the whole team gave me a great race car tonight,” said Howard after the race. “This car could rotate the bottom so good tonight and that is what you want to do here. The Billy the Kid Performance engine and Bicknell race car was just on point tonight. The Getz family and everyone involved with this team work so hard to give me good race cars and tonight was a good night.”

The USS Achey Crate 602 Sportsman 20-lap main event proved to be the best race of the night with Logan Watt holding off the strong challenges of points leader Brandon Edgar to win his second Crate feature of the season. Brandon Firestone led at the drop of the green from his pole starting spot. Firestone’s lead was short lived as he broke on lap three to bring out the caution handing the lead over to Watt. Three-time 2022 feature winner Brandon Edgar is now in second using the outside to move through the field.

The youngster Watt and Sportsman veteran Edgar then proceeded to put a show on for the fans. Watt was able to pull out to a small lead, but Edgar remained in striking distance. With five laps to Edgar started to move in on Watt and the last three laps was all over the leader. The last lap saw Edgar try to nose underneath Watt through turns three and four, but Watt kept his car straight and his pulled off turn four with his lead still intact to take the win. Edgar finished second with Danny Buccafusca, Matt Yoder and Jordan Henn the top five.

The Red White and Blue Roadrunner feature started with a couple of no starts as points leader Mike Reichert was done for the night after losing a right rear tire. When the race started CJ Ferguson led lap one from the pole with Dave Schultz taking the point on lap two. Schultz held the lead throughout the race until lap 16 when multi-time winner Alex Schoffstall made his way to the front. Schultz’s great race came to an end after spinning on lap 18 for the final yellow of the race. Schoffstall sprinted away on the restart to win with Feguson, Chuck Fayash, Glenn Rowan and Tod Roth Jr the top five.