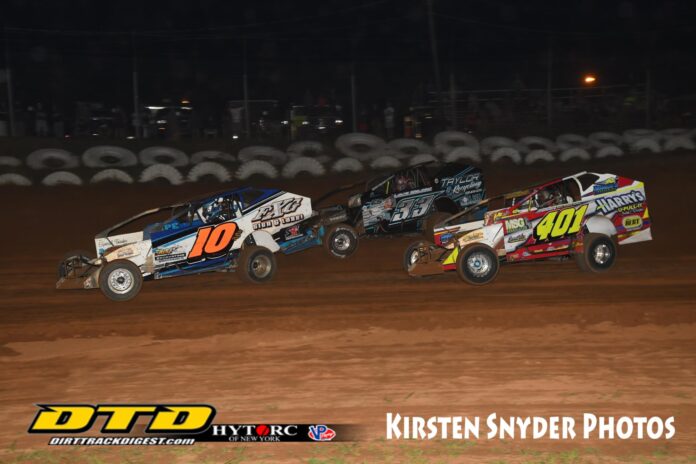 MINERSVILLE, PA-Last Friday night Big Diamond Speedway was once again a victim of Mother Nature when rain forced cancellation of the night activities. This Friday night August 5th, Big Diamond returns with a big night of racing culminating with a $4,000 to win feature event for the Insigner Performance modifieds on Dave Kamp Memorial night. The USS Achey Crate 602 Sportsman and the Red White and Blue Autos Roadrunners will also race for some extra cash. Also on the racing card will be the Central PA Legends capping off the night.

The Dave Kamp Memorial race is an annual event run in the honor of a man who was dedicated to the sport of racing who called Big Diamond Speedway his home. Dave was a gentle giant of a man who was best friends with Johnny Deatrich who raced at Big Diamond from 1993 to 2004 in many divisions. Dave was a crew member for Johnny and got the itch to race himself. Dave started racing in the Roadrunner and Street Stock division and had some success winning features at Big Diamond and other local speedways. Dave always joked with his good friend Johnny that once he caught and passed Johnny’s win total, he would never let him forget it. Unfortunately, Dave was never able to get to that point. Dave was two weeks away from him 40th birthday when he was on his way to the hospital because he wasn’t feeling well only to suffer from a massive heart attack and pass away while going through a toll booth.

“I have the race to remember him and to celebrate his memory and love of racing by putting money and prizes into the support classes that he loved and dedicated his life to. It’s always been a great race for all the drivers both those that knew him as well as those who didn’t” explained Johnny. “To keep his memory alive and remind us to cherish the time we have with friends and loved ones, remember to enjoy and make time for the things we enjoy doing since you never know when your time is up.

Friday night’s action as always is highlighted by the Insigner Performance Modifieds who will race 25-laps for a $4,000 first place prize. The race for the 2022 Modified title could not get any closer as Duane Howard and Brett Kressley sit tied atop the standings with the winner of the last modified feature run Craig Von Dohren lurking in third not far off the lead. Howard leads the way in wins with three while both Kressley and Von Dohren have two apiece. With only a month left in the season, expect the championship battle to go down to the final night.

It will be a $1,000 to win 20-lap feature this Friday for the USS Achey Crate 602 Sportsman division. Brendan Edgar leads the points standing with a commanding lead over Danny Buccafusca and Logan Watt. Edgar and Buccafusca are tied with three wins apiece while the teenager Watt is right behind with two. The competition in the Crate division is second to none with many drivers each week capable of taking the win.

Alex Schoffstall has come on strong in the past couple of weeks to overtake previous points leader Mike Reichert to take control of the 2022 Red White and Blue Autos Roadrunner season long championship race. Reichert who has suffered some troubles in recent weeks will no doubt be back in form to try and regain the lead. This week their will be extra money on the line for the Roadrunners with the feature event paying $500.

Completing the night’s racing card will the Central PA Legends who bring their exciting brand of racing to the Schuylkill County.

Pit gates will open this Friday at 5:00 PM with Grandstand gates opening at 5:30 PM