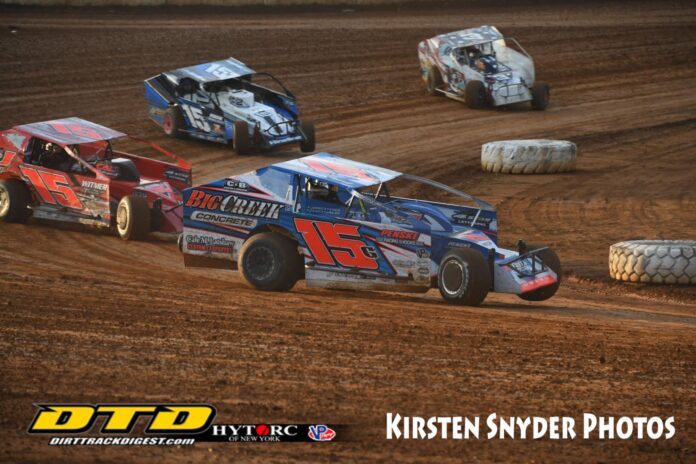 MINERSVILLE, PA-This Friday night August 12th will be the only appearance of the Winged 410 Sprints in 2022 at Big Diamond Speedway. The 410’s were scheduled to appear back on June 7th but unfortunately the show fell victim to Mother Nature. This Friday night they will be back to show off the speed and skill the winged warriors possess as they apply their trade around the Schuylkill County dirt oval.

It will be a night of high-speed action on Friday night as the Insigner Performance Modifeds, USS Achey Crate 602 Sportsman and the Red White and Blue Autos Roadrunner join the 410 sprints to bring the fans a fantastic night of racing.

The 410 sprints will race a 30-lap feature event paying a cool $5,000 to the winner with $500 to take the green along with bonus money courtesy of Dereka Mae Designs, The Four-Wide Salute Podcast, Penske Shocks, DirtTrackDigest.tv and Sprintcarunlimited.tv.  Last year’s winner Cory Haas will be in attendance to try and defend his triumph and make it two in a row. Current points leader at both Williams Grove and Lincoln Speedways Freddie Rahmer has indicated to Big Diamond that he will be in attendance this Friday night along with a host of others. In addition to both Haas and Rahmer, drivers who have indicated that they will be in attendance at Big Diamond this Friday include Austin Bishop, Chat Trout, Devon Borden, Dylan Norris, John Walp, Jordan Givler, Kyle Moody, Mark Smith, Ryan Smith, TJ Greve, Tyler Ross, Tyler Walton and Billy Dietrich. Other drivers and teams are also expected to compete. Please refer to the Big Diamond Speedway Facebook page for the 410-competitor information.

With only three races remaining in the battle for the 2022 Insigner Performance Modified championship, the race is too close to call with only 30 points separating the top three drivers. After an inspiring run from the back of the pack last Friday, Duane Howard now leads Brett Kressley by 20 points. Craig Von Dohren has vaulted himself into the race for the championship with a steady run of top five finishes including a couple of wins. Von Dohren has done this despite not making the feature on opening night due to a blown motor. Last Friday night saw Rick Laubach return to the driver we all know he is capable of being as he dominated the Dave Kamp Memorial race to return to victory lane.

Only three weeks ago, Brendan Edgar looked to have the 2022 USS Achey Crate 602 Sportsman all but wrapped up with a commanding lead. However, Danny Buccafusca has strung together three wins in a row to close the gap. Edgar still has over a 100-point advantage but one misstep by Edgar along with another good race for Buccafusca would put a big dent into that lead with only three weeks remaining.

With his win on Friday night, Mike Reichert regained the points lead in the Red White and Blue Autos Roadrunner. Reichert took advantage of late race mishap last Friday to score the win. Now in second place in points Alex Schoffstall fell victim to a late race crash last Friday and scored a DNF finish. This Friday night will find the roadrunners once again show the fans their exciting brand of racing.

General admission on Friday night will be $30, Kids under 16 are free.