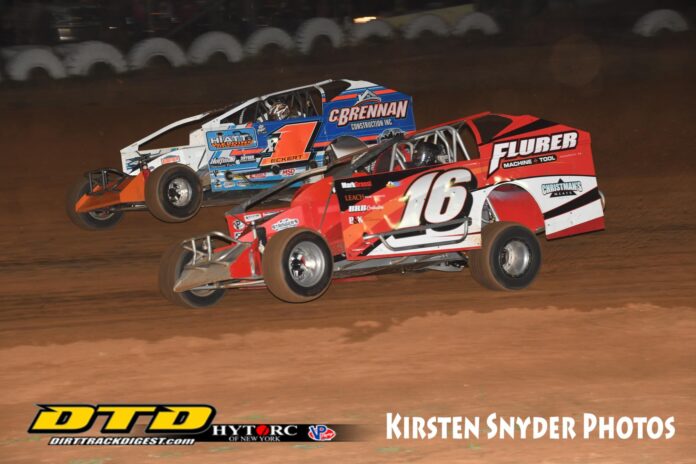 MINERSVILLE, PA –Big Diamond Speedway was the place to be on Friday night! With chamber of commerce weather, it was the perfect night for some racing and the fans came out in droves to support the night as the 410-Winged Sprint cars were on the bill for the night.

Mark Smith has shown his knack for getting around the Big Diamond Speedway in the past. Smith has won three feature events at Big Diamond in his career while racing with the URC Sprints so it shouldn’t come as a surprise as Smith led wire to wire in winning last night’s 30-lap 410 Sprint car feature. In the Insigner Performance Modified division it was Louden Reimert finally winning his first career modified feature after being so close on numerous occasions. Jordan Henn was the winner of the USS Achey Sportsman feature with Alex Schoffstall once again victorious in the Red White and Blue Autos Roadrunner class.

27 Sprint cars signed in for the night’s action at Big Diamond. The 24-car starting field was led to the green with Mark Smith and Freddie Rahmer on the front row. Smith jumped out to the early lead with Rahmer close behind.  The first yellow of the race was on lap four as 2021 Big Diamond Modified champion Timmy Buckwalter who was making his 410-winged debut spun in turn four. Rahmer gave Smith all he could handle on the restart to take over the top spot, but Smith worked the middle groove to perfection and was able to hold off Rahmer’s charge. Before lap five could be scored Travis Scott stopped in turn two to bring out the yellow once again.

This time on the restart, Smith was ready for Rahmer’s charge and easily led the way. Smith continued to lead as both he and Rahmer started to approach the tail end of the field to start putting cars a lap down. Rahmer caught Smith and started to make his move but the yellow was back out for Dylan Norris who spun right in front of the flaggers stand. While Smith and Rahmer were leading the way, another player was now into the mix as Jeff Halligan had moved into third place. When the race resumed, Smith was once again away with the lead as Rahmer was now forced to fend off the challenges of Hannigan for second.

Lap 10 saw Hannigan make his move for second as he zipped past the No. 8 of Rahmer now setting his sights on the leader Smith. Smith was now having to battle lapped traffic as Hannigan was starting to pressure him for the lead. While Smith was slowed by the lapped traffic Hallingan made his move on the inside coming around to complete lap 20. Halligan was able to use a slide job and take the lead, but it was short lived as Smith turned back underneath Halligan to regain the lead as the No. 45 of Halligan bounced his right rear tire off of the front stretch wall. Once Smith held off that challenge, Smith’s expertise and prior experience at Big Diamond paid off as he was able to masterfully work his way around the lapped cars to hold off Halligan for the $5,000 first place prize. Halligan was forced to settle for second place with Rahmer in third. Tyler Ross and Kyle Moody rounded out the top five.

“I was starting to get a little free towards the end,” said Smith in victory lane with Sprint Car victory lane announcer Bert Wojik. “I ran a lot of stagger which I normally do that but and I started to get free and had to get my wing back and that was where he (Jeff Halligan) was getting me. Lapped traffic was kind of slowing me up but it’s our job to get around them. Just putting that little bit of water around the top really opened the track up and whoever you got doing track right now you better pay them a little more money. I am just starting to get some stuff rolling here with the 410 because we don’t run it enough. It’s kind of a bit different than running a 360 and I think we are on to something but we are not quite there yet, but this is a good start.”

After four years of trying and many close calls, Louden Reimert was finally able to call himself a winner in the Insigner Performance Modifieds. Corey Renninger and Heath Metzger led the field to the green flag with Renninger darting to the front to lead lap one. Lap two saw Shawn Light spin to bring out the first and only yellow of the race just as Mike Lisowski was making a bid for the lead. Lisowski would out power Renninger on the restart with Ryan Watt in the No. T102 moving by Kevin Beach and into third. Reimert who started in the sixth spot was now moving through field and up to fourth as Lisowski led the way. One lap later both Watt and Reimert moved past Renninger and into second and third. Watt was working the outside as Reimert was down low and as lap four was scored it was now Reimert in second place. Lisowski who had a sizeable lead at the time was now looking over his shoulder as Reimert was running him down. Lisowski was scored the leader on lap 12 but now Reimert was there and as the field took the crossed flags from starter Jeff Merkel to score lap 13, Reimert hugging the inside line was now your new leader with Lisowski, Watt, Nick Rochinski and Brett Kressley the top five.

Once in front, Reimert was able to stretch his lead as now all eyes were on championship contenders Kressley, Duane Howard and Craig Von Dohren. Kressley using the extreme outside was making his way towards the front as Howard and Von Dohren were battling with Jeff Strunk right outside of the top five. Kressley continued to power his way toward the front passing Rochinski and Watt to move into the third spot. Kressley caught Lisowski for second and two young veterans swapped the second spot back and forth until Kressley was finally able to complete the pass but without a caution Reimert was to far out front for him to catch. Reimert streaked underneath the checkered flag for his first ever career modified win at Big Diamond. Kressley was a strong second with Lisowski in third. Watt finished in fourth place with a hard charging Howard having to settle for fifth.

“This is crazy,” said a relieved and happy Reimert in victory lane. “I have raced here a crazy amount of times in my life and have never been able to get it done and it just feels good after so long to finally get it done. It feels good to finally have it all pay off.”

Commenting on the track conditions after racing after the 410 sprints, Reimert said. “It made it slick, it made it a lot more racier than usual I thought. I won so obviously I am going to say that. It slicked off really good and I am usually pretty fast on slick tracks. I figured we would have a good run and I just needed to put my head to it and put together 25 good laps.”

The USS Achey Crate Sportsman 20-lap feature was marred by numerous yellow, red flags and pileups which forced the track officials to cut the race to 15 laps. A huge pileup occurred on lap one as Kevin Kaplafka went around in turn two involving at least a dozen cars including top three in points of Brandon Edgar, Danny Buccafusca and Logan Watt. With the track blocked, the red flag was brought out to stop the field. Fortunately, most cars were able to continue. The restart once again saw the yellow come out as Daryl Dissinger spin collecting Talan Carter and Logan Watt forcing yet another complete restart. Meanwhile during all of this, Jordan Henn who was forced to start in the rear was now all the up to the tenth spot before a lap was completed.

When we finally got to racing Brandon Oleski led lap one with Chad Putalavage taking over on lap two. Jordan Henn was on the move and entered the top five as the field scored lap three.  A plethora of yellow flags continued to plague the race as Henn continued his charge to the front. Finally, we had a stretch of green flag racing and on lap seven it was Henn now the new leader. Henn stretched his lead over second place Putalavage. Lap 13 proved to the tipping point for the officials as a spin in turn three slowed the action and another big pileup on the restart bringing out the red flag. At this point the drivers were told it would be a two-lap dash to the finish with the checkered flag waving on lap 15. Henn would lead the remaining two laps to take the win with Kyle Kania, Chad Putalavage, Kevin Olenick and Brandon Edgar the top five.

The Red White and Blue Roadrunners feature event saw another classic battle as track title contenders Alex Schoffstall and Mike Reichert battled hard for the win. Dave Schultz would lead lap one but it wasn’t long before Schoffstall and Reichert were in positions one and two. Schoffstall would get past Schultz to the lead, but Reichert came with him and passed Schoffstall to lead lap seven. Yellow slowed the race on lap nine and on the restart, Schoffstall would go back in front to lead lap ten. Reichert stayed right on Schoffstall’s bumper the rest of the way, but Schoffstall was up to the task to win his seventh race of the year over Reichert, Glenn Owen, Chuck Fayash and Jarod Bassininsky.