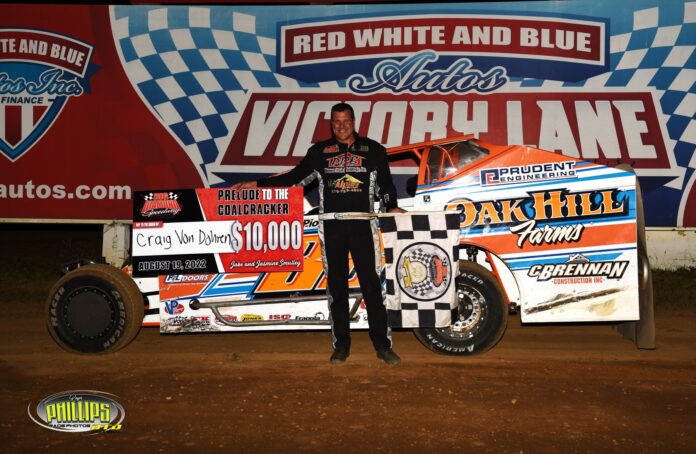 MINERSVILLE, PA-Craig Von Dohren makes his living driving a racecar so we should not be surprised that when the bigger money shows are being run, Von Dohren is always in the mix. Friday night at Big Diamond Speedway, Von Dohren made a statement that he will be the one to beat come the Jack Rich Inc Coalcracker 72 in less than two weeks.

Von Dohren parlayed a good sixth place starting by getting the lead on lap 16 and then proceeded to hold off first Louden Reimert and then Duane Howard to win the Prelude to the Coalcracker and the $10,000 first place prize.

This was a special win for Von Dohren this season in the sense that this was the first time he was able to get the Dave Dissinger No. 88X to victory lane at Big Diamond. Von Dohren’s previous two wins this season at Big Diamond came while driving the Brueche & Sons No. 30 due to the Dissinger car suffering from motor woes.

“It is good to get Dave’s car back in victory lane,” said the victorious Von Dohren in the tech shed after the race. “We have just struggled here a little bit, running after the sprint cars last week tricked us a little bit and we just missed it a little bit. It’s hard racing here and it feels good to get one for Dave (Dissinger). We had a bunch of people here from Prudent Engineering who came onboard this season, which was pretty big for us and unfortunately, we had nothing to show for it until tonight. So, it was good to have them in victory lane with us.”

The track was in good shape which provided great racing allowing Von Dohren and others to search around for the fastest line.

“Honestly, I just really didn’t know where to go,” explained Von Dohren. “The top felt pretty good, but the bottom is traditionally the place to be through (turns) three and four and when the yellow came out that one time I ran up top there it seemed to be pretty clean so I thought some guys might try to run up there so I figured I would try it. I did stumble up there for a couple of laps but once I got my rhythm down and was able to get in there right, I was okay.”

“You still don’t know who is chugging along on the bottom. Louden (Reimert) is good on the bottom here. I saw the No. 15 up on the scoreboard and thought it was Little Billy (Pauch Jr), I never thought of it being Duane since he started back further but then I saw it was Duane when the yellow came out and I know how good Duane is on the bottom here, so I knew I had to keep running perfect laps.”

Despite missing the first feature of the season when the No. 88X blew a motor in the heat race, Von Dohren finds himself third in the points behind Kressley and Howard. It has been quite a comeback for the Oley, PA driver.

“We’ll take being where we are right now in the points especially after having the motor problems we had earlier,” said Von Dohren. “We don’t race here for the points. We just want to go with the wins here, it is usually $4,000 to win here with tonight being $10,000 so we just want to go for the wins and if the points come, they come. So, we’ll wind up where we do, and we will see what happens next week.”

For Von Dohren, it doesn’t matter what car he has been in or what track he is racing in 2022, it has been a great season. The DIRT Motorsports Hall of Famer has a total of 15 wins consisting of 11 wins at Grandview, 3 wins at Big Diamond and a single win at Georgetown. Once again, the past Saturday he stood in victory lane making it a weekend sweep.

“We have had a great year,” cited Von Dohren. “No matter what car I am driving, they are all the same. Dave’s (Dissinger) car is a twin to the (Brueche) No. 30 and people keep saying we should run the No. 30 here every week but it doesn’t really matter, they are all twins. The motors are twins, everything is the same on all of them, but it just wasn’t going good up here for some reason and we just had to sort it out. I was just on the phone today with (Pete) Morgantini and he asked me what we needed with the motor, and I told him I wasn’t sure because we didn’t have the car right yet. Tonight, we had the car the way we needed it to be, and we had some luck along the way. I was right behind (Jack) Butler when he got turned around there and just missed him, that could’ve been disastrous. It just shows that even if you are good, you have to be lucky as well.”

Duane Howard and the Butch Getz No. 15G racing team have arguably been the fastest and most consistent team all season at Big Diamond. If not for a bad night when Howard was caught up in a turn one incident and ended up on his roof, the team might have clinched the 2022 points title already. Friday night, Howard charged from his 15th starting spot to finish a strong second.

“The heat race sort of dictated our finish tonight,” explained a disappointed Howard. “Not getting into the redraw really hurt us forcing us to start back to far and not having the track position early. I ended up using up the tires getting to the front and that was the difference. Just didn’t have enough tire left to challenge Craig (Von Dohren). We had a chance on that last restart, but Craig was just a little bit better than us tonight. I needed to do better in the heat to get us into the redraw. We have a very good consistent car here all year and I don’t there is a car out there that can rotate the bottom like we can but tonight I just didn’t have enough tire left to be able to do that. We’ll just see how points play out next week and if it is meant to be it is meant to be, we will just keep doing what we do.”

The car count for the Prelude to the Coalcracker showed 30 cars signing in. Heat race victories went to Louden Reimert, Billy Pauch Jr, Scott Albert & Jack Butler. Jeff Strunk was the winner of the consi…

At one point if the 50-lap feature, the top three drivers consisting of Craig Von Dohren, Louden Reimert and Duane Howard all list their hometown as Oley, PA…

Jack Butler once again looked strong at Big Diamond, the young driver just needs a little luck when it comes to feature time. Butler won his heat on Friday, found himself starting the feature in third only to be a victim of some over aggressive driving on lap one which saw Butler facing the wrong way in turn two. Butler pitted, came back out worked his way back to an 11th place finish…

Ryan Krachun made his long-awaited return to Big Diamond. Krachun who was the winner of the Money in the Mountains race back in April unfortunately was the first car out on Friday night finishing in 24th…

Is there anyone who can stop Danny Buccafusca in the USS Achey Crate 602 Sportsman division? The Rockaway, NJ “Rocket” won his fifth crate 602 feature of the season Friday night and if it wasn’t for his No. 20 being caught up in a wreck two weeks ago, we might be talking about Buccafusca winning the last four weeks, he has been that good in recent weeks…

Bridgewater, NJ driver David Hunt made the trip to compete on Friday night. Hunt did well, getting into the redraw in his heat and finished a respectable 14th in the feature. Talking to Hunt, he enjoyed his night and plans to be back for the Coalcracker 72…