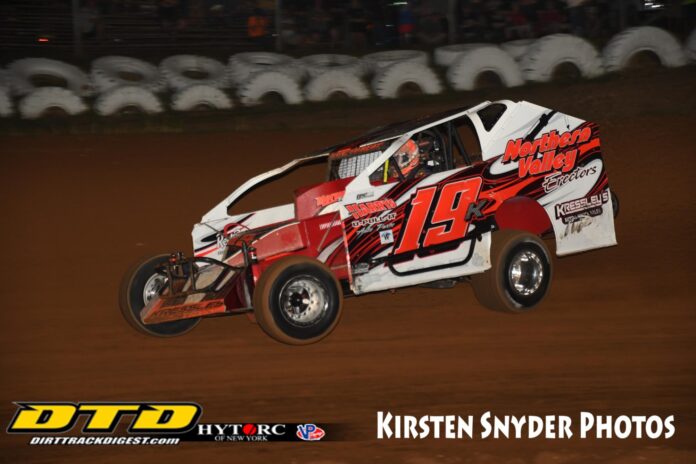 MINERSVILLE, PA – Brett Kressley bagged $17,000 in his first Coalcracker 72 triumph. Kressley came out on top of a back-and-forth battle for the win with Craig Von Dohren, securing the lead for good in the late stages of the race.

Von Dohren took control of the race at the drop of the green, with Dillon Steuer quickly working his way past a couple cars and into second. Steuer kept Von Dohren honest in the early stages, hanging a handful of car lengths off the back of Von Dohren throughout the first 20 laps. During this time, Kressley picked off a few competitors, sliding into third after starting 10th. While Steuer slowly caught Von Dohren, Kressley was quickly catching them both.

As the race neared halfway, Kressley worked top and bottom to get by Steuer, eventually sliding past Steuer on lap 35. Then, Kressley reeled in Von Dohren, using a lapped car as a pick to take the lead on lap 40. Despite catching and passing Von Dohren, Kressley could not pull away. Two laps later, Von Dohren drove under Kressley to regain the top spot.

Kressley kept Von Dohren within arm’s reach, and when Von Dohren bounced on the turn three cushion on lap 52, Kressley dove to the bottom and muscled back to the lead. This time, Kressley pulled away, qucikly putting a comfortable gap between himself and Von Dohren.

As the lap counter clicked closer to 72, Kressley only got quicker. Kressley pulled away and worked through traffic cleanly, allowing him to reach the checkered flag first for his first Coalcracker 72 win. Following Kressley across the line was Von Dohren, Duane Howard, Billy Pauch Jr., and Steuer.

“I knew this coil car would shine after lap 50,” Kressley said of his rear suspension choice. “Those bar cars, like Duane, he was better than us on a 30-lap run, but I knew this thing would be killer once we got a longevity race. We paced ourselves pretty good, I wasn’t giving it everything we had expecting some cautions, but we got over halfway and I figured we’d change the plans and went for it. It was a good battle between me and Craig, but at the end of the day I think the better car won.”

The 30-lap USS Achey Coalcracker Crate 602 Sportsman race saw Kevin Olenick take the lead at the drop of the green over polesitter Tajae Adams. The first half of the race saw multiple cautions slow the race. A lap five restart saw Nick DeSantis take the lead away from Olenick as Logan Watt was moving towards the front quickly from his sixth starting spot and into second. After one lap the yellow as out again and on this restart, the teenager Watt outpowered DeSantis into turn one on the outside to take the top spot. Two more restarts on lap nine and lap eleven didn’t deter Watt as used the inside line to hold off DeSantis. Lap eleven would prove to be the last caution of the race as Watt distanced himself from the field.

While Watt was leading the race, Jordan Henn worked his way under DeSantis to move into second. Henn had nothing for the leader as Watt who kept stretching his lead. With no yellows to slow his pace, Watt had a commanding lead as he streaked under starter Jeff Merkel’s double checkers to win the race and the $1,500 first place prize. Henn finished second with DeSantis, Brad Brightbill and Skylar Sheriff completing the top five.

“Oh my god, this is awesome. I can’t believe it,” said Watt in victory lane. “We had been having some trouble on restarts with the car stumbling, so we change a little something on the carburetor and it was really good. The car felt really nice, and I was fortunate to get the restart next to (Nick) DeSantis and he was fast, so I knew I had to try and go around the top and I was able to get him. You just to beat those to the front and they you get that clean air. Sometimes you get to the lapped traffic and that can be hard, but we are here. Winning this race is huge, I can’t believe it.”