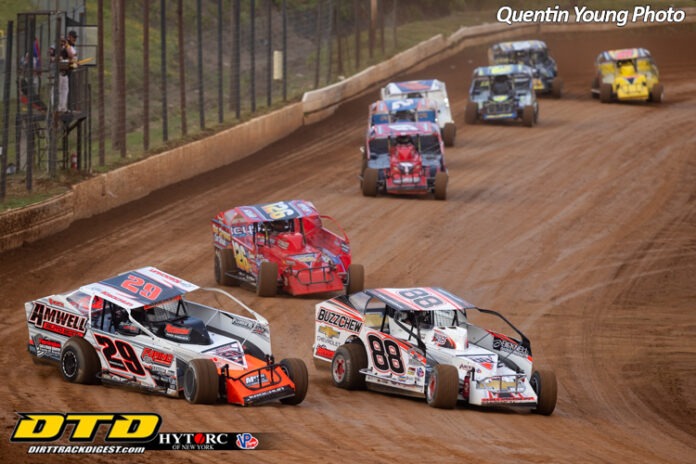 With the 2023 racing season fast approaching, Big Diamond Speedway promoters Jake and Jasmine Smulley have set a schedule that will give the fans a little bit of everything in 2023 at the Minersville, PA dirt oval.

Before the racing gets underway, it will be the 2nd Annual Dirt Track Racing Festival & Parade of Power on Saturday April 1st followed by an open practice session the next day (Sunday, April 2nd).

The 51st season of racing will get underway on Friday, April 7th with the Thaw Brawl season opener paying some extra cash to all divisions and will conclude on Sunday, September 3rd with the annual running of the prestigious Coalcracker 72. In between those dates will be many great racing events for the fans to enjoy.

The Quandel Concrete 358 Modifieds along with the USS Achey Crate 602 Sportsman and the Red White and Blue Autos Roadrunners will be the tracks regular divisions throughout the year. Joining them on certain nights will be some great traveling series.

2022 saw the SUPER DIRTcar series return to Big Diamond for the first time in many years with great success and the series will return in 2023 with the running of the Anthracite Assault on Tuesday July 11th. Also returning to the speedway in 2023 will be USAC Amsoil National Sprint Cars as part of the Eastern Storm. The traveling series was a big hit in 2021 and will be back on Thursday, June 15 to thrill the fans with their exciting brand of wingless racing.

Other highlights scheduled for 2023 will be the annual Money in the Mountains race for the Quandel Concrete Modifieds on Friday, April 14 paying $10,000. The Mid-Atlantic Modifieds will make their Big Diamond debut on May 5th as part of Modified Madness night. Other series making visits in 2023 will be the URC Sprints on May 19th. After a highly successful debut in 2022, the ULMS Late Model series will once again return on June 2nd and the Winged 410 Sprints will be back to thrill the crowd on August 11th. The Xcel 600 modifieds will make the first of their many visits to Big Diamond on April 21st. The 358 sprint cars will visit the speedway on July 7th for the first time. Other divisions returning in 2023 are the Central PA Legends, the PASS Sprint Cars and the Winged Super Sportsman.

Sunday, April 2nd: Practice, open to any car with a roll cage.