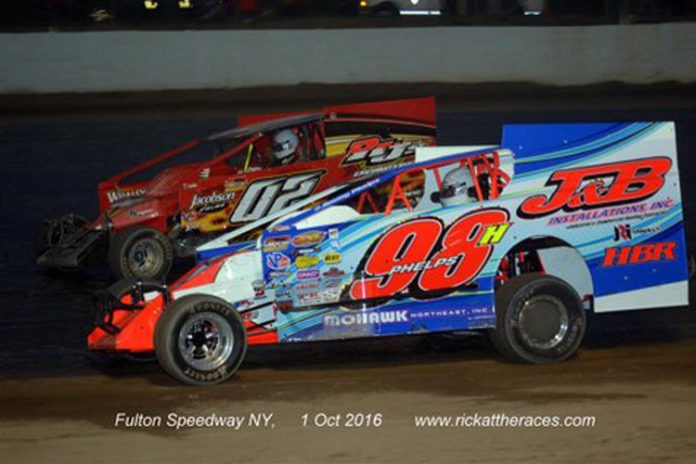 BALDWINSVILLE, NY – Brewerton and Fulton Speedways’ exciting 2017 schedules are taking shape with major events at both speedways that will give race fans high-speed racing excitement in must-see events.

The 32nd annual Outlaw 200 Weekend, one of the crown jewels in all of modified racing, will be held at Fulton Speedway on Friday September 29th and Saturday, September 30.

The Hurricane 100 will again be a stop on the DIRTcar 358-Modified Series chase on Thursday night, October 5th. “The Race of the Week” will be a Super DIRT Week satellite event for the 25th time in 2017.

Fulton and Brewerton will again be a hot bed for the Super DIRTcar Sportsman Series. Brewerton will host Sportsman series events as part of the Duel at the Demon Super DIRTcar Series event on Friday, September 15 and again on Thursday, October 5 as part of the Hurricane 100. Fulton Speedway will kick off the Sportsman series during Highbank Holdup Weekend April 28 and 29 along with the huge Industrial Tire of CNY Sportsman Shootout at the 32nd Annual Outlaw Weekend.

The Craftsman World of Outlaws Sprint Car Series will make a second consecutive visit to the Fulton Speedway as part of Super DIRT Week. The Saturday, October 7 showdown will once again be a fan favorite.

360 Sprint cars will visit the two tracks a total of six times in 2017. The Lucas Oil Empire Super Sprints will visit Fulton Speedway three times in 2017 – Friday, April 28 as part of Highbank Holdup Weekend, ESS Speedweek on Saturday, July 1 and a new date on Saturday, September 2. The Patriot Sprint Tour visits on Saturday, June 4. At Brewerton, two ESS Sprint dates will again be on the schedule. New this year, the traditional ESS Speedweek date will now be Friday, June 30. The series will also anchor Brewerton’s Labor Day weekend program on Friday, September 1.
Major Events at a glance:

Brewerton Speedway
Duel at the Demon – Friday, September 15
Hurricane 100 – Thursday, October 5
ESS Sprints and Big Blocks – Friday, June 30 & Friday, September 1
The Brewerton and Fulton Speedways “Winter Blast” and DIRTcar Nationals final night viewing party will take place Saturday, February 25 at RFH’s Hideaway located just south of the Fulton Speedway on Route 57. Point Money, trophies will be handed out, this year a buffet dinner will be available to those that want to purchase one. Dress for the event is casual and free to attend. Racers, race teams and fans are all invited for a night of fun, catching up with friends you haven’t seen since the end of the 2016 season.
For all the latest offseason news please visit www.brewertonspeedway.com and also www.fultonspeedway.com . Like the track Facebook pages www.facebook.com/Brewertonspeedway – www.facebook.com/FultonSpeedway .
Any questions about the 2017 season you might have please contact Cory Reed at cory@brewertonspeedway.com or the winter office number (315) 638-4056.