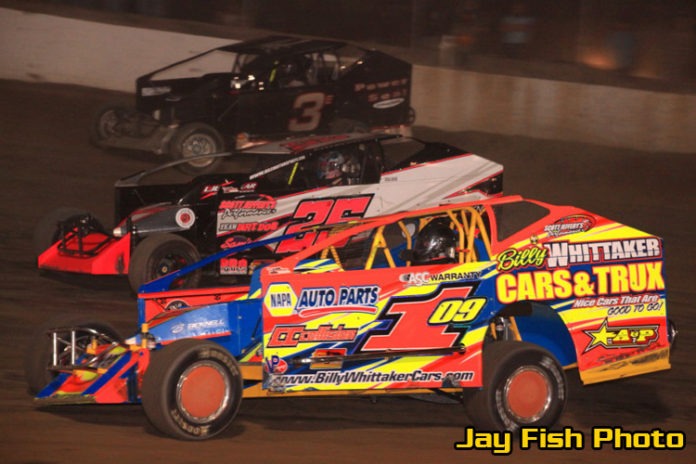 BALDWINSVILLE, NY – DIRTcar Big Block Modified driver Billy Whittaker and his company Billy Whittaker Cars & Trux will have a major presence at both the Brewerton and Fulton Speedways for the 2017 racing season.

Billy Whittaker and his staff want to make sure you are ‘Good to Go’ at the Brewerton Speedway with a VIP Seat upgrade each night at the races. Billy Whittaker Cars and TRUX has teamed up once again with the Brewerton Speedway to heighten the fan experience every week! Stop in and register to win at the designated sign-in booth at the race track and you and up to eight of your family can be rolling in the VIP tower for the night’s festivities! Experience the races like never before! It’s the Billy Whittaker Cars and TRUX Best Seat in the house seat upgrade!!

With the highly successful night of racing and demolition derbies at the Fulton Speedway, fans asked when will there be one at the Brewerton Speedway. That wait is over. On Friday, July 21 Billy Whittaker Cars & Trux will present a night of high speed racing thrills and the sights and sounds of metal-crunching demolition derbies.


If you are in the market for a new car or truck, look no further than Billy Whittaker Cars and Trux, they are just a quick run north of Brewerton Speedway on Rt. 11 between Brewerton and Central Square. Check out their website www.trophyauto.com for a selection of over 250 vehicles. Looking for a nice car for $30, $40 or $50 dollars a week? They have them. Or how about Billy’s Showcase Cars, year-old, late model, low mileage cars for only $60 a week. Check out their like-new TRUX for only 70 bucks a week. They are also an official NAPA Auto Care Center, serving all of Central New York, Syracuse and Surrounding Areas. Need financing? Click on their 40 second finance application right now. Billy Whittaker Cars & Trux, nice cars and trux that are Good to Go! To see the great inventory they have to offer please visit www.trophyauto.com (315) 668-CARS . As always, support those who support racing.

The Fulton Speedway will open Saturday, April 22 for a Test & Tune that is open to any car that runs on dirt. After that the long off-season comes to an end with the highly anticipated ‘Highbank Holdup’ weekend Friday and Saturday, April 28-29.

On Friday night, April 28 the winged warriors of the Lucas Oil Empire Super Sprints and the DIRTcar Sportsman Championship Series will fill the pits. A star-studded field is expected in both divisions to challenge the ‘Highbanks.’ The Modified Super DIRTcar Series and Billy Whittaker Cars and Trux RUSH Late Models will have practice sessions to get dialed in for their Saturday show.