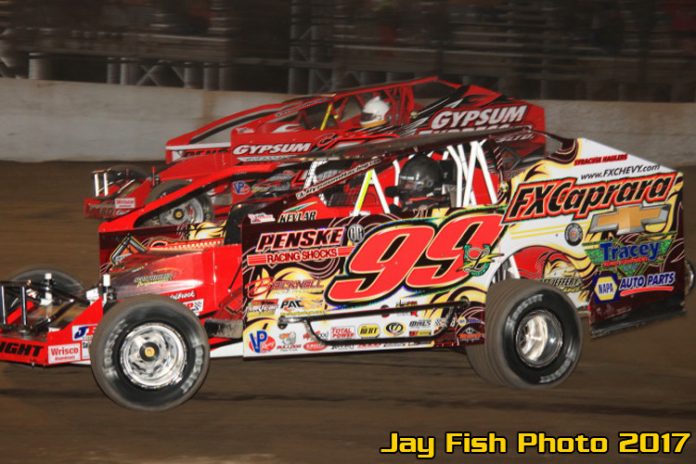 BREWERTON, NY – While Larry Wight started on the pole for Friday’s season opening feature event at Brewerton Speedway, claiming victory was anything but easy. To get his second win of the season, “Lightning” needed to fend off challenges from both drivers and nature to grab the checkered flag.

Wight and teammate Pat Ward shared the front row for the 35-lap feature event, and the pair remained side-by-side for the lead for the opening circuits before an early caution for Gary Tomkins’ flat tire and spin in turn two. Wight and Ward resumed their battle on the restart before the pace was once again slowed on lap eight for an incident involving Tim Sears Jr. and Bobby Varin.

Ward nosed out in front of Wight on the following restart, but his lead did not last for long, as Wight cleared Ward for the lead with a slide job entering turn three. Behind the leaders, Jimmy Phelps passed his cousin Mike Bowman for third, while Billy Decker rose to fifth.

Up above, the weather started to roll in, as light rain began to fall over the field. However, the rain was just light enough that the cars kept the surface dry under racing conditions.


By lap 25, Ward was under fire from both Phelps and Decker for the runner-up position. As second through fourth ran under a metaphorical blanket, Phelps was able to skate under Ward while Decker could not complete the same move. With ten laps remaining, Phelps began to chip away at Wight’s lead, closing to within just a few car lengths in the closing laps. While the action on the track continued, the light rain persisted.

While Phelps stuck a nose under Wight multiple times in the last laps, it was Wight crossing the line first for the opening night victory. Phelps and Decker rounded out the podium while Matt Hulsizer charged from 14th in his second night with a Bicknell chassis to finish fourth. Max McLaughlin completed the top 5 after starting 20th.

“It was a rough ride,” stated Wight in Victory Lane. “I have to give a lot of props to the track crew for giving us this track, as with the grounds being the way they were, we could have easily canceled, but we were itching to get a race in.”

34 SUNY Canton Sportsman signed in for competition on Friday night for Brewerton Speedway’s season opener. After a rain delay following the Modified feature event, defending track champion Ronnie Davis II jumped out to the early lead, trailed by Alan Fink. Davis did not lead for long, as he caught a large rut in turn 1, allowing Fink to drive to the lead with 8 laps completed.

As Fink began to stretch out his lead, Bill Clark and Dave Marcuccilli closed in on Davis’ machine for the runner up position. As second through fourth battled on track, Fink’s lead grew to a full straightaway. Over the remainder of the caution free 25-lap feature, Alan Fink was never challenged and cruised to the win in the first feature of the year. Ronnie Davis III held on for second, while Bill Clark, Dave Marcuccilli, and Tony Finch II rounded out the top five.

In Mod Lite action, Zack Babcock snatched the lead away from reigning division champion and polesitter Jeff Sykes on lap 14 of 20 and held on for the narrow victory. The win was Babcock’s first ever at the track, and first ever in a Mod Lite.

Brewerton’s 2016 track champions being passed for the win was the theme on the evening, as Chuck Powelczyk drove past champion Ray Bechler for yet another 4-Cylinder feature victory.