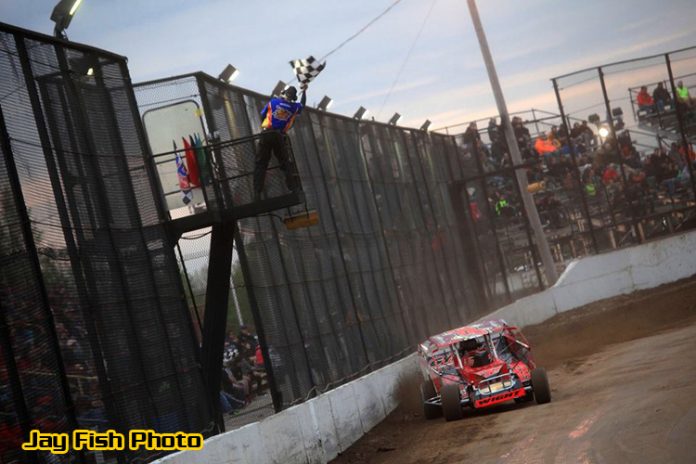 BREWERTON, NY – For the second time in as many weeks, “Lightning” Larry Wight parked his Modified in Brewerton Speedway victory lane. Likewise, Alan Fink and Chuck Powelczyk grabbed their second Brewerton wins of the year in the Sportsman and 4-Cylinder divisions, while reigning Mod-Lite champion Jeff Sykes won his first.

Bobby Varin and Tim Sears Jr. started on the front row for the Modified feature event, with Varin jumping out to a comfortable lead in the opening laps. Varin’s lead did not stay large for long as Sears rapidly closed the gap as the leaders hit traffic. By lap 13, Sears was looking under Varin for the lead, but was pinned behind a lapped car, allowing Varin to inch away again. Varin’s advantage was forcefully diminished as a spinning Lee Gill brought out the first caution with 17 laps completed.

Opening night winner Wight took the initial green in 18th, but advanced fast from his deep starting spot. On the lap 17 restart, Wight moved into the top five, climbing up to third just before another yellow for a tangle between Pat Ward, Ryan Bartlett, and Rich Scagliotta on lap 21.

As the field restarted with 14 laps remaining, Tim Sears Jr. drove past race long leader Varin through the rough first and second turns. Sears was unable to open up any substantial margin between himself, Varin, and Wight, as the trio remained within car lengths as the laps wound down. As Dave Farney gave the five-to-go signal to the field, the battle for the lead intensified, as Varin drew even with Sears. The pair continued to battle with Wight in tow, but with three laps left, hard contact between Varin and Sears left Sears stopped on the high side of turn one with heavy damage to the rear of his machine. However, Sears’ machine could still move, as further contact between the two was made under yellow. Sears retired to the pits, while Varin retained the lead, now with severe front end damage following the confrontation under caution.


On the lap 32 restart, Varin’s damaged car proved undrivable as he spun in turn one, collecting Gary Tomkins, Chad Phelps, and Tom Sears Jr. Wight now found himself as the leader with less than a handful of circuits remaining, followed by Jimmy Phelps and Adam Roberts. Phelps was unable to mount a charge during the final few laps, as Wight cruised to his second Brewerton checkers of the year. Phelps claimed the runner up spot, while Roberts, Max McLaughlin, and Andrew Ferguson completed the top five.

“I was glad just to be top three,” Wight stated in Victory Lane. “Everyone has the same track, but we were able to just find a little smoother line through the top. We were fortunate enough to take advantage of Tim’s (Sears) misfortune. I think Tim really had the car to beat, he could’ve won it, but Bobby didn’t want him to pass him.”

Jack Meeks took charge early in the 25-lap Sportsman feature, and had no chance to run away and hide early, as three cautions in the first five laps kept the field tightly bunched. By the time Meeks could take advantage of a long, green flag stretch, last week’s winner Alan Fink had charged from 18th into the top five, snatching second from Todd Root just after lap 10. As Meeks went to work on lapped traffic, Fink closed, drawing to within a car length just after halfway. On lap 17, Meeks collided with a slowing lapped car attempting to pull into the infield, allowing Fink to drive by and easily take his second win in a row. Meeks held on for second, while Root, Tyler Thompson, and Ronnie Davis III filled out the top five.

Chuck Powelczyk took another win in the 4-Cylinder feature, cruising to the checkered flag for his second win in a row after an early battle with Chris Bonoffski.