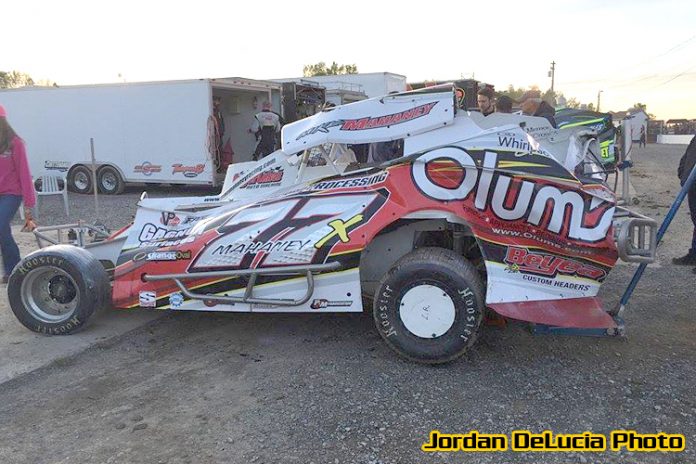 The air may have been chilly on Friday night at the Brewerton Speedway, but some drivers were hot under the collar by the time the final 35 laps of the night were completed in the big-block Modified feature.

Heat number two went just four laps before the most destructive incident of the night took place in the entry of turn one. Larry Wight and Mike Mahaney were battling hard for position when they made contact coming out of turn four, scrubbing wheels with each other down the front stretch. Mahaney got the Olum’s Appliances 77x straightened out just in time to dive into corner number one when Wight and Mahaney’s left-rear quarter-panel came together sending Mahaney over multiple times before landing upside down at the apex of turns one and two.

Safety officials were on the scene quickly to extinguish the small flames around Mahaney’s car as the red flag was thrown, when Mahaney crawled out from underneath his car and sprinted over to Wight, parked in turn two.

“I said ‘What was that about?’” Mahaney elaborated on his words with Wight on the track after the incident.


Mahaney said he was unable to see Wight coming out of turn four, but felt Wight’s left-front tire hit his right-rear quarter-panel before getting into turn one. Mahaney said he knew what had happened when they finally reached turn one.

“He intentionally wrecked me in turn one because he was mad about it,” Mahaney commented on his view of the situation. “I’m obviously furious at Larry, I feel like I deserve an apology.”

However, Wight viewed the incident differently than Mahaney did.

“Mike came up and pinched me in the wall and we both got squirrely, I ended up losing my steering” Wight said. “I can only turn back to the [left] a little bit, and when I hit the brakes the right-front rotor pushed the pucks in. I just didn’t have enough time to react and got into him.”

Wight said there was no intent to cause the wreck, and it was simply a racing incident.

“I don’t ever want to wreck anybody’s equipment, I don’t care who it is,” he explained. “If you just put me in the wall or we just ran side-by-side for 100 laps, nobody needs to be wrecking equipment like that, especially this early in the year.

“It is what it is, that’s racing, it happens. We’ve just got to move on from it,” Wight continued. “You can’t hold grudges in racing – it’s too expensive in this sport.”

Wight was then sent to the rear of the field upon the ensuing restart, where he would finish near the back among the remaining cars.

Feature time for the big-blocks was even more dramatic, culminating with two separate incidents in turn one involving race leaders Bobby Varin and Tim Sears Jr.

Varin lead the first 21 laps of the race before a caution came out on lap 22. Varin would surrender the lead to Sears on the restart, where a tight battle ensued between the two until they made heavy contact in turn one on lap 33, sending Sears hard into the wall near the pit entrance.

The dust settled, and Sears would get his car re-fired just in time to drive into Varin’s front-end under yellow, causing heavy damage to both cars.

Sears took his ride pit-side, while Varin stayed on the track to reclaim the lead before the restart. However, Varin’s front-end damage was too obstructive, spinning him immediately in turn one and collecting Tom Sears Jr. to bring out the race’s fourth caution.

Wight would inherit the race lead and carry it the rest of the way to pick up his second victory of the season at the Brewerton Speedway.

Varin said the incident was the result of Sears’ lane-switching in his attempts to keep the lead.

“As far as I saw, he came down on me, and there was nothing I could do about it” he said. “I thought he was going to go high into one and apparently he wanted the bottom [then] because I was down there.”

Varin also commented on Sears’ actions under the yellow.

“He went out there with the complete intention of wrecking this racecar and taking away our chances of winning the race because he felt like I did something wrong to him,” Varin explained.

Varin continued on to explain how he saw the situation from his vantage point.

“As far as I’m concerned, I was just having a guess at where he was going,” he said. “He was all over the place, covering every part of the racetrack. And I don’t blame him for doing that, but he can’t get upset when he’s trying to cover the racetrack and there’s a car there – he ran right over me.”

Sears had a different view of the incident, saying he got a good restart and was able to attempt the pass out of turn four before the contact was made.

“He showed me a nose and so I just figured he was running the top,” Sears said. “I just moved up a little bit, then he got under me and ran me over.”

When asked for a comment on his actions under the yellow, Sears replied, “Nope, I left it all on the racetrack.”

Varin and Sears also had a smaller incident at Brewerton in week one, where they made contact on the front stretch, resulting in both of them retiring from the race.

PHELPS FINDS HIS WAY TO SECOND

Aside from the controversy-filled event, Jimmy Phelps was able to put together a second-place finish for the second week in a row. Patience was the key to a solid finish, according to him.

“Any time we can come out of tonight, starting as deep as we did, with a second and a pretty straight racecar, it’s a success to us and we’re happy,” Phelps said.

Track conditions seemed to cause drivers some headaches again this week, with clay buildups littering turns one and two, but Phelps knows how hard the track crews are working to deal with inclement weather.

“Brewerton Speedway isn’t one of the best tracks in North America because they’re lazy,” Phelps said. “I know they’re trying, it’s just that we’ve got some water issues and I’m sure that as Mother Nature helps dry the area, it’ll get straightened out.”