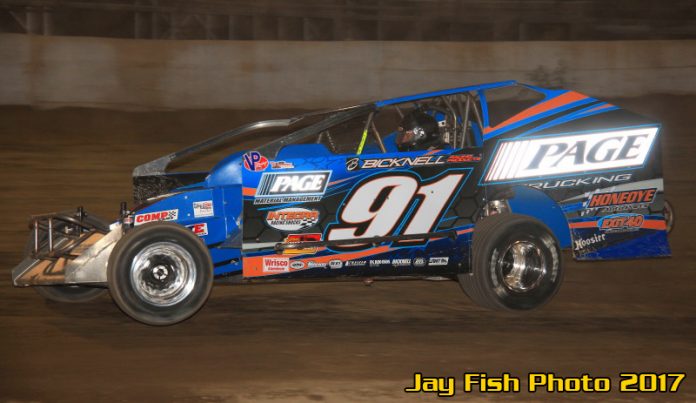 BREWERTON, NY – The last time Brewerton Speedway raced, Billy Decker was forced to park his Mike Payne Racing #91 for the night after his heat race due to a blown motor. However, Decker and team could not be kept down for long, as this week they scored their first win of the season, passing the same car Decker piloted in the feature two weeks ago for the win.

Jeremy Smith took advantage of his outside front row starting spot, rocketing to the lead off the initial start ahead of Mike Mahaney. Smith opened up a substantial lead rather quickly, but a lap 5 caution brought the field together, literally. Exiting the fourth turn, Tim Kerr’s front end collapsed, collecting the cars of Larry Wight, Max McLaughlin, Adam Roberts, and Andrew Ferguson, all of which could continue but Roberts and Kerr. Smith once again jumped out front on the restart, but this time had no quick yellows to slow his pace.

Billy Decker started the 35-lap feature in 14th, but had little issue advancing to the front. By lap 21, Decker had reached the decklid of second-running Tom Sears Jr, taking the spot just a lap and a half later and quickly reeling in Jeremy Smith for the lead. Decker drew even with Smith as the pair crossed the finish line to complete lap 27, but couldn’t completely clear Smith, as the pair continued to run side by side. However, Decker had his nose in front when it counted, as Jim Witko slowed with mechanical issues directly in front of the leaders, forcing the second yellow flag of the event.

On the restart, Decker ditched the field, including the Jeremy Smith #46 that he piloted two weeks ago after losing a motor in his normal ride. Decker remained unchallenged during the final five circuits, but the racing behind him was far from calm. At the checkered, Billy Decker grabbed his 60th win at the track, while Tom Sears Jr. snuck by Smith for second, while Gary Tomkins held off Jimmy Phelps for fourth.

“The track was difficult, obviously it has been a really wet spring,” said Decker. “Even though everyone at Brewerton is working super hard, a track like this opens up different lanes. We just have to focus on getting a clean lap when the guy in front of us doesn’t.”

The Mod-Lite feature was one for the ages, as Josh Kinney took the checkered in a feature that saw the top four running two-by-two for the final six laps. At the finish, Kinney took the win by .04 seconds, while Justin Williams crossed the line in third, glued to Kinney’s rear bumper. Trailing Mullen in fourth was opening night winner Zack Babcock. Altogether, the top four were separated by just .36 seconds at the finish.