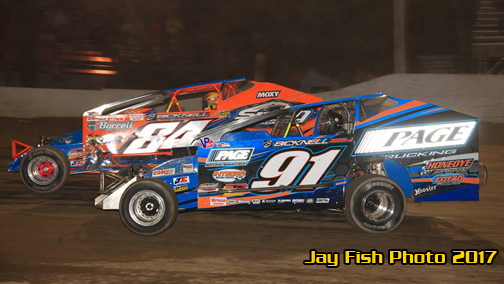 BREWERTON, NY – Billy Decker found himself parked in Victory Lane for the second week in a row at Brewerton on Friday night. Decker’s win puts him at three overall, the other coming in the Super DIRTcar Series event at Fulton, and places Decker on top of the points standings heading into the back half of June.

Mike Mahaney took the lead at the start of the 35-lap Modified feature, but an opening lap yellow for Chad Phelps coming to a stop reset the field. The following restart saw Lee Gill drive around Mahaney for the lead, with Mahaney dropping outside of the top five in the opening laps. With eight laps completed, Jim Wikto’s top five run came to an abrupt end, as he slid off the top of the racing surface entering the third turn. Sixth starting Tim Sears Jr. took advantage of the caution, blasting past Gill for the lead once racing resumed.

As halfway approached, Sears had opened up a solid advantage over Chris Hile and Mike Bowman. Further back, Billy Decker, Gary Tomkins, and Rob Bellinger waged battle for the fifth, with Decker taking the spot with a top-to-bottom crossover to pass both drivers on lap 18. By lap 24, Decker had worked past Bowman and Hile to claim second, but was a full front stretch behind Sears.

Chad Phelps’ machine slowed with mechanical issues with 26 laps completed, bunching up the field and eliminating the gap between Tim Sears Jr and Billy Decker. On the restart, Decker drew even with Sears, but Sears held him off at the time. However, Sears could not hang on for long, as he smacked a rut in turn one with 31 laps in the books, allowing Decker to drive under and past Sears for the lead.

One last caution with three laps left for a Lee Gill and Pat Ward tangle was not enough to derail Decker’s fantastic charge from 17th, as he cruised to his second win of the season at the track. Tim Sears Jr hung on for second, while Rob Bellinger drove from fifth to third on the last lap, passing Mike Bowman and Chris Hile.

“It feels really good,” the victor stated. “Tim (Sears) had a good line going on the bottom, but it started to rut up down there. We were able to find a line further that worked and we were able to get it done”

After second place running Glenn Forward nearly flipped and drew a late caution with five laps left in the Sportsman feature, Tyler Thompson appeared to be on his way to his first feature win in the division. However, Zach Sobotka slipped by on the restart and cruised to the victory, his first of the season. Mod-Lite action saw former track champion Mike Mullen take the win after Casey Sykes came up light on the scales. Chris Bonoffski claimed another 4-Cylinder win, even with a motor beginning to expire in the final laps.