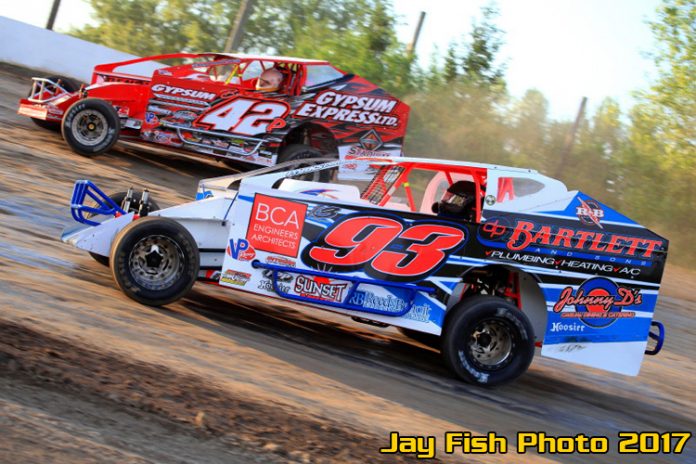 Mike Mahaney started on pole, with Bartlett lining up alongside. Bartlett got the jump on the initial start, blasting around the top of the smooth and slick track to open up a small lead over Mahaney and Chad Phelps. Mahaney and Phelps began battling early, with Mahaney riding right along the inside tractor tires, and Phelps rolling around the cushion. Throughout the feature, the pair would never separate.

Up front, Bartlett continued to expand his advantage, up to half a straightaway by halfway. Mahaney and Phelps continued to duel for second, while Tim Kerr followed closely in fourth. However, Kerr’s run turned sour, as he pulled to the infield on lap 26 with mechanical issues. With Kerr dropping out of the race, Pat Ward moved to fourth, closing in on the duo of Mahaney and Phelps.

Throughout the feature, Ryan Bartlett was never seriously challenged, cruising to the checkered in dominating fashion. Mike Mahaney followed in second, with Chad Phelps and Pat Ward closely in tow. Chris Hile rounded out the top five, while Larry Wight drove from last to finish sixth in the caution free affair.

“This is the first race we’ve finished so far this year with this car,” noted Batlett. “It’s tough. Wins here are just so hard to come by, so you got to get every one you can. Last year when we won, it was a heavy track, so some of the haters said that’s the only reason why we won. Tonight, we were able to back it up.”

Todd Root took the win in the Sportsman event, clawing past Michael Stanton and Nick Krause with just a handful of laps remaining after a ferocious battle for the lead. The trio of drivers swapped the lead numerous times, even going three wide for the lead on multiple occasions. Once the leaders hit lapped traffic in the late stages, it was Root edging ahead for the win.

Casey Sykes crossed the finish line ahead of the pack for the second week in a row in the Mod-Lites, but this time the scales tipped in his favor, allowing Sykes to finally pull into victory lane. Sykes’ first win of the season did not come easy, as he had to hold off a hard charge from Joe Isabell in the final circuits. Chris Bonoffski claimed another 4-Cylinder victory, beating Ray Bechler to the line by a matter of feet.