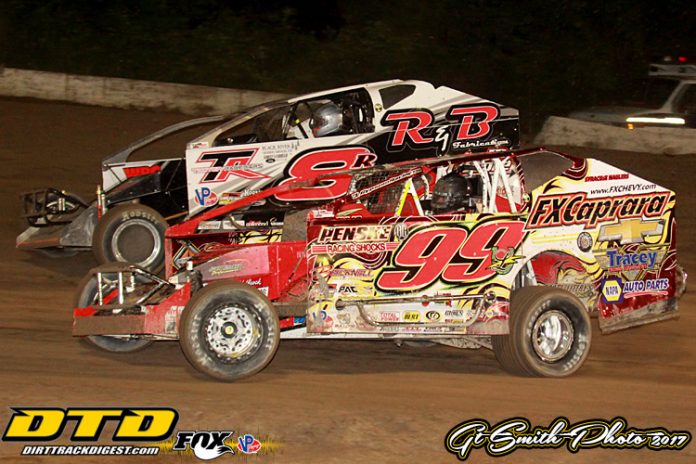 BREWERTON, NY – Larry Wight picked up his third win of the year at Brewerton early Saturday morning, charging from the 11th starting spot to the win on the fast and heavy track.

After a rain delay due to strong thunderstorms in the early evening, Tim Kerr took command at the drop of the green for the 35-lap event, pacing the field in the early going. While Kerr looked strong, Wight looked stronger, reaching fourth with just 12 laps completed. A yellow with on lap 14 brought the field together, but they were not together for long. Using the top side where few opted to go, Wight blasted from fourth to the lead before another lap was scored.

Two more cautions on lap 22 and 24 allowed drivers such as Matt Hulsizer, Jimmy Phelps, and Billy Decker to close in on Wight, but could not mount a charge as they battled amongst themselves for the runner up position. In the end, Larry Wight cruised to another dominant win at the Brewerton Speedway, followed by Hulsizer, Jimmy Phelps, Decker, and Chad Phelps.

“Under yellow, I was able to pack the top side. I knew it would only be there for a few laps afterward, so I had to take advantage of it the first two,” the victorious Wight stated. “Everyone has good cars, good motors, and they are set up well. You really need to get into the top five early to have time to work them. If you don’t, you get in a bind where you really have to use up your car and tires to get there.”


ESS feature action saw Chuck Hebing lead wire to wire, claiming the $3,000 to win event over Coleman Gulick and Paulie Colagiovanni. Alan Fink notched his third Sportsman win of the season, wrestling the lead away from Rocco Leone just past halfway, while Jeff Sykes held of Casey Sykes to take the Mod-Lite main.