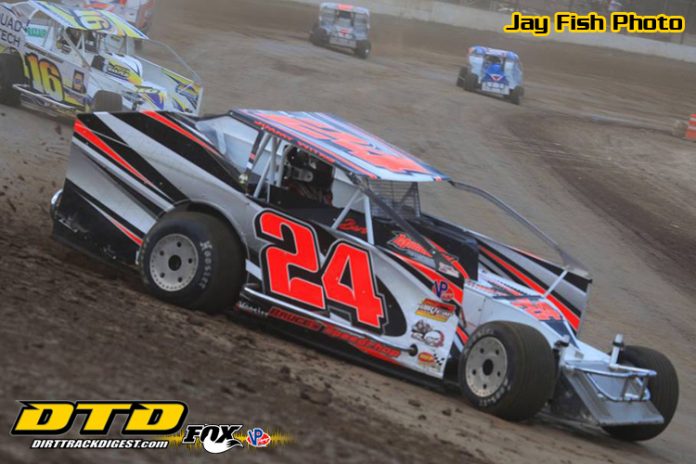 Neither Andrew Ferguson or Jim Wikto have ever won a Modified event at the Brewerton Speedway, but the two faced off for the entire 35-lap feature to see who could crack into the win column first.

Witko and Ferguson made up the front row for the start of the event, with Witko leading the opening circuits. Four laps in, Ferguson had his first taste of the lead, driving past Witko on the top side. A lap eight yellow for a spinning Adam Roberts allowed Witko a chance to regroup, leading the lap after the restart, but Ferguson held tough and regained the lead.

Ryan Bartlett went around to bring out a second yellow on lap 12, where Witko once again grabbed the top spot off the restart, but Ferguson quickly regained the advantage. This time, Witko didn’t let Ferguson get far, as he was able to lead at the line at the halfway mark.

A caution with 18 laps completely reset the close battle once more, where this time Ferguson took the lead away from Witko. Ferguson’s gap was slim to none, as the pair battled side-by-side for a number of laps before yet another yellow flag on lap 25.


Just before the caution came out, Witko had nosed ahead of Ferguson to be scored first, allowing Witko to jump out to a small advantage on the restart. Witko’s advantage did not last for long, as Ferguson fought back on the cushion, charging up to Wikto and drawing even with five to go.

As Ferguson made the pass for the lead, one final caution flew, negating the move and handing the lead back to Wikto. Over the final five laps, Ferguson stayed with Witko but was unable to complete the pass, with Witko beating Ferguson to the finish by a car length to score his first ever Brewerton Speedway checkered

Wikto, a man of very few words, travels up from Clarkes Summit, Pa., to compete at the Brewerton and Fulton Speedways on a weekly basis. With no major sponsors and a crew consisting of himself and his wife, a win at Brewerton really is something special.

“It was pretty good,” said Witko, still shocked. “Not even now was I thinking tonight could be the night we finally could get one. It feels like I won the Daytona 500.”

In Sportsman action, Stephen Denton held off a late charge from Tyler Trump to score the win. The triumph was Denton’s first in seven years in the Sportsman class, but not his first at the track, as Denton has numerous 4-Cylinder victories at Brewerton. Casey Sykes cruised to another Mod-Lite feature win, while Dakota Bechler held off Ray Bechler to score the 4-Cylinder checkered.