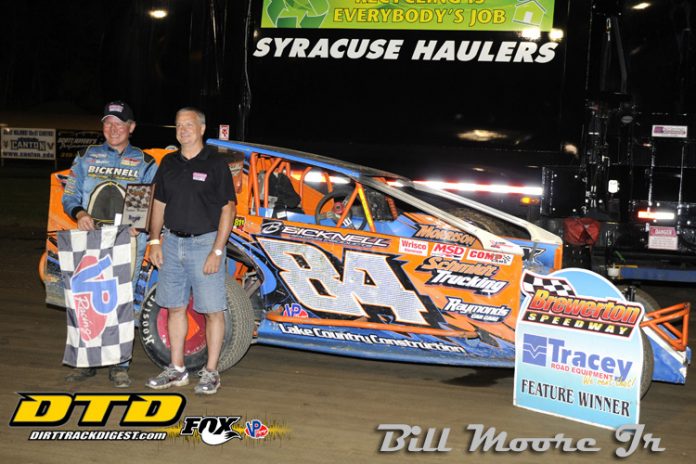 BREWERTON, NY – Gary Tomkins grabbed his first Brewerton win since 2011 on Friday night, swapping the lead and fending off fast cars en route to the victory in the wild feature.

Tomkins and Rich Scagliotta led the field to green at the start of the 35-lap feature event, with Tomkins rocketing out front early. The first of many yellows flew with just five laps completed, as Billy Decker’s night ended early with mechanical issues.

Tomkins had been varying lines early in the event, running up top, down low, and in the middle. On this restart, Tomkins chose the bottom, placing Rob Bellinger alongside.


Tomkins’ choice proved to be the wrong one, as Bellinger launched off the cushion and into the lead when the field returned to racing pace. In typical Bellinger luck, or lack thereof, the motor expired on Bellinger’s #11R Bicknell just three laps after taking the lead.

With 14 laps completed, Tomkins was once again was scored the leader. This time, Tomkins chose the top side for the restart and promptly motored away from the pack.

As flagger Dave Farney’s arm got a break from waiving the yellow rag, a number of drivers took advantage of the green flag run and were making moves towards the front.

Point leader Larry Wight started deep, 18th, and had gotten up to third by lap 21. Trailing him in fifth was Jimmy Phelps, who had also advanced significantly in the first half of the event. Fresh off a second place run last week, Andrew Ferguson had driven from the rear of the field in 22nd up into the middle of the top ten.

The field bunched up once more on lap 25, as John West’s machine slowed in turn two. On the restart, Chad Phelps was able to roll the top to perfection, passing both Larry Wight and second place Jeremy Smith to take the runner up spot. Phelps never had much of a chance to carry that momentum past Tomkins, as the yellow flew just one lap later for West again having issues.

Jeremy Smith looked to be headed to at least a solid top five, but his car failed to fire off the following restart, stacking up the field and collecting many drivers including Scaglitotta, Hulsizer, Pat Ward, Mike Bowman, and Chris Hile.

When the wreckage was cleaned up, the field finally restarted cleanly, and once again Tomkins set the pace with nine laps left. While Larry Wight was able to snatch second from Chad Phelps with a slide job late in the race, he was unable to chase down Tomkins, who cruised to his first Brewerton victory in six years. Wight crossed second, followed by Chad Phelps, Jimmy Phelps, and Andrew Ferguson from last.

“It’s been a long time, and it feels like it took about 80 laps with all the cautions,” noted Tomkins. “We’ve worked so hard on this car all year, but we’ve just had no luck. When Rob (Bellinger) got me, I just picked the wrong lane. Obviously, he had motor problems, but I thought that would have been a great race as our cars seemed pretty equal. Once I got going it was fine, but we have a little peanut motor, so it took a while to get wound up. When it did, it was real good and I could run all over.”

In 4-Cylinder action, Chris Bonoffski dominated the feature to grab another win, taking the victory by nearly half a lap. Casey Sykes got past Brian Meyers at the ¾ mark of the feature to claim checkered in the caution-free Mod-Lite main, his third of the year. While Mod-Lites ran caution-free, the Sportsman division was anything but, as Glenn Forward snuck under Zack Sobotka halfway through the wreck-filled event for the feature victory.