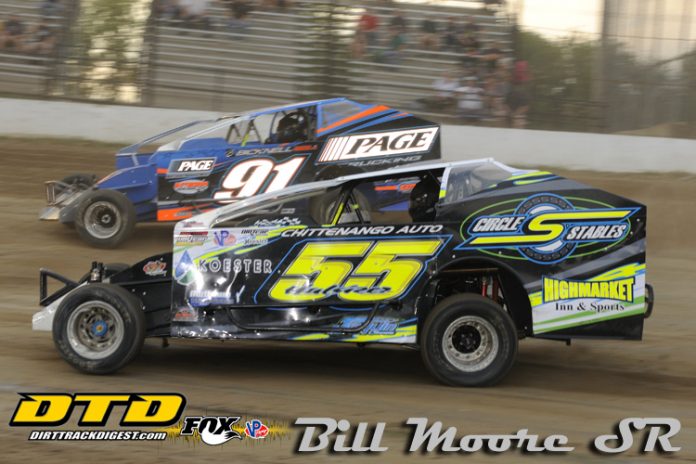 BREWERTON, NY – Fresh off a Super DIRTcar Series victory at Eldora Speedway on Tuesday and another top five run at Sharon Speedway on Thursday, Billy Decker continued the hot streak at his Friday home by picking up the win at Brewerton.

By halfway, a number of drivers fought hard for second, with Bellinger narrowly in front of Mike Bowman, Billy Decker, and Mike Mahaney. The four drivers swapped spots back and forth as the laps clicked off, allowing Scagliotta to open up a two-plus second lead.

On lap 22, Chris Hile’s machine shut down while running just outside the top five, drawing a caution. Like they had on both the initial start and the first restart, Bellinger and Scagliotta lined up side-by-side, with Scagliotta once again choosing the bottom. Unlike the first two times, Scagliotta was unable to drive away, as Bellinger fired well up top.


The top two remained even, with Bellinger being scored the leader by a nose on lap 23 and even less on lap 24, but after that, Bellinger cleared Scagliotta. Just behind Bellinger was Billy Decker, who also snuck by Scagliotta and went after the new leader.

After running door-to-door for a few laps, Decker was able to roll under Bellinger to grab the lead lap 29. Over the final six laps, Decker opened up a big lead and cruised to his third win at Brewerton this year. Bellinger hung on for second, while Mike Bowman, Scagliotta, and Max McLaughlin round out the top five.

“I had a lot of fun racing out there. This whole crew has been working really hard this week, so I got to give this one to them,” Decker said in victory lane. “I thought Mike Bowman was in a better groove than me, so when I got by him I switched to his line, and drove right back by me. It was really fun, it was a nice, racy track out there tonight.”

Todd Root effectively dominated Sportsman action, jumping out front early in the event and opening up a full straightaway advantage. Root was able to hang on to his massive margin for the entire race, easily picking up the win over Ronnie Davis III and Jackson Gill. Brian Meyers fended off all challengers to grab the Mod-Lite checkered, his first ever in the division. Ray Bechler and Chris Bonoffski swapped the lead multiple times throughout the 4-Cylinder feature, with Bechler coming out victorious.