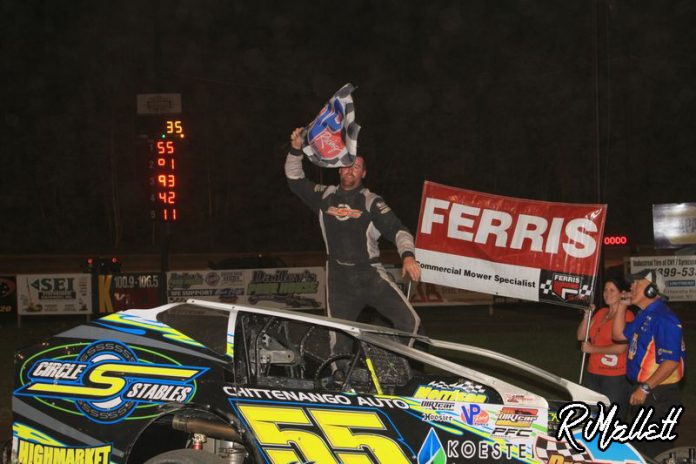 BREWERTON, NY – Matt Hulsizer scored his first win of the year on Friday night, taking the checkered at Brewerton Speedway after holding off a late charge by Billy Decker.  It was his first Brewerton triumph since 2015.

Jeremy Smith and Hulsizer led the 22-car field to the initial start, but early in the race, the green flag could not stay out for long. The first yellow flew on lap two, as Tim Sears Jr. spun in turn two with Jimmy Phelps also receiving damage. When the race resumed, the field stacked before another lap was completed, as a number of cars piled up at the end of the backstretch. One more lap was completed before Jim Witko and Andrew Ferguson slid off the top of the track entering turn three, drawing another caution. Thankfully, the fourth attempt at a clean start was the charm, as Hulsizer drove around Smith to take over the lead.

Throughout the year, Hulsizer had shown good speed after switching from Troyer to Bicknell over the offseason. Tonight was no different, as Hulsizer opened up a big advantage in the middle stages of the race. Ryan Bartlett and Mike Mahaney gave chase, but to little avail, as Hulsizer’s lead peaked at nearly a straightaway just before halfway. At this same time, last week’s winner Billy Decker made his presence know, slipping under Mahaney for third on lap 16. After a brief battle with Bartlett, Decker worked into second, then setting his sights on Hulsizer. With ten laps left, Hulsizer hit thick lapped traffic, and with cars running two and three wide, the leader had no lane to pass.

Decker saw the opportunity given by the traffic jam and pounced, quickly closing the gap between the top two. With five laps remaining, Decker drew even with Hulsizer, showing a nose to the outside as the pair worked through the back of the field. Hulsizer had been married to the bottom groove throughout the event, but knew the win would not be his if he continued to be held up on the bottom. With less than a handful of laps remaining, Hulsizer switched lanes, driving to the top side and putting a lapped car between himself and Decker. The small distance that he gained with his move was all he needed to hold off Decker, as Matt Hulsizer was able to hang on and grab the 35-lap feature victory at Brewerton. Decker crossed in second, followed by Ryan Bartlett, Pat Ward, and Mike Mahaney.


“The car was real good. We’ve been fast all year, but we’ve just had stuff break, just stuff you can’t really prepare for in the shop, but hopefully this will turn it all around for us,” stated Hulsizer. “I got scared there at the end with Billy coming, I just knew I had to get up quick. As soon as I saw him out there, I had to move, luckily I had enough room to get up in front of him and I was able to use the lapped cars to keep him behind me.”