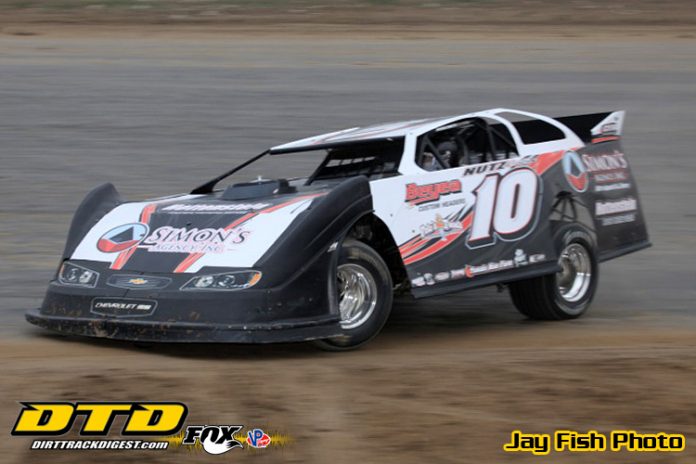 BREWERTON, NY – The lightning was flashing in the sky even before the racing began at the Brewerton Speedway, but the track pressed on and racing continued through high winds, light rain, and ominous skies. While the Sportsman and most of the Modified features were rained out, the Late Models and 4-Cylinders were able to get their races completed.

The Late Models invaded Brewerton for the first time this year, with Kevan Cook and Dale Caswell battling for the lead early in the 20-lap feature. Cook and Caswell have a combined 73 IMCA Modified wins at the track, and the pair battled side by side for a number of laps. By lap five, Cook had won out and settled into the lead, slowly opening up a gap before the first yellow flag on lap 11. Cook maintained a small lead, only losing time once more for the final caution with three laps left. Kevan Cook ran unchallenged in the final dash to the checkered, winning over Dale Caswell, Kyle Sopaz, Bret Belden, and Jason Occhino.

Chuck Powelczyk has had a very bad year by his standards. The almost annual 4-Cylinder champion at the track has had an extensive streak of mechanical and motor issues, relagating him to early exits and poor finishes on the regular. However, Powelczyk finally had things go his way, as he narrowly picked up the 4-Cylinder win, beating Nate Powers to the line by a matter of feet. While Powelczyk started on the pole, his win required more effort than most, as Powers trailed him for the entire feature, trying both high and low to sneak past Powelczyk’s extremely potent VW Rabbit.

While rain had been falling since the beginning of the Late Model feature, it had been light enough to continue racing. Jeremy Smith and Lee Gill led the Modified field to the green, with Smith leading the opening laps. While Smith looked strong on the bottom of the fast and smooth surface, he never had a chance to build a strong lead, as the yellow and then red flags flew on lap four. The rain had picked up to an amount that could not be raced on, and the race was halted. When the Modified feature resumes with 31 laps remaining next Friday night, Jeremy Smith will be the leader ahead of Gill, Tim Sears Jr., and Max McLaughlin.