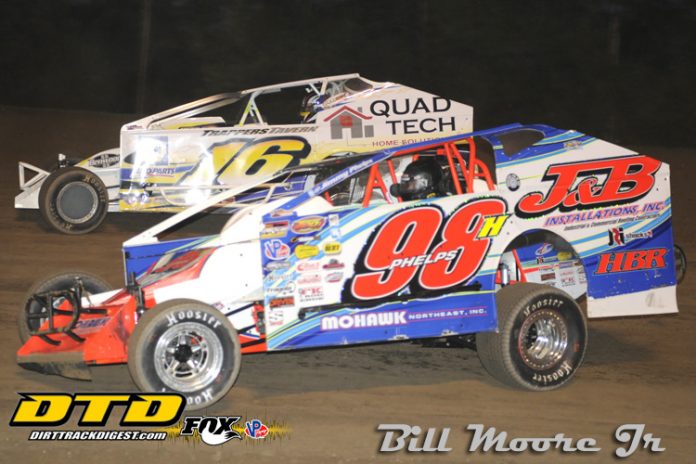 BREWERTON, NY – “The Baldwinsville Bandit” Jimmy Phelps lived up to his nickname on Friday night, robbing the win from Chris Hile with a last lap, last turn pass to claim the Brewerton checkered.

Second starter Hile paced the field in the opening circuits of the 35-lap affair, chased by Jeremy Smith. While Hile looked strong, keeping Smith and Tim Sears Jr. at bay, he was forced to weather a number of cautions early in the event. The first yellow flew on lap four for Jeff Blackburn, then again with 12 laps completed for Ryan Bartlett. By the time the caution for Bartlett’s slowing machine had waived, Jimmy Phelps had climbed from 11th to third. When the field returned green, it seemed third may have been as high as Phelps would get in the running order, as Sears regained the spot.

While Hile was trying to run away, the battle behind him raged on. Sears, Smith, Chad and Jimmy Phelps, and Billy Decker waged war for the runner up spot, swapping lanes and positions every turn. When another caution flew on lap 19 for Mike Mahaney’s mechanical issues, it was Hile in front of Sears and Chad Phelps. The field remained relatively status quo for another three laps before Jeff Blackburn’s ride spun to a stop, and the field restarted once more. However, Tim Sears Jr.’s run came to an abrupt end, as his car shut off less than a lap later, forcing yet another go at the green.

While Sears’ night turned sour, Jimmy Phelps benefited, as he was able to sneak up to second on the restart. For a handful of laps, Phelps mimicked Hile’s line at the top of the track, but ultimately moved to the bottom to both hold off Chad Phelps and try to gain ground on Hile. Jimmy Phelps’ move proved to be the way to go, as he pulled away from Chad Phelps and slowly chipped away at Hile’s lead.


As Dave Farney waived the white flag, Phelps had pulled within a car length of Hile. As the pair raced into turn one, Hile had to alter his line to pass a lapped car. The brief change by Hile gave Phelps the opportunity he needed, as he pulled even with the race long leader down the backstretch. Through the final set of turns, Jimmy Phelps got the drive off the bottom that he needed to pass Chris Hile and snag his first Brewerton win of the year. Chasing the pair at the finish was Chad Phelps, Billy Decker, and Jeremy Smith.

“We were kind of running the same groove as Hile, and it felt like we were both starting to fade a little. I said ‘Why not try the bottom?’ and thankfully we had just enough time to get there,” Phelps noted. “The track was beautiful tonight, the best I’ve seen it in two years, so kudos to whoever did that.”

To say Ronnie Davis III had a good night was an understatement. While Davis is the defending track champion at Brewerton, he was still searching for his first win of the year at the track. Davis got that first win in the holdover Sportsman feature from last week, snatching the lead from Rocco Leone early and cruising to the checkered. The second, regularly scheduled feature was much of the same, as Davis methodically worked his way to the front to score the clean sweep on the evening and placing him right in the thick of the battle for the track title.

In Mod-Lite action, Justin Williams scored his first win since 2012 and second overall at the track, dominating the 20-lap feature. While Williams had been winless for some time, he entered the night leading the points in the division, and with just a few races remaining, looks poised to take his first title. 4-Cylinders were more of the same, as Chris Bonoffski easily drove to yet another win.